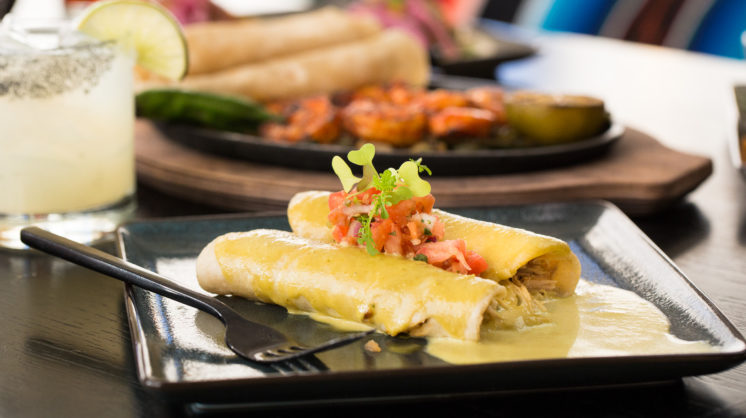 The enchilada wasn’t always the Mexican food staple on U.S. menus that it is today. While the dish dates back to the Aztecs, who made theirs with chili paste rather than sauce, for a couple hundred years leading up to the 20th century, enchiladas were being reclaimed by post-Colonial Mexico and Central America, Meanwhile, the Spanish twists — like cheese, beef and spicy sauce — were taking over as the dominant form of the dish. At the same time, American attitudes toward Mexican staples, many of which entered the American mainstream after the U.S. invaded and annexed Mexican territories, were decidedly negative, no doubt brought on by reactions to the war. Today, enchiladas are everywhere, and their place in American and Mexican restaurants is almost as solid as that of tacos, including many variations of cheeses, meats, vegetables and sauces. Here are 10 Enchiladas You Need to Try around the 405.

Abel’s Mexican Restaurant – This Warr Acres spot is famous for great food and hearty portions. The fajita enchiladas offer a choice of sauces, and it’s impossible to pick wrong, even if you choose chicken enchiladas with chili sauce instead of sour cream. (5822 NW 50th St., Warr Acres)

Azteca Mexican Grill – The enchiladas verdes are made with a tangy tomatillo sauce over the tortillas and roasted chicken. More tangy than spicy, you can ask for a spicier sauce if that’s your preference. (4024 N. May Ave., OKC)

Barrios Fine Mexican Dishes – The short rib enchiladas are made with a thick pasilla sauce, so they’re much closer to the origins of the dish than you’ll find in most places. The braised short rib is tender and flavorful, and the dish is a delicious combination of smoky, umami and tangy. (1000 N. Hudson Ave., OKC)

El Chilango – This Mexico City-style restaurant is known for its mole, and the enmolada is its mash-up of chicken enchiladas smothered in delicious mole. It’s smoky, pungent and a little spicy, and the Luchador motif in the restaurant makes it all the more fun. (4536 S. Penn Ave., OKC)

Hacienda Tacos – New Mexico native Robby Vernon offers an homage to New Mexican food at his two Hacienda Tacos locations, including stacked mojo chicken with a choice of sauces. To get the full effect, go with Christmas style — both red and green sauces. (multiple locations)

Juan del Fuego – Norman has breakfast enchiladas, or brunch if you prefer. The cheese enchiladas come with a traditional red sauce and two eggs … and as everyone knows, eggs make it brunch. (223 34th Ave. SW, Norman)

Tacos San Pedro – Served as an enchilada plate, the TSP version comes with a choice of meats and cheeses, but since it’s rare to get a beef cheek enchilada, it’s hard to choose anything else. (2301 SW 44th St., OKC)

Taqueria La Fondita – More a taqueria than a full restaurant, these MidDel concepts offer a variation of deshebrada or machaca in their shredded beef enchiladas. Being as they are a taqueria, the sauces are excellent. (1709 S. Sunnylane Rd., Del City)

Zarate’s Latin and Mexican Grill – This Edmond institution serves up food from all over Mexico and Central and South America, and has thoughtful vegetarian options. The garden enchiladas feature fresh tortillas around spinach, onions and guacamole. (706 S. Broadway, Edmond)