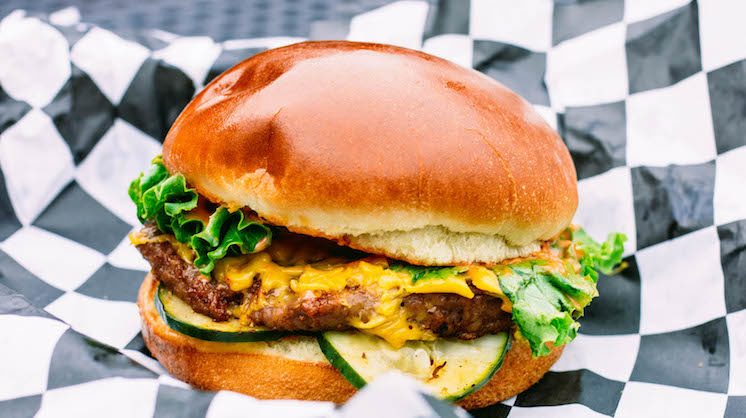 Veggie burgers have come a long way in the past decade. The original plant-based burgers were, frankly, awful. The texture was all wrong, the flavors way off, and the color … yeesh. Many restaurants now opt for Impossible or Beyond Meat options, and others stick with the tried and true (and usually delicious) black bean patties. Others make their own in house, an effort that is always appreciated by the vegetarian community. Here are 10 Veggie Burgers You Need to Try Now around the 405.

Bee Healthy. While it’s not a burger in the sense of a bun, the spicy black bean burger works very well as a wrap. Don’t worry too much about the “spicy” part. It’s only three out of 10 on the heat scale.

Burger Punk. Already a standout in the burger game, this just-off-the-Paseo burger joint has a Beyond Meat patty as the star of Green Daze. The American cheese and punk sauce amp up the flavors, and the house pickles add a zippy note.

The Garage. You can sub their garlic-quinoa patty on all the burgers, but try it on the Spicy Guacamole Burger for sure.

Patty Wagon. Since they already make one of the best burgers in the city, it’s no surprise that their Southwestern Veggie Burger is excellent. It’s a black bean patty with roasted corn and tomatoes, topped with avocado and the works.

Picasso Cafe. They’ve been cooking for vegetarians longer than most restaurants in the city, and it’s still a popular destination with the plant-based crowd. The quinoa-black bean burger still ranks high on the list of most vegetarians in the 405.

The Press. One of the more interesting combinations in the metro is the beet-based burger at this Plaza restaurant. They add spicy honey, goat cheese and arugula for a complex array of flavors.

Pub W. The most underrated of the Hal Smith restaurants, Pub W serves excellent food at all their locations, and like any good pub, they serve it in hearty portions, including their burgers. Sub the vegan quinoa patty on any of them, and adjust the toppings accordingly.

Red Cup. Chef Patrick Clark II has been working to perfect meat flavor in plant-based food since he switched to a vegan diet. The result is a roster of burgers that are deeply flavorful and satisfying.

S&B Burger Joint. The patty is made in house, and you can substitute it on several of their burgers, but the New Skinny is built to be a veggie burger.

Tucker’s Onion Burgers. They use Impossible “meat” at Tucker’s, but you won’t be able to tell it’s not the real thing once you load on the grilled onions, lettuce, tomato and pickles.