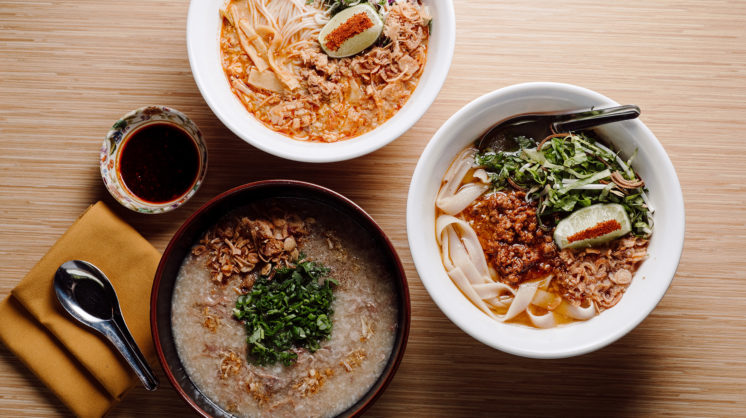 When Chef Jeff Chanchaleune announced that he’d be opening a restaurant with traditional Lao food in the former Goro location at 1634 Blackwelder, fans of the James Beard-nominated chef’s cooking were rightly excited. It’s fair to say Chanchaleune has delivered on the promise of a cuisine that is not familiar to most people in Oklahoma City.

Ma Der is an homage to and extension of Chanchaleune’s family recipes, specifically the food his Laotian grandparents and parents made throughout his life: nam khao, papaya salad, mushroom stew, larb, pork sausage, and sticky rice. The food is flavorful, complex, and satisfying—and because we are mostly unfamiliar with it, every meal feels like a bit of an adventure.

Every city needs a regular infusion of new flavors. Imagine Oklahoma City’s culinary landscape had Vietnamese immigrants not arrived in the 1970s, or without the delicious influences of Guatemalans, Mexicans, and Pakistanis. Each wave brings new flavors, spices, techniques, and dishes, and they increase our appreciation of their culture via their food.

Lao immigrants arrived with the Vietnamese evacuees, but many of them continued on Interstate 40 to Amarillo or other destinations around the country. Their community has been small, and their cuisine largely represented in Thai style (they are neighboring countries, and there are distinct similarities in the food) on menus around the city. Chanchaleune is one of a handful of Lao chefs who want to change the perception of Lao cuisine in OKC, but it’s a struggle to get people to take risks on dishes they don’t know or can’t pronounce. Get them to try the food, though, and they’re hooked.

One of the ways Ma Der is influencing our culinary landscape is in Chanchaleune’s soup rotation: khao poon on Tuesdays, khao piek (duck porridge) on Wednesdays, and khao soi on Thursdays. The former is a curry, the middle a traditional porridge with shattered rice, and the latter a life-changing, deep dive into flavors inspired by the very best of Lao cooking. In keeping with his approach, the khao poon is from his mother’s recipe, the khao soi and porridge from his father’s recipes, all with cheffy tweaks.

“They’re really meant to be a meal in themselves,” Chanchaleune said, “but I see people sharing them all the time. The porridge is the easiest to share.”

The khao soi (cut rice in Lao) is made extraordinary by the use of a pork and tomato broth that uses pork fat and ground pork to amp up flavor, mouthfeel, and richness. If Laos got into the Bolognese business, they’d do well with this entry. The dish is rounded out with crispy, fried shallots, a lettuce-herb blend, and long green beans. Be sure to ask for the chili oil if you like more heat.

“We’re going to focus on the soups on weekdays,” Chanchaleune said, “and then we’ll rotate other specials on weekends.” That means a perfect introduction to Lao cuisine via a hearty bowl of soup at lunch awaits every Tuesday, Wednesday, and Thursday.