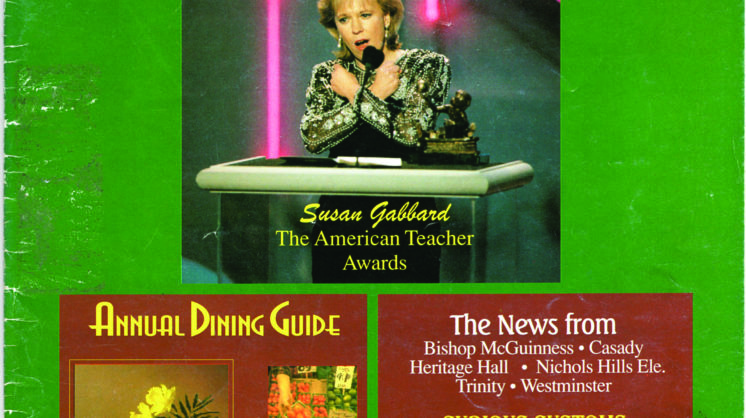 In 1996, the leadership of Nichols Hills approached Mark Mattison to ask about a newsletter for their community. Cynthia Whitaker-Attalla, the magazine’s current Executive Director of Advertising, was the original sales rep for the young company and is the only remaining team member since that time. She remembers Mattison’s response.

“He wanted to help, but he thought newsletters were tacky, so he told them he’d do a magazine,” she said. “The first issue came out in February 1997, and we haven’t missed a month since.”

The January-February issue of 1997 was the very first Nichols Hills News, a fact we almost missed because a misprint on the cover had it as 1996—not the most auspicious beginning. The first issue had separate pages for Casady, Heritage Hall, and Bishop McGuinness, as well as elementary school news, a home feature, and “restaurant row news,” with stories about The Metro, Coach House, Iguana Lounge, and Portobello … three of the four of which are no
longer with us.

Mattison Avenue Publishing would go on to produce Edmond Monthly (beginning in 1998), Norman Living (1999), Historic Living, Quail Creek News (later Northwest Style), and Downtown Monthly, a new one each year. It published a magazine for Amarillo, a sports-centric one called Sooner U, and Metro Design (2000), which became 405 Home. When Hadley Capital acquired the company in 2010, the five magazines operating at the time became Slice, which then became 405 Magazine.

Jordan Regas, the publisher of 405 and president of Hilltop Media Group, was looking for inspiration to start a city magazine in Corpus Christi, Texas, when a printer in Colorado sent him a box of samples. Mixed in was a copy of Slice. “I remember thinking it was a great magazine, with lots of stories about the community and people, and I took some cues from that issue,” Regas said.

When Regas was planning to expand his media company to a larger network of community magazines, he learned 405 was for sale. “I didn’t connect the dots at first, but as I started to research the magazine, I realized it was the evolution of Slice,” said Regas. “I believe this magazine has held on through various owners and iterations because of a great community that has invested in it and stood behind it.”

When thinking about the future, Regas doesn’t think in terms of just magazines anymore. “We’ll always have strong community magazines that tell the stories of the people and places, but publishing is changing,” he said. “Print isn’t dead, and rather than see digital as a threat to print, we’re looking at both as different aspects of a larger media company, with more places for people to get involved; to not just read, but interact via events, digital platforms, webinars, classes. We will use various media to tell the stories and listen to the stories of the city coming together to make us what we are: a vibrant, thriving, exciting community.”