An Architectural Tour of Neighborhoods in Oklahoma City - 405 Magazine 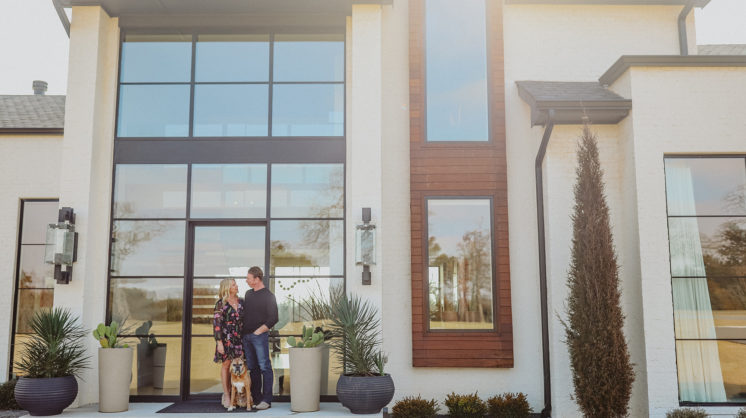 The largest city in the 405, Oklahoma City, started with a bang and has expanded in fits and spurts ever since. In about 120 years, it’s grown from one square mile dotted with tents to more than 630 square miles filled with people and neighborhoods of every description. It’s so big it eclipses Los Angeles and Dallas in area by an average of 200 square miles.

Few people know more about our capital city than Lisa Chronister and Katie Friddle. Both are huge fans of architecture, neighborhoods, OKC and urban planning. Both work for the City of Oklahoma City. Chronister is the assistant planning director and Friddle is principal planner and historic preservation officer.

Friddle explained that – while it may perhaps come as a surprise to modern readers – the driving force behind the sudden eruption of Oklahoma City wasn’t actually oil. “Oklahoma City’s location was decided because of its proximity to the railroad,” she says. More rail lines quickly developed and the city became a transport hub, with Model Ts and agricultural products rumbling in and out of town.

Our first neighborhoods popped up near the rail lines. “None of those are here anymore,” Friddle says.” They were in what’s now downtown. A handful of pre-statehood homes have survived.” Those can be found, if you’re feeling sleuthy, in the Cottage District (bordered by NW 13 Street, NW 6 Street, N Classen Boulevard and N Robinson Avenue) and inner-south Oklahoma City.

South and west of Scissortail Park, Chronister said, was a neighborhood filled with Czechoslovakian and other Eastern European immigrants. The Czech Hall, 515 NW 6 St., was built in 1924 and was an anchor for the surrounding residential neighborhoods.

Oklahoma City has grown in roughly concentric rings, but also in bursts as new transportation and other technologies made new neighborhoods desirable and possible. “Our first sort of wave of expansion was from about 1904 through the 1920s,” Friddle says. It was the installation of streetcar lines that brought us such neighborhoods as Classen Ten Penn, Miller, Gatewood, Linwood, Mesta Park, Heritage Hills, Crown Heights, Edgemere Park, the Paseo, Putnam Heights, Jefferson Park – really the historic neighborhoods of Uptown and the Urban Core.

“The real sprawl began in the mid 1950s and 1960s. The city annexed hundreds of acres, and neighborhoods exploded,” she says. The American lifestyle also became more automobile-centric so mixed use, walkable neighborhoods, which are now back in vogue, fell out of favor and were replaced by post-war, Mid-century suburban ranch-home neighborhoods with bigger yards and more space to spread out. This brought us Belle Isle, Cleveland, Venice and also neighborhoods in south Oklahoma City. Shepherd neighborhood, located from NW 23 Street to NW 30 Street, between N Pennsylvania and Villa avenues, is a transitional neighborhood with 1930s brick bungalows and minimal traditional homes, a precursor to the 1950s ranch-style homes. The 1960s and ’70s brought us neighborhoods such as Quail Creek and Val Verde.

Oklahoma City is a perfect example of the evolution of American neighborhoods and architecture. Within its borders and in adjacent communities lie homes of every description. We’ve assembled a greatest hits list, with focus on a handful of key architectural styles: Victorian, Craftsman Cottage, Traditional, Mid-Century Modern and Contemporary.

Victorians of the 405: From Norman’s Old Silk Stocking District to Midtown OKC and beyond

Beautiful examples of Victorian architecture, some of the finest in the state, can be found in a handful of blocks dotting central Oklahoma. Victorian homes are easy to spot and can be summed up in one word: ornate. They feature colorful, ornate facades, patterned brick, embellished roof lines, fancy millwork, eclectic window shapes and sizes and wide porches. Really, several styles fall under the Victorian parasol, including Gothic Revival, Queen Anne and Folk Victorian. When most of us think ‘Victorian,’ we probably think about iconic homes, like the Painted Ladies (also known as the Seven Sisters) along Alamo Square in San Francisco, featured in the opening sequence of the late ‘80s sitcom “Full House.” Those are in the Queen Anne style.

Closer to home, some terrific Victorians can be found in Norman, Oklahoma City and Guthrie. Norman’s Old Silk Stocking District (so called because the ladies who lived there could presumably afford silk stockings) is bordered by Robinson Street to the north, Front Street-N Jones Avenue to the west, Porter Avenue on the east and E. Main Street on the south. It was a swanky place to call home at the turn of the 20th century. 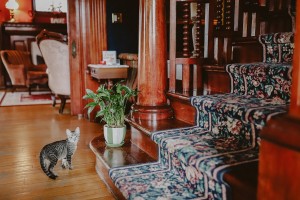 You’ll find the Moore-Lindsay Historical House Museum in Old Silk Stocking, a fine example of the late Victorian Queen Anne style. A few miles up the highway in Oklahoma City’s Heritage Hills neighborhood, the Henry and Anna Overholser Mansion is also open to the public and is a stunning Queen Anne and Chateauesque architectural specimen. Victorian architecture is everywhere in Guthrie, but especially downtown, which features excellent Victorian commercial structures as well. 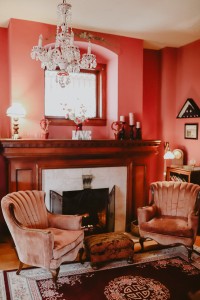 Our Lady of the Craftsman Cottage

Cody Thomson, partner and part of the third generation to hold court at her family’s 60-plus-year-old design firm Thomson + Thomson, lives in a Craftsman cottage in the 38th Promenade neighborhood, with her massive Labradoodle Corn Nut. She’s just down the street from the happening, newly revived Bradford House boutique hotel. Her home also enjoys status as part of the Western Avenue District and is across the street from the historic Crown Heights neighborhood, platted in the 1930s. Fun fact: the sculpture in her front yard is a Pokemon Go landmark. 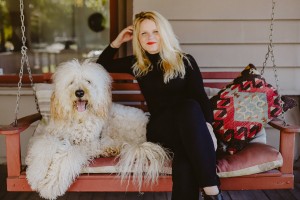 Thomson chose her home carefully, for reasons of convenience, aesthetics and personal joy. It’s been her sanctuary for a decade. Her ideal neighborhood is walkable. She says, “I love my proximity to restaurants, pubs, shops and bakeries. I get an old-fashioned feeling when I walk down Western to grab a beer or buy fresh flowers.” Because the nearby establishments are small in scale, residents and business owners are able to co-exist. 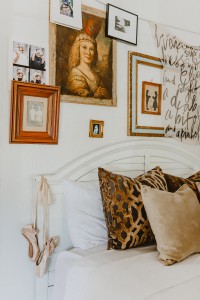 She learned a lot about this delicate balance when her family’s company decided to build its studio on the land directly north of her house. In the beginning, she said, her neighbors were concerned that a commercial establishment would disrupt the vibe of their neighborhood. “But when they learned of the studio’s low-impact and historically inspired design, they embraced us with open arms. It was also helpful for them to know that I was a resident too, and therefore had no intentions of disturbing the integrity of the quaint neighborhood,” Thomson says. 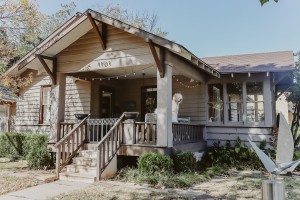 “I love when architecture evokes or encourages a lifestyle. The house was built in 1917 and when I think of this era, I think of people spending more time waving at neighbors than hunching over computers. The porch is a daily reminder for me to slow down and embrace a slower-paced way of life.” 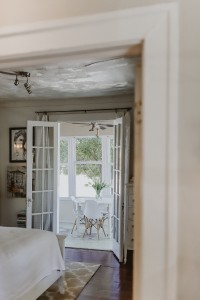 Thomson finds that the cottage-bungalow design melds easily with her own personal style. “The shape of a bungalow reminds me of what a child might draw on a sheet of paper if asked to draw a home. There’s beauty in its simplicity. I love the small scale, window proportions and gable roofline. My personal style is eclectic, which translates well to a bungalow. I’ve always been torn between my love for modern and traditional design styles, so I try not to let one style overrun the other in my home,” Thomson says.

While Thomson tends toward symmetry when creating designs for clients, it’s a different story when she’s designing her own space. “I come from a family of designers and artists. I wanted my house to allow for a blend of meaningful accent pieces – sculptures by my great aunt, figure drawings by my sister, renderings by my grandfather, photographs by my brother. The layout of my house and my random collection of accent pieces lend themselves toward an eclectic, asymmetrical design.” 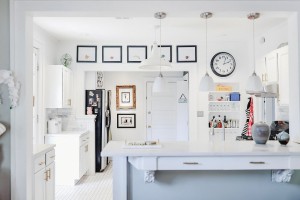 A (mostly) lifelong Oklahoma Citian, she lived in Belle Isle and Nichols Hills as a child. “There’s a fascinating connection between the Crown Heights area, where my home is now, and Nichols Hills. In the early 1900s there was a golf course located on the land that is now Crown Heights. After a handshake land swap, the golf course was moved to Nichols Hills, where it still exists today. My house is said to have been the caddy shack for the old golf course!”

When we think about traditional architectural styles, we’re probably thinking of a handful of styles including Colonial, Federal, Georgian, Dutch Revival, Greek Revival, Tudor Revival and their ilk. These are typically two-story homes, and these traditional styles share details including mid- to steeply pitched roofs, use of columns and arches, symmetry, friezes and two-room deep center passage or four-over-four floorplans. Great examples of these styles can be found in Norman’s Southridge Historic District, as well as Oklahoma City’s Heritage Hills, Crown Heights and others. 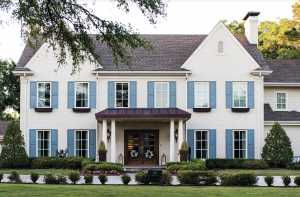 Original Mid-Century Modern homes were built after World War II and were equal parts architectural style and lifestyle driven. The advent of the automobile led to a Mid-Century Modern hallmark: the attached garage. Characterized by a contemporary, slightly futuristic aesthetic and an emphasis on function, the movement influenced many types of design. OKC artist Matt Goad has created a Mid-Century Modern oasis in his home in the Edgemere neighborhood. Since purchasing it in 1998, Goad has slowly collected pieces that augment the home’s architecture. 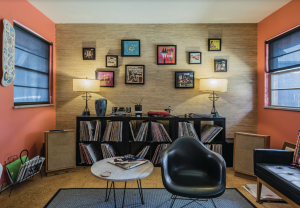 “I began collecting Mid-Century Modern furnishings as a college student. I’d go to thrift shops and find Eames chairs and little vases, or a funky fiberglass cone lamp. I’m always more proud of a piece I’ve found in the wild,” he said in a 2018 interview. “This house had been for sale for at least a year … So, I called and went to look at it. I knew when I walked in and saw the fireplace – two steps in and I knew I wanted to live here.” 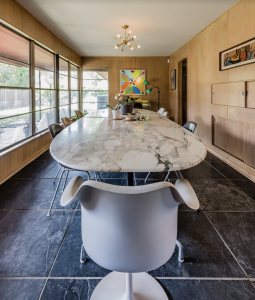 In the 20-plus years that Goad has owned the home, he has maintained a devotion to authenticity that continues to inspire.

Another umbrella term, Contemporary architecture is a movement in which multiple modern styles blend. It’s a bit of a misnomer, though, because Contemporary can be used to describe new structures or buildings that are 80 years old. Because there are many styles, it is tricky to come up with a formal definition to describe the movement, but you know it when you see it.