A Beefy Recipe to Help Try a Little Tenderness - 405 Magazine 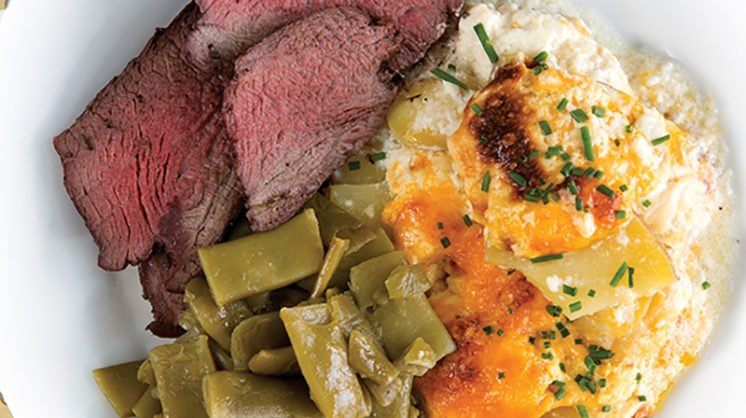 A Sea Captain Once Told Me … (Bet You Never Expected A Recipe To Start Like This) His Secret To Beef.

His name was Captain Jimbo and boy, could he cook. We met in Singer Island, Florida, and became friends; Jimbo and I would drink coffee on the dock every morning and talk about all things food. One evening he invited my family to a cookout dockside. I assumed we would have fish, but he surprised us with a beef tenderloin that lived up to its “tender” moniker more than any other I have eaten in my life.

His recipe is quite simple and the instructions are very clear: NO SALT until right before it goes on the grill. You must only use sea salt to season this steak – it has the same chemical components as table or kosher salt, but the finer “impurities” (the components that travel with the salt in the sea) give it distinctly different flavors based on its point of origin. Salt is actually the base for flavor development in food; it’s important! I encourage giving this a try in lieu of your favorite T-bone or ribeye next time you fire up the grill.

If you’re going to cook steak, you have to make potatoes. To make insanely rich au gratin potatoes, it comes down to a few secrets. Number one is to use freshly grated cheese, none of that store-bought pre-grated junk. Second, use russet potatoes. They have a higher starch content and hold up better when baking in cream. Follow these rules and you’ll be set to have an unforgettable meal … one fit for the captain’s table.

► Place the trimmed beef tenderloin in a resealable plastic bag. Add the olive oil, rosemary, garlic and cracked pepper. Seal the bag and rub the mixture all over the meat. Place the meat and marinade in the refrigerator to marry overnight.

► Remove the beef tenderloin from the fridge one hour before you plan to cook it, so it can come to room temperature. Preheat grill to medium high heat. Fifteen minutes before you place the meat on the grill, rub the beef tenderloin with the sea salt. Give it a good massage. Allow it to rest. Place the meat on the grill and cook until all sides are nicely marked by the grill and the internal temperature comes to 120°F to 125°F for rare or 125°F to 135°F for medium rare using a digital thermometer. This should take between 25 to 35 minutes depending on the heat of your grill. Transfer the beef tenderloin to a cutting board and tent it loosely with foil. Allow it to rest for 20 minutes before slicing.

► Preheat the oven to 400 degrees. Rub the softened butter all over the insides of a large baking dish. In a large bowl, whisk together the whipping cream, whole milk, flour, garlic, salt and pepper. Place  of the sliced potatoes on the bottom of the baking dish and then pour  of the cream mixture over the top. Repeat until all of the potatoes and cream mixture are in the baking pan. Cover with foil and bake for 25 minutes. Remove the foil and sprinkle the potatoes with cheese and continue baking for 15 minutes or until potatoes are bubbly and lightly brown on top. Remove from the oven and allow the dish to cool 10 minutes before serving.