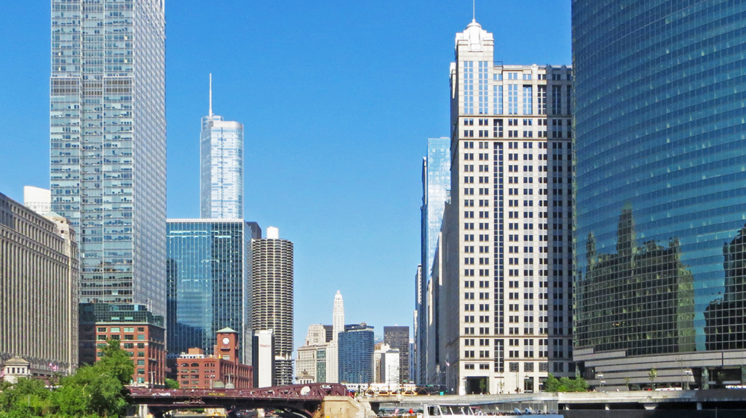 Chicago is like a great big banquet – so many choices, and we had so little time. My husband Jack and I made a 24-hour stop in the “Toddlin’ Town,” which meant we didn’t have time to toddle, meander or even stroll. To reference The Blues Brothers, we felt like we were on a mission from God. Our mission: to cram as many items on my bucket list as possible into our visit. Here, in order of our exploration, is my Top 10 list for the time-limited traveler.

There are several ways to get high in Chicago; the Skydeck Chicago atop the Willis (formerly Sears) Tower is the highest at 103 stories – and features glass balconies for those who can handle them.

We chose the not-quite-as-high 360 Chicago atop the John Hancock Building because it was closest to our route, and with 94 floors, it was plenty high for us. Windows all around give a great view, especially with its proximity to the shore of Lake Michigan. We had an express pass, so waiting in line was not a problem (more about that later). The elevators, traveling at nearly 20 miles per hour, provide a swift and ear-popping ride. For those wanting an extra thrill, TILT is an enclosed steel and glass platform that moves 30 degrees from vertical, allowing participants a breathtaking view of the city over 1,000 feet below.

The last time I was in Chicago, when I was 12 years old, my dad took us to the Drake Hotel for lunch at the Camellia Room. I felt like a princess, and the memory has lingered. The Camellia Room is still there – for breakfast and special events. But I was not to be disappointed; the Palm Court, where we had reservations for tea, is as over-the-top glamorous as any movie set. White columns, white draperies, explosions of white blossoms and a harpist set the stage for a new memory.

We chose from 17 teas and were served dainty sandwiches and cakes on a three-tiered server. Queen Elizabeth, Princess Diana and the Empress of Japan have all had tea at the Drake. It took me an hour to get my pinkie back in place.

The Magnificent Mile, Michigan Avenue from the Chicago River north to Oak Street, is Chicago’s Fifth Avenue or Rodeo Drive. Noted for upscale boutiques, the street is lined with flower beds and trees, and window shopping is a major attraction. Look for famous names like Chanel, Ferragamo, Tiffany and Cartier.

The Drake is at the north end of the Magnificent Mile; just south is the Fourth Presbyterian Church, a Gothic Revival masterpiece. The carved wooden ceiling is reminiscent of a ship’s hull. Fourteen carved angels, each seven feet tall and playing a different instrument, stand high above the congregation. The stained glass is stunning, and the ivy-draped exterior features a lush courtyard where summer noontime concerts are held.

Everyone has an opinion … but I don’t know how you could beat Exchequer. We chose it because it was within walking distance of our hotel, and boy, did it turn out to be a great decision. The building has held a restaurant since the ’20s, when its first occupant was a speakeasy frequented by Al Capone. It’s been the Exchequer since 1969, and the pizza recipe is still the same: baked in a deep pan, with triple the fillings of the average pizza. We ordered a medium and still took a to-go box. The only thing better than cold pizza for breakfast is hot pizza for dinner. 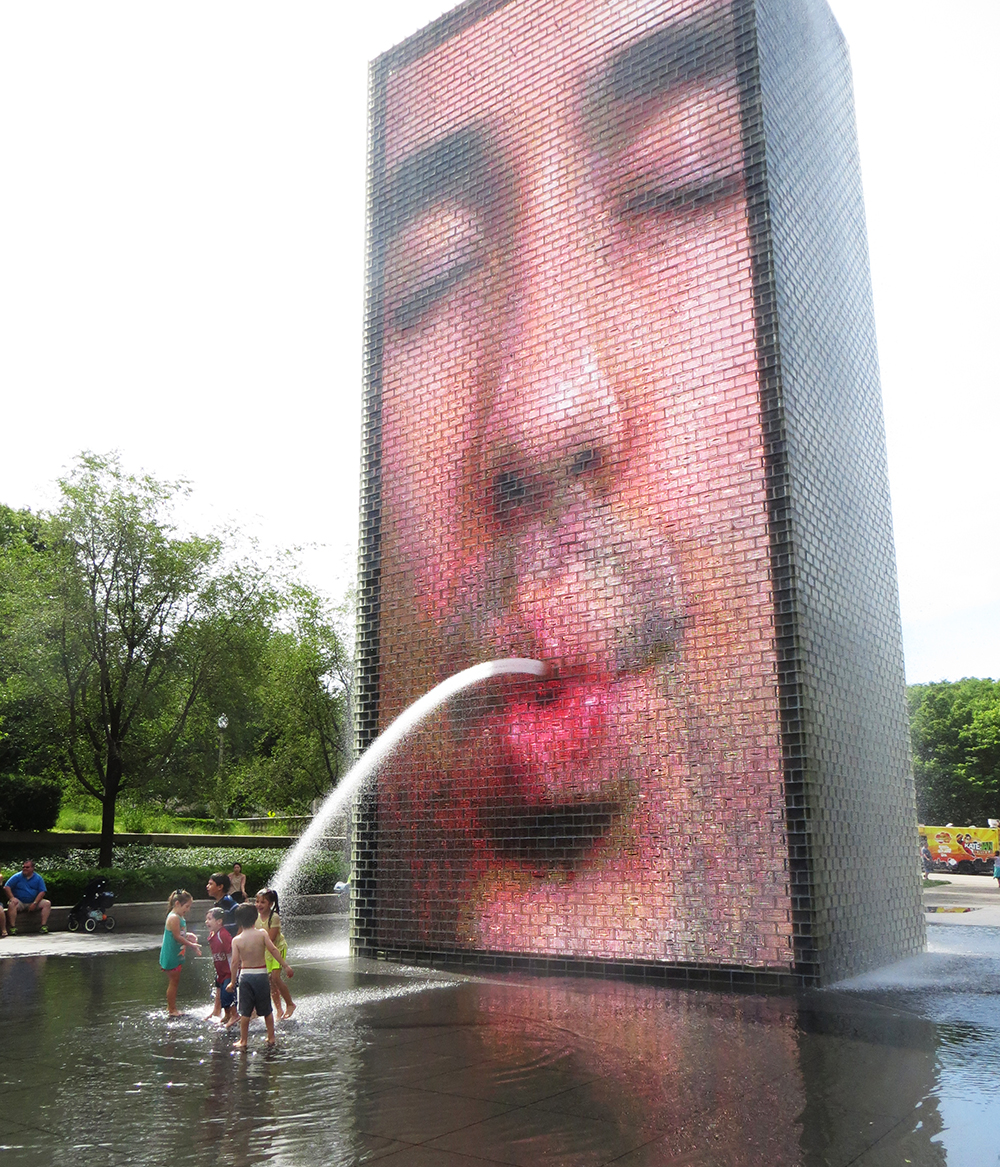 What a great public space! We only explored a small corner, since we wanted to stay close to the Art Institute where the line was building an hour before opening, but it was wonderful. In the southwest corner of the park, the Crown Fountain consists of a shallow reflecting pool of black granite, 232 feet long, that’s bookended by 50-foot glass block towers. An LED display on the towers features faces of Chicago residents. Periodically, water spews out of the towers, seeming to come from the mouth of the individual pictured. It was warm when we were there, and children were playing in the shallow water – shouting with laughter when the fountains sprayed them. Just north of the fountain is another public art installation, this one a shiny, elliptical piece. Its name is Cloud Gate, though locals call it The Bean.

Always high on lists of the best art museums in the country, the Art Institute of Chicago is home to an amazing array of paintings, sculptures, decorative arts and much more. The Impressionist collection is outstanding, as is the collection of American artists’ works. The oldest portion of the museum is classic; the newest, the Modern Wing, was designed by Renzo Piano. A pedestrian bridge connects this part of the museum to Millennium Park.

Along Lake Michigan, Grant Park is a 319-acre green space dating back to 1835. Foresighted citizens pressured the city to save the lakeshore from commercial intrusions. It stretches from Millennium Park on the north to the Shedd Aquarium, Field Museum and the Adler Planetarium on the south. Its centerpiece is the massive Buckingham Fountain, one of the largest fountains in the world, consisting of basins stacked like a wedding cake in the center of a large pool. Its 134 jets spray 14,000 gallons of water per minute. Dancing waters shows are presented on the hour throughout the day, with lights and music added at night, and it’s in operation from May through mid-October, depending on the weather.

Completed in 1930, the Shedd Aquarium was built in the Beaux Arts style of the Art Institute and the Field Museum. It was the first inland aquarium with saltwater tanks in addition to freshwater; a million gallons of sea water from Key West were transported to Chicago to fill the tanks. Additions in 1991 and 2003 almost doubled the space in the aquarium. The Abbott Oceanarium is home to beluga whales, white-sided Pacific dolphins, sea otters and seals, while the Wild Reef is inhabited by sharks, stingrays and many varieties of live coral.

10. The Field Museum of Natural History

Parts of the collections in the museum predate the building – they were exhibits gathered for the 1893 Columbian Exposition. With the popularity of the exhibits, the idea of establishing a permanent museum took root. It was 1921 when the doors of the present building were opened to the public. The Field was the first museum to exhibit African elephants taxidermied in a realistic manner, thanks to Carl Akeley, considered the father of modern taxidermy. Next to the elephants is one of the museum’s biggest stars: Sue, the largest, most complete, best preserved Tyrannosaurus rex in the world. At 42 feet, she’s a whopper.

The breadth of exhibits in the museum is mind-boggling – archaeology, paleontology, biology, geology. I’ve run out of ologies but I’m sure they have more! 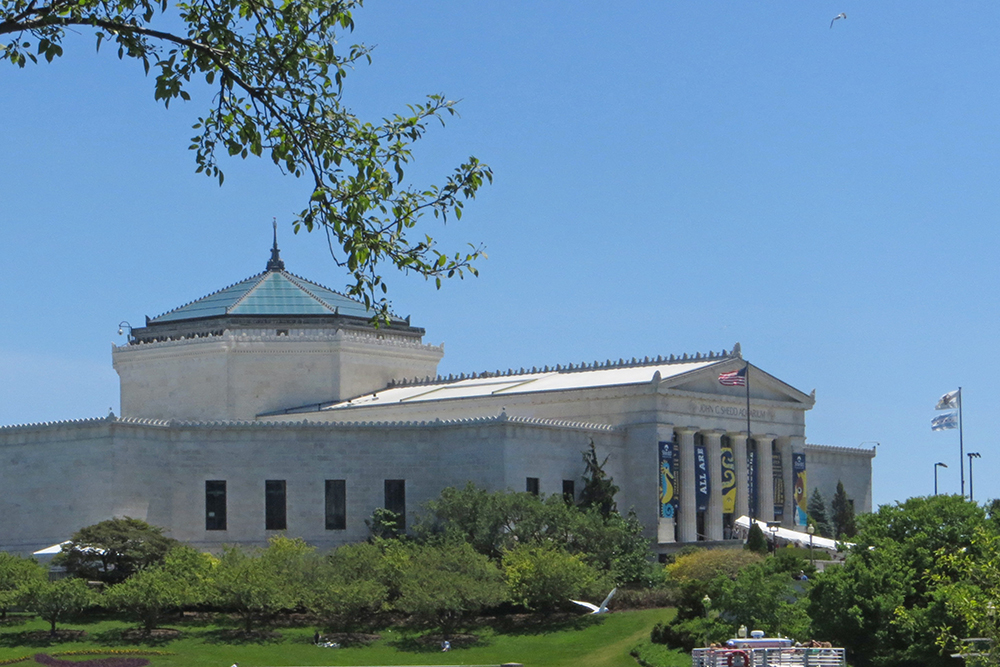 You really don’t want to drive your car into downtown Chicago. Parking is difficult and expensive. Instead, investigate CITYPASS. I was shocked at the general admission prices at the museums and attractions, but with CITYPASS, you can also get expedited entrance, giving you more time to see more.

We were hosted by the Virgin Hotel in the 1928 Art Deco-style Dearborn Bank Building. It has no fancy lobby, and while a number of historic touches have been preserved, the rooms are strictly 21st century. Amenities include lots of tech features, but my favorite thing was the little red refrigerator – just fine for our pizza. Best of all, it was within walking distance for everything on my bucket list.

For more information, go to choosechicago.com.