A Contender of Note - 405 Magazine 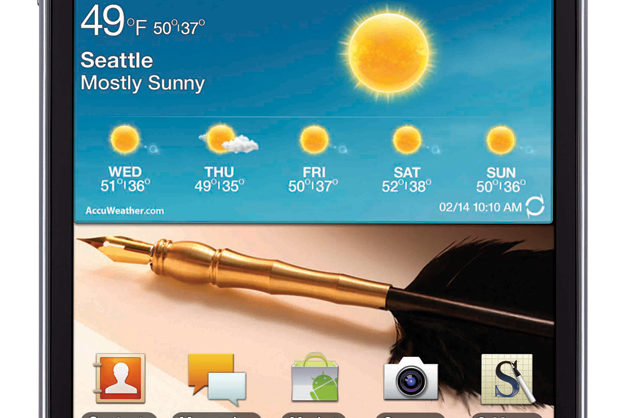 At first glance, it looks like Samsung is out to steal some thunder from Apple and Amazon with the introduction of the Galaxy Note device. I got to play with one for the last couple of weeks, and here are my impressions:

It’s bigger than the iPhone 4 (3.25" wide versus 2.5"), but still fits nicely in my oversized hand. It has a built-in stylus that helps when you have fat fingers and enjoy using the stylus like I do. It has front- and rear-facing cameras with video and all the usual buttons, bells and whistles.

I like the home row, where you have some of the main controls for the device, and I wish Apple would do the same thing. It’s nice to have the ability to go back or home or straight to Google from those keys.

So what’s cool about it? For starters, it handles media pretty well. Streaming video over the Internet from YouTube worked very well and the sound quality is what I have come to expect from a portable device. Android devices like this one seem to have a lot more built-in functions than their Apple counterparts. This phone is also 4G where it’s available (3G everywhere else), so in those areas your data and phone service are as fast as they can be. (The Apple 4 and 4s are 3G phones.)

Reading from the internet and from the Kindle app works very well, and I like the larger screen size for this alone. Web surfing is really fast with a 1.5 GHz processor and a gig of RAM. The wi-fi chipset works with all the normal 802.11, which is what you are going to find in most hotspots. I have used it to download video and browse the Internet at home, and the speed was great.

The GPS system also works like a charm – in fact, with the size of this screen, you can just use the Galaxy Note and get rid of your old GPS unit.

The downside? The battery life is okay, but charging time seems pretty slow. The sound is not as clear as I would like at higher volumes, but is very clear at moderate levels.

A person with smaller hands would not be as comfortable holding this device as someone my size, and it will not fit well into skinny jean pockets. On the other hand, it does fit into less restrictive jean pockets and jackets, where my Kindle Fire doesn’t.

I think of the Galaxy Note as a smaller cousin to the Kindle Fire with a built-in phone. There is a niche out there that Samsung built the Galaxy to fill, and I think they have done a fine job.

A photographer, computer consultant and self-avowed “media junkie,” Michael Miller has spent 20 years learning the ins and outputs of desktop computers and small networks, hardware and software, while developing an abiding love for technology and its continually evolving impact on everyday life.