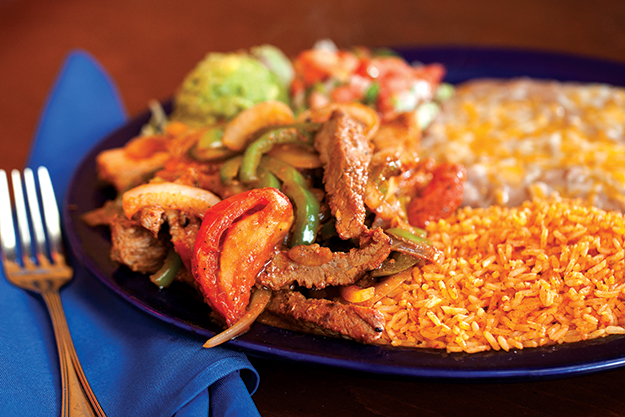 Step inside and it becomes obvious the owners have taken that phrase to heart; this isn’t your typical Mexican restaurant. Soaring ceilings, bubbling fountains and sparkling mosaic tile invite guests to enjoy a unique dining experience.

The lushly landscaped patio area allows customers to kick back in their shorts and flip-flops while enjoying an adult beverage. Meanwhile, the incredible aroma wafting from the kitchen gives a tantalizing hint of the culinary pleasures to come.

Casa de los Milagros came into existence on Christmas Day, 2009; but the restaurant’s history goes back a bit farther than that. Much farther.

It was 1937 when Luis Alvarado opened what is widely considered Oklahoma City’s first Mexican restaurant.

“My great-uncle opened El Charro that year when he was only 32 years old,” said Julian Gonzalez, Milagros general manager. “Most local historians believe El Charro was the first Mexican restaurant in Oklahoma City, and certainly it was the first to last more than just a few years.”

Alvarado got his start in San Antonio, working on a machine in a factory that made tortillas. The technology was new at the time, and the owner of Dallas’ “El Fenix” restaurants bought one of the tortilla machines. The one stipulation was that Alvarado relocate to Dallas and work for him.

Over the years, Alvarado worked his way up, learning everything about the restaurant business. Eventually he decided to try his hand at his own eatery. Not wanting to compete with his friend who owned the El Fenix chain, Alvarado moved to Oklahoma City and opened El Charro.

“That original restaurant was at Northwest 10th and Dewey,” Gonzalez said. “It was open for nine years before a fire destroyed the building. They relocated to what was then the new Paseo District.

“My uncle renamed the restaurant ‘El Charrito,’ which means ‘little cowboy’ in Spanish. In other words, El Charrito was the son of El Charro,” he laughs.

Other locations followed, and by 1967 Alvarado merged El Charrito into a chain of restaurants owned by his brothers-in-law.

“At that time, they had 30 units in Texas, while my uncle had only six in Oklahoma. Since it was easier to change the name of six restaurants rather than 30, El Charrito became ‘El Chico,’” Gonzalez said. “My uncle Louis continued to enjoy the partnership until his untimely death 10 years later in 1977.”

It was around that time when the family sold the chain to an investment company, which retained the El Chico name.

The eventual Milagros incarnation came about when Gonzalez’s father, Julian Gonzalez Sr., opened Pepe’s in Edmond, and Laredo’s in Oklahoma City, using many of the same recipes that had been handed down for generations.

“It was 1986 when my father opened Laredo’s,” Gonzalez said. “I joined the family business on April 19, 1995 – a date which is difficult to forget for us Oklahomans. At that time I worked for both Pepe’s and Laredo’s. We stayed open on Northwest 63rd Street until Chesapeake bought us in 2005.”

Construction began on the new building at 5111 North Classen a short time later, but the project was plagued with delays: a lawsuit was filed against the first contractor, and then a second contractor abandoned the project a few months before the building was finished.

Laredo’s finally reopened in September, 2009, and was immediately hit with a lawsuit.

“The building took so long to construct, and while we were closed the El Chico Corporation had opened a restaurant in Penn Square Mall called ‘Cantina Laredo.’ They did not like us using the name ‘Laredo,’ even though it had been our name for years.

“Our attorneys advised us it would be quicker and easier to change our name. We were given the date of December 24 as the last day we could use the name ‘Laredo’s.’ So early on Christmas morning, with over a foot of snow outside, our old sign came down and ‘Milagros’ went up. In Spanish, that means ‘House of the Miracles.’ We had been through so many trials and tribulations, challenges and more challenges, but in the end we are still here – intact. We considered it a sign from God that it was meant to be and for us to continue the decades-long family tradition of serving others.”

Also intact are many of the original family recipes dating all the way back to El Charro in 1937. The beans, rice and chili con carne are authentic, and the pecan pralines are made today by Gonzalez’s father in the same way his uncle taught him.

On our visit we were greeted by a hostess with a friendly smile and an enthusiastic “Welcome!” An unending supply of chips, fresh salsa and satisfying queso were promptly placed in front of us. We began with the tableside guacamole, which is made fresh by the expertly trained staff.

For our entrees, my companion enjoyed the enchiladas verdes – a twist on chicken enchiladas, but with a generous verde sauce. Spicy borracho beans, rice and a scoop of guacamole complemented his meal. I chose a Peruvian dish called lomo saltado. Milagro’s makes it their own way, with strips of fajita beef or chicken marinated in vinegar, soy sauce and a blend of spices. It’s stir-fried with fresh tomatoes, green peppers and red onions. I chose to enjoy mine fajita-style with piping hot flour tortillas.

The wait staff is attentive and courteous, making you feel like part of the family. And according to Gonzalez, you are.

“Milagros exists simply because of the belief planted in my heart and soul by my family. That belief is that it is an honor and a privilege to serve you. Our motivation comes from what we are able to do for our customers and our employees.

“Our goal is to satisfy our customers by offering great-tasting authentic Mexican food and do it with great service. We are proud to serve you in a clean, attractive and comfortable environment, and we want you to feel at home. We cook and prepare our food fresh every day with love and pride for what we do,” Gonzalez said. “‘Mi casa es tu casa.’ Yes, our home is indeed your home.”