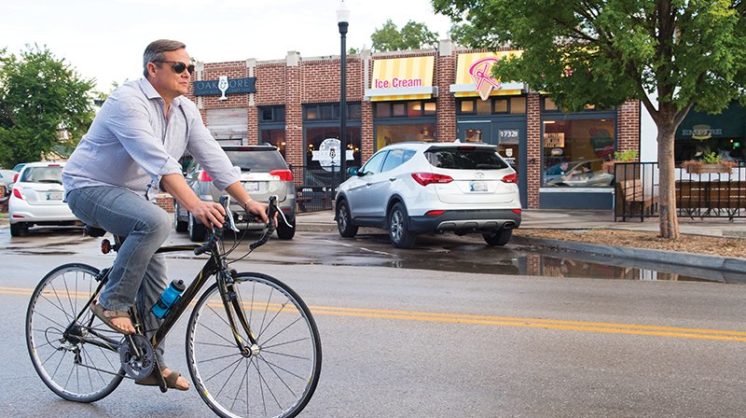 When Steve Mason wants to discover the true essence of a business district, and its potential for revitalization, he gets on his bike. At biking speed, Mason said, the true character of a district reveals itself.

Over a decade ago, Aimee Ahpeatone, then a volunteer with the Plaza District Association, persuaded her business partner to get on his bike and ride through the Plaza. Mason was skeptical: For years, people who lived in nearby neighborhoods purposely avoided the short trek to NW 16th – partly because there was little to see, partly because what could be seen was often illegal.

But with the relocation of Lyric Theatre to the district, Mason, a successful developer and a key figure in the rise of Automobile Alley, took Ahpeatone up on her challenge, and what he saw impressed him.

“The housing around the Plaza District is filled with people and families, and also to the south, which is the Classen-Ten-Penn area, you saw people improving their homes,” Mason says. “To the north, the homes are nicer so they’re more stable and taken care of, but if you rode through Classen-Ten-Penn, you saw people taking care of their homes, painting their homes. So you see people taking pride in their community, and that’s an important thing to see.”

Because he saw residents ready to be good stewards of the Plaza District, not to mention finding a logical layout of vintage buildings with decent structural integrity, Mason took the plunge. Today, the developer and president of Bluebird Consulting has renovated and revitalized 21 historic buildings in Automobile Alley and the Plaza District, dramatically shifting the fortunes of those formerly disused areas.

There are also plenty of bike rides in Mason’s future. The Wheeler District, Capitol Hill and other key areas are ripe for redevelopment as Oklahoma City, once on an intractable journey toward endless suburban sprawl, now puts more effort toward looking inward.

Successfully revitalized districts possess a few common traits, but above all else, most evoke a time when people walked more than they drove. They are, more often than not, the early to mid-20th century commerce centers that got left behind in favor of enclosed malls and Walmarts, but their structures were far more resilient than many of the businesses they previously housed.

“You’ve got to have that old, for lack of a better term, ‘main street area,’ where the old shops were,” says Mickey Clagg, president of the Midtown Renaissance Group, which rehabilitated dozens of properties in the area surrounding NW 10th between St. Anthony Hospital and OU Medical Center. “What people are looking for are small shops, not big boxes with big parking lots. So you need a human scale to it.”

Midtown’s neighbor, Automobile Alley, was home to Oklahoma City’s first car dealerships. Its layout and scale is so quintessentially “main street” that in 1996 the stretch of Broadway Avenue became a project of the National Main Street Center, a National Trust for Historic Preservation program that helps municipalities and entrepreneurs redevelop disused business districts.

But Midtown did not have a concise strip of buildings to define it: the district spreads out along north and south avenues in a broad, amorphous footprint.

“Midtown was a little more difficult, because you don’t have a logical Main Street like Broadway,” Clagg says. “We’ve got 10th Street and Robinson and Walker, Harvey and Hudson, but none of them were clearly our Main Street. It’s one of the largest character districts downtown, and so you have pockets of density. There was a lot of vacant property in Midtown when we started – and there still is – and so it’s a lot more difficult to figure it out.” 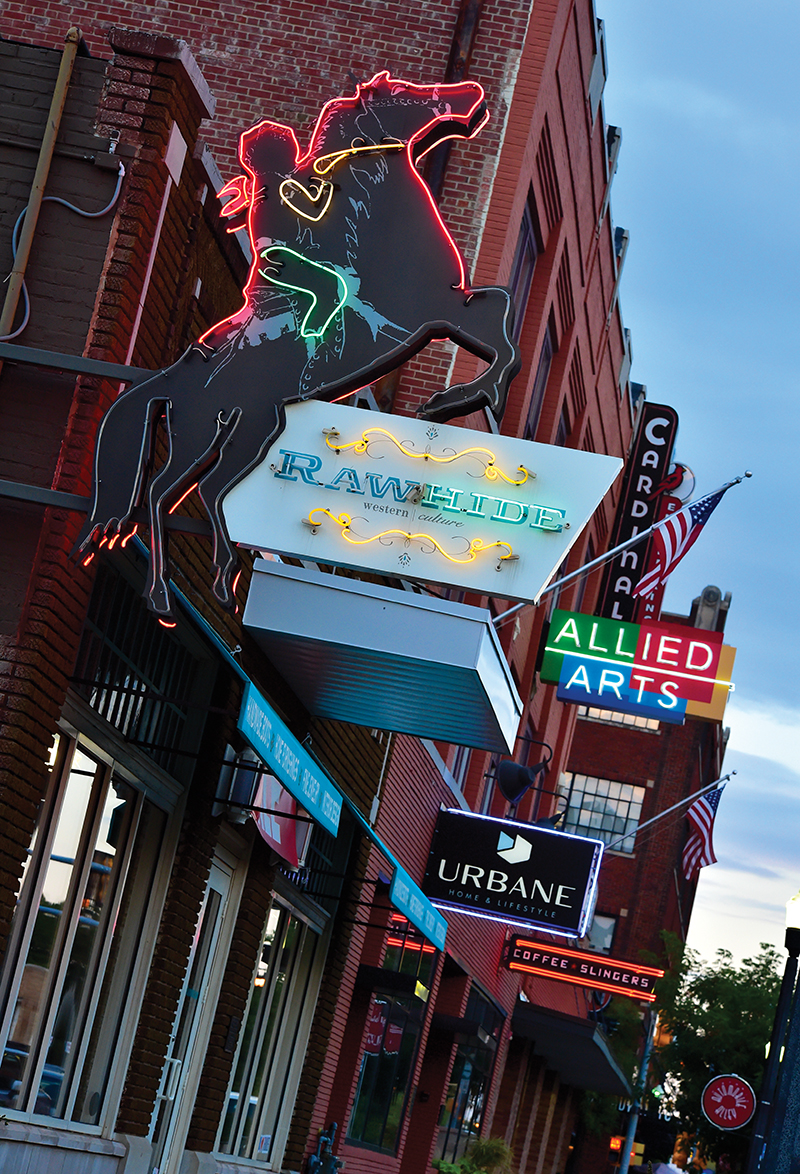 And yet, Midtown successfully branded itself as a premier entertainment district as the area filled with new shops, offices, nightspots and restaurants, new builds offered central residential options and the Ambassador Hotel’s O Bar delivered a signature view of the Oklahoma City skyline. The transformation came so dramatically that the area’s recent past life as a mostly vacant ghost district is only scarcely remembered.

But Midtown’s pattern of development points out the interdependence of districts on one another. Clagg’s development group owns two buildings that serve as bridges between Midtown and Automobile Alley: the Buick Building (home of Broadway 10 Bar and Chophouse) and the Marion Hotel. The 112-year-old Marion is the oldest commercial building in Oklahoma City, but stood empty for about three decades before Midtown Renaissance took on its renovation and also completed a nearby parking garage using tax increment financing, or TIF.

“The Marion was just a mess, but we did that just kind of as a historic project to preserve that hotel, which is a lot of people’s favorite building,” Clagg says. “The problem with a lot of these smaller projects is that they take up as much time and effort as the bigger projects, but you don’t make much money. But it’s part of the neighborhood – an integral part of the neighborhood – and it’s Oklahoma City’s oldest commercial building. For us, it just seemed criminal to abandon that one.”

Developers like Clagg and Mason take on business districts with a distinctly curatorial bent. A muffler shop situated next to an artisanal bakery does not make aesthetic or commercial sense, so to combat “fragmented ownership” they acquire as much property in the area as possible to maintain control over the district’s concept and execution.

Ward 6 Councilwoman Meg Salyer, who is president of Accel Financial Staffing Solutions on Automobile Alley, was one of the key drivers, along with architects Rand Elliott and Jim Bruza, of the district’s Main Street Program beginning in 1996. She describes the creation and management of a business district as being similar to running a shopping mall: strategic placement of businesses is key to spreading around foot traffic to all tenants. As she explained, malls do not place The Gap near any entrances – it’s always somewhere in the middle, forcing customers to pass at least half the stores in the mall before reaching their destination.

Salyer remembers what Automobile Alley was like in the mid-1990s, and one thing comes to mind: desks, desks, desks.

“There’s been a huge turnover,” Salyer says. “If you think about 25 years ago, the only thing down here was office furniture, remember? We had Lane’s on one side, we had Office Interiors, we had Desks Plus. It’s had a complete reinvention.” 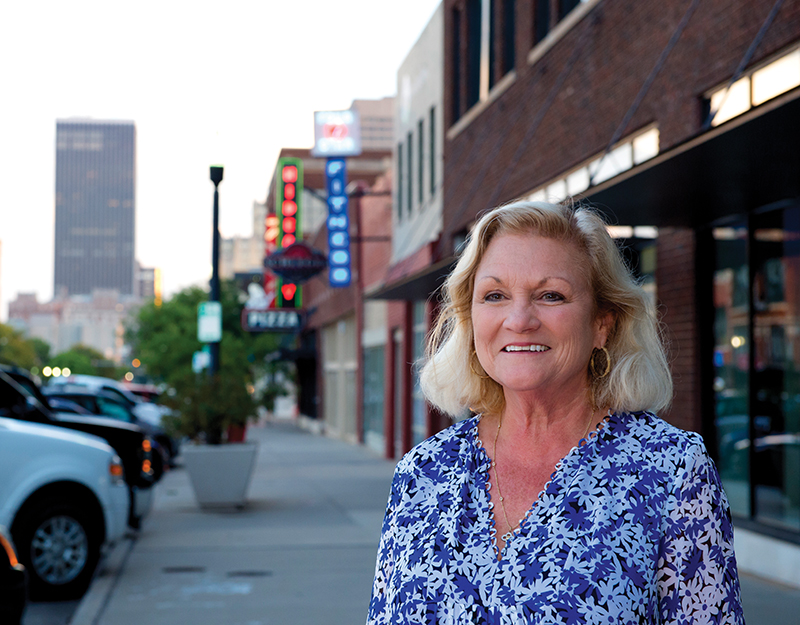 Shops and offices came first, followed by Coffee Slingers, Red PrimeSteak and a slew of new bars and eateries, including recent addition Cultivar. The revival of the Marion and the Buick Building created a smooth transition between Automobile Alley and Midtown.

At least in the downtown area, it’s possible now to walk seamlessly from district to district, moving from Deep Deuce to Bricktown to Automobile Alley and Midtown, then skipping south to Film Row and the Farmers Market, and venturing up Classen to the 21c Museum Hotel and Jones Assembly to see a proliferation of future commercial and residential building taking shape. Take Classen up to the Plaza or stay the course to Uptown 23rd, where the Tower Theater recently reopened after a lengthy hibernation and where restaurants and bars such as The Drake, Pizzeria Gusto, Back Door BBQ and The Pump Bar are thriving in a previously depressed district.

And then there are the future districts, places where Mason or other developers might be planning bicycle trips.

“I think the next obvious one is Capitol Hill,” Mason says. “It has the building stock and the people around it.”

Salyer agrees that the next big move will be in the southwest quadrant of Oklahoma City and will not be limited to Capitol Hill, a district which began redevelopment through a 1997 Main Street Project and is headed up by Calle Dos Cinco’s Donna Cervantes. Moves are now afoot to redevelop the SW 29th corridor, as well, and Salyer said she predicts there will be similar linkage on the south side to what has occurred in the downtown-centric districts.

“Capitol Hill is underway,” she says. “And whether or not you get a separate node on South Robinson, that could be an Automobile Alley-Midtown kind of thing, whether they blur together … there’s no doubt in my mind that South Robinson is going to be super-hot. There are just some great buildings that have great potential. There’s just so much opportunity, as there is in Capitol Hill.”

Success in Capitol Hill and South Robinson would spur further success in the Wheeler District on the Oklahoma River, and vice versa, Salyer said. How these developments move and what shape they take is yet to be determined, though.

“The big question is, should Capitol Hill be redeveloped by the existing Latino community or by outsiders like me? That’s really the sixty-four-dollar question,” Mason says. “I don’t know what will happen there. Both groups are thinking and talking and agonizing. A lot of the Plaza District redevelopment was by people who were already in that neighborhood, along with outsiders like me that brought in some capital and experience. So there is a partnership. Ideally, in Capitol Hill, the existing community will have a strong presence in the redevelopment, along with outsiders who bring some needed tools into the mix.” 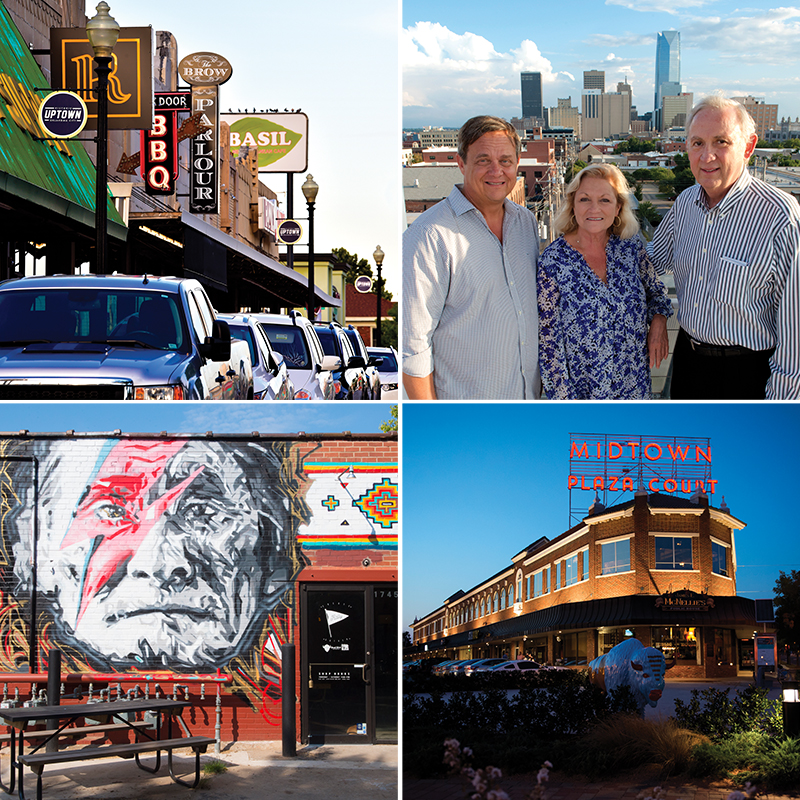 And then there are projects that will make enormous changes for their surrounding communities, such as the announced redevelopment of Northeast Plaza, the early 1960s shopping center at the corner of NE 36th and Kelly. Thanks to the Oklahoma City Council’s February approval of a $2 million TIF, development is underway on the project and is expected to be completed by late 2016.

There are also other districts that are not yet moving forward, yet cause an electric buzz of excitement among developers. One such area is Old Town of Britton, the former downtown of Britton, Oklahoma. Stretching about two blocks east from Western Avenue on Britton Road, Old Town of Britton looks a lot like many of the now-thriving Oklahoma City districts did before their facelifts: shuttered theater, down-market retail and a couple of bars.

Mention Old Town of Britton to Mason or Salyer, though, and they light up.

“I was talking to a friend of mine at the Power House in the Farmers Market two weeks ago who lives in The Village,” Mason says. “He said, ‘Gosh, I wish the Power House was in the Britton area.’ It’s going to take an investor that’s going to build what those people want.”

“I see it as perfect. I see it as absolutely right,” Salyer says. “It makes your heart pound. There is no reason that couldn’t be super-slick. But you have to think about what’s around it. Who’s going to drive it?”

Clagg said that whoever drives it will need to have some skin in the game. If Old Town of Britton becomes a thriving district serving The Village and Nichols Hills, it will happen because people are willing to work until they drop to make it come to life.

“The magic in the Plaza District was that those creative people slept in the back of their stores until they could make their businesses work,” Clagg says. “So, it’s got to be organic. It can’t be brought to you. And it’s going to take one big thing to start it, and I don’t know what that is.”