A Family Place for Everything - 405 Magazine 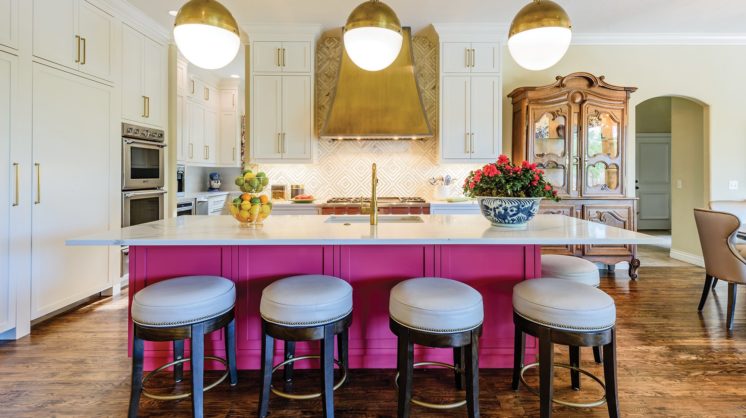 When Monique Naifeh commissioned her friend and decorator Bebe MacKellar to find a bigger kitchen table, MacKellar envisioned much more. “I thought we were just buying a new table,” Naifeh says, laughing. “She came in, looked and measured and said, ‘Why don’t you just add on?’”

MacKellar answered Naifeh’s request for more gathering space by blowing out kitchen walls and creating a new sitting area – a casual, inviting nook with tons of natural light. Monique and Justin Naifeh, along with children Jack, Caroline and Kate, love to host their extensive Lebanese family. A group of cousins is 20 people, easily. Adding more space was the ideal, albeit unexpected, solution.

“Bebe knows how people live, [asking clients] ‘How do you live in your house? What’s going to be convenient for you?’” Naifeh says.

“From the get-go, I was constantly trying to create better spaces for them to live as a family,” MacKellar says. “The beautiful part, I can always take care of that – but to get a house to function well, that really is one of my passions.”

The Naifeh family moved into their Nichols Hills home in 2010. Built in 2006, the property on Camden Way was move-in ready, bigger than their previous home and just what they needed with young children in tow. However, as they’ve lived and grown in this home throughout the past 10 years, the Naifehs have found ways to enhance the home’s beauty, function and flow. In 2014, they added the second living room. In 2017, they remodeled the kitchen. In 2018, they built a pool. Last year, the master bathroom got all the attention.

“It’s been a journey, but we’re happy with it. It’s livable,” Naifeh says. “It’s nice to have a place where you walk in and you feel calm, happy and relaxed. There’s a space for everything to fit and put stuff away. It just works.”

Life at the Naifeh home can be active. Caroline may be practicing pulls with her field hockey stick on the carpet, while Kate dribbles a basketball across the kitchen. Jack is probably cuddled up with Cosmo, their golden retriever, on the sofa (even though Cosmo isn’t supposed to be on the sofa). It’s likely Justin is sitting at the kitchen island, catching up with Monique as she cooks dinner. The open-concept kitchen and living areas encourage family interaction, while private bedrooms and bathrooms provide individual privacy when desired.

“It never looks perfect because people live here and make a mess, but I love that there’s enough space to do that,” Naifeh says.

In addition to making the family home more functional, each project has provided an opportunity to showcase the Naifehs’ personal style – classic with an eclectic, playful edge. The design mixes French antiques, crystal chandeliers and marble tile with textured wall papers, modern light fixtures, detailed patterns and punches of color.

The kitchen remodel started as a way to make the island more user-friendly. It ended with a reconfigured layout that has made everything more user-friendly. At the same time, they installed a stunning backsplash: AKDO Luminous Beam Calacatta honed marble with gold. Naifeh discovered the detailed marble-and-gold design at Young Brothers, and it was her must-have for the kitchen. When she found out it was beyond their budget, she selected a less expensive tile for the butler’s pantry to make it possible. The backsplash and kitchen island, painted in Cherry Wine by Benjamin Moore, are the stars of the kitchen.

“I’ve never been afraid of a little bit of color,” Naifeh says. “We were talking about doing blue. Then Bebe came in and said, ‘What do you think about pink? Everyone’s doing blue now. We should do something different.’”

The deep pink color was unusual – and it was perfect.

“I love to push my clients,” MacKellar says. “If you’re going to hire a decorator, a decorator should be the person who gives you confidence to try out some things that you wouldn’t do on your own, because you don’t know how they would really be executed.”

Most recently, Naifeh and MacKellar partnered to renovate the master bathroom and closets, including converting the unused formal living space at the front of the home into Monique’s closet. Before, the room was becoming a catch-all for belongings. No one really went in there, and it was too small for entertaining. They walled off the room’s original doorway and, in its place, added a beautiful entry niche with gold Weitzner Oracle wall covering contrasting against a dark gray painted background.

“Monique has a very warm spirit, and I thought the tactile feeling of the wall covering really brought in that warmth when you enter the home,” MacKellar says.

Another bonus: The piano that was located in the formal living room was moved to the middle of their communal space. With more prominent placement, the piano is getting played more now, bringing even more liveliness into the home.

“We spent so much time really ironing out the details so both Monique and Justin got the space they craved,” MacKellar says. “It’s such a nice retreat for them and their busy lives to have a pretty area.”

Strong friendship and client-designer trust helped create this home. Naifeh will lock onto a piece that inspires her – a piece of furniture or decorative finish – and MacKellar will run with it. It’s a partnership that has functioned as well as their home.

“We hire people who are good at their job, and then we try to stay out of their way so they can do their job,” Naifeh says. “I’ve said ‘no’ sometimes to Bebe, but she knows me pretty well. I have a lot of faith that she has good taste, and she knows my taste, and she’s going to get it right.”

Who knows where the next project will take them? Only time will tell.