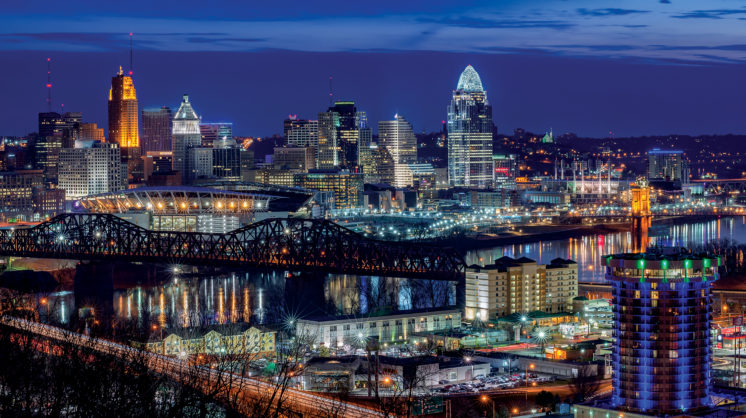 Greenville, South Carolina, and Cincinnati, Ohio, are about 400 miles apart, on opposite fringes of Appalachia. This is a tale of two cities bound, for me, by a single story – that of Shoeless Joe Jackson. And in following the historical thread, I found lots to love in both locations.

The name sounds like something out of a 1930s movie. There are 34 towns named Greenville in the United States; so many that this South Carolina city has adopted the tag line, “Yeah, THAT Greenville.”

Once a thriving center of America’s textile industry, the town, by the ’70s, was in a funk. Foresighted city movers weren’t content to watch the deterioration, and began a process that helped turn the town into what it is today: a vibrant, exciting and diverse community.

The diversity is immediately evident in the food scene, as an influx of international companies brought the world to Greenville’s front door. There are more than 120 restaurants in the downtown area; 98 percent are locally owned.

My first intimation of the quality of cuisine I’d experience here came at Ji-Roz, where chef/owner John Makkas pulled out the stops and emptied the kitchen on my table. This is Greek food at its best. John does everything (except the occasional cheese) from scratch, including making and hand-rolling phyllo dough for his 50-layer baklava.

In a fast few days, I ate Persian food at Pomegranate, Moroccan dishes at Lazy Goat, a beautiful butternut soup at Passerelle French Bistro and kouign-amann, a Breton cake described as “the fattiest pastry in all of Europe,” at Upcountry Provisions. I even squeezed in some American food. My best suggestion tackling this taste fest is taking a Chef’s Table Culinary History Tour. The walking will help counteract the eating, and you get a side of local history in the bargain.

Downtown Greenville is a joy to explore. Walking down tree-lined Main Street takes you past interesting shops, galleries and eateries, and street corners and small parks feature public art. Perhaps my favorite pieces are nine tiny mice inspired by the book Goodnight, Moon, hidden in plain sight along several blocks of Main. They make cool scavenger hunt targets for children and adults alike.

There are shops to pique any interest – from Magnolia Candles’ elegant wares (and you can make your own) to old-fashioned general store Mast, with a candy department which will practically put 10 pounds on anyone just walking through.

The pride and joy of the downtown area is Falls Park. Until the renaissance, many residents were unaware of the beautiful Reedy River. A highway went over it, as did a railroad bridge. It was overgrown and littered with industrial detritus and trash. After the highway bridge was removed, opening up the view, piers that once held railroad tracks now created interesting patterns in the falling waters tumbling over natural rocks. The area was turned into beautifully landscaped Falls Park, now a central attraction of the town. The Liberty Bridge for pedestrians is an architectural wonder – curved, it is held up by a single suspension cable. Another special feature of the park is Dale Chihuly’s “Rose Crystal Tower.”

The Swamp Rabbit Trail, a 21-mile biking/hiking path, runs through the park. I stayed at the nearby Swamp Rabbit Inn – a favorite with bikers. Bring your own bike or arrange to rent one with your reservations.

The Inn is also close to Fluor Field, home to the Greenville Drive, the A affiliate of the Boston Red Sox. Close to the field is the Shoeless Joe Jackson Museum, in the unassuming red brick home where he lived after “retiring” from baseball.

I planned to spend about 30 minutes there. I’m not a big baseball fan, but even I knew the name Shoeless Joe. What I didn’t know was the whole story. After two hours, I came away a big Jackson fan – sympathetic for his history, impressed with his record and indignant at his treatment. He was a beloved figure in Greenville, generous and humble.

One particular story – told by a woman who came into the museum and related it to the guide – touched my heart. She grew up in Greenville, where Jackson would often close his business if kids wanted to play ball. A game was in progress when a little girl came up and wanted to play. The boys were having none of it. But Shoeless Joe told them, “If she can’t play, I don’t play.” The visitor was that little girl, grown up.

The displays and graphics are very well done. One of the memorabilia-filled rooms is the bedroom where Joe Jackson died. He held no resentment over his banishment from baseball, but maintained his innocence until the day he died.

The Shoeless Joe museum is currently closed for renovation. I hope it reopens soon. The small house, like Joe, brought home his humanity as well as his amazing talent. Many towns have museums, but only Greenville has Shoeless Joe.

That had to be my favorite experience in Greenville, but there were many more treats, including the city’s other fine museums: the Greenville County Museum of Art; the Upcountry History Museum; the Children’s Museum of the Upstate and the Carolina Music Museum. The Shoeless Joe Jackson Museum is currently closed for renovation. Check before you go.

Add up all these attractions and throw in the nearby Blue Ridge Mountains, and you have a big-time destination with a small-town feel. I don’t know about the other 33 Greenvilles, but South Carolina’s really is the one people talk about. Yeah, THAT Greenville.

Cincinnati was once known as the “Queen of the West,” back when it was considered the farthest reach of civilization. Now its nickname is simply the Queen City – which beats another nickname it once had: “Porkopolis,” for its burgeoning meat packing industry. Today, Cincinnati attracts far more than pork processors or travelers who are on the way somewhere else. Tourists find Cincinnati a compelling destination for a plenitude of reasons.

Cincinnati has a cool downtown, with a blend of contemporary and historic buildings. I stayed in the heart of downtown – handy to lots of interesting attractions. In fact, right next door to my hotel is the Contemporary Art Center, founded in 1939 and one of the first institutions in the country dedicated to contemporary art.

An easy walk south from the hotel are the National Underground Railroad Freedom Center, a riverfront park, the Cincinnati Reds home ballpark, a giant Ferris wheel and the Roebling Suspension Bridge – which served as a prototype for engineer John A. Roebling’s later and more famous Brooklyn Bridge. Walkways on the sides of the bridge give pedestrians a great view of the Cincinnati skyline and the Ohio River, and entry to the state of Kentucky on the south side of the bridge.

If you’re traveling with kids – or are one yourself, you won’t want to miss the Newport Aquarium on the Kentucky side of the river. They have a tremendous collection of animals including, born this summer, a baby shark (doo doo doo, doo, do do). My favorite thing was the touch pool with scarlet skunk cleaner shrimp – tiny, colorful, little crustaceans who act as personal groomers for reef fish. They will nibble under your fingernails and around your cuticles.

One of the city’s biggest celebrities can be found north of downtown at the Cincinnati Zoo: Fiona, now two-and-a-half, was, at 29 pounds and six weeks premature, the smallest Nile hippo ever known to survive. She’s now well over 1,000 pounds – but still looks little next to her mother Bibi. She’s had a book written about her, has been deputized by the Cincinnati Police Department and is a favorite with children and grown-ups alike. 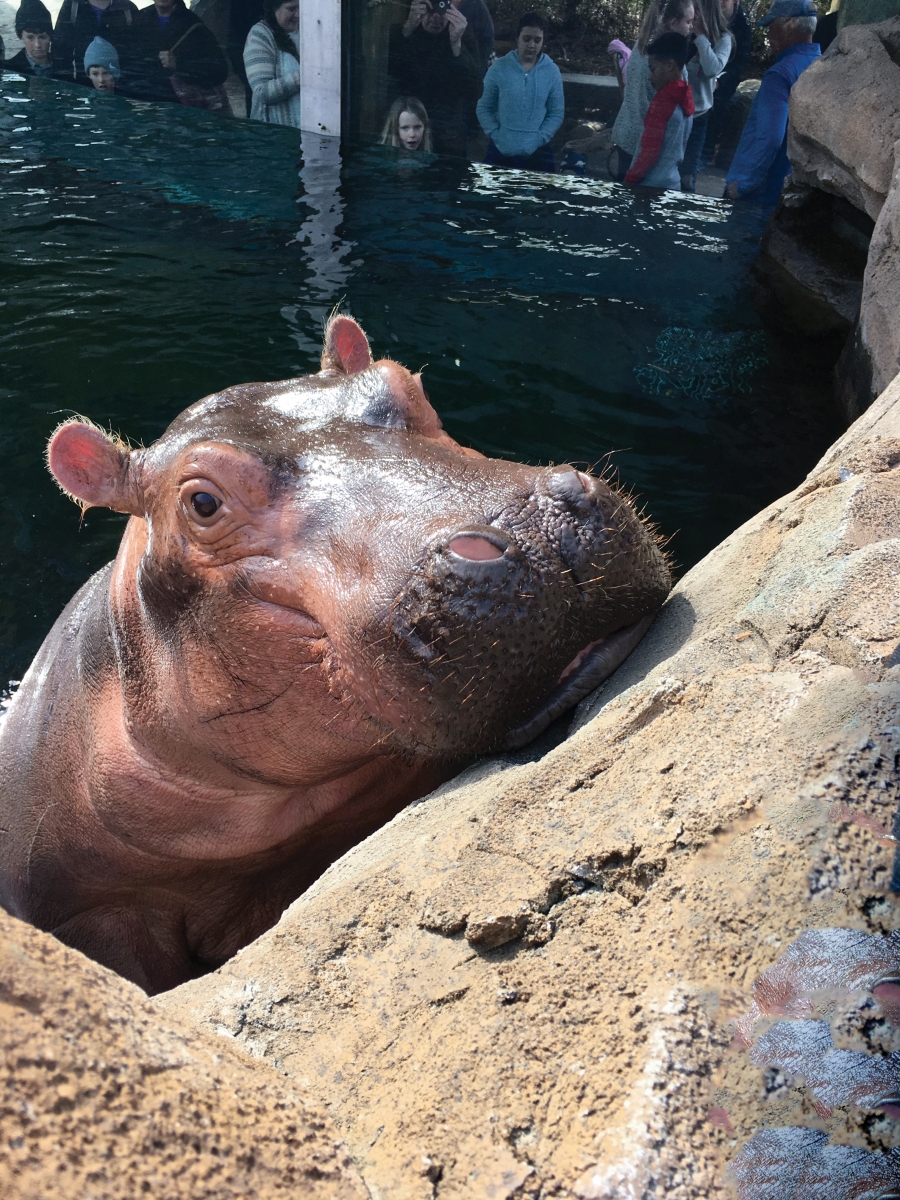 Another popular family destination is the Dinosaur Hall in the Museum of Natural History and Science in the Museum Center at Union Terminal. The Center also includes a history museum, children’s museum and an Omnimax theater, and a new exhibition area hosts featured exhibits, such as “Destination Moon: The Apollo 11 Mission,” which opens Sept. 28. Just seeing the Union Terminal is worth the trip here. The 1933 building is a masterpiece of the Art Deco style. If you’re into historic décor, ask to see the area with carved, lacquered linoleum murals created by French artist Pierre Bourdelle.

For something completely different, check out the Cincinnati Fire Museum. The city had the first paid professional fire department in the United States, established in 1853. Before that, there were groups of volunteers, but they competed with one another, often spending more time fighting each other than the fires. Lots of equipment is on display, but the fire pole is irresistible. Yes, I slid down it. Fortunately, there were cushions at the bottom; my “sweet skills” don’t include sliding down fire poles. Young children won’t get very much out of this museum – you can’t climb on the trucks – but older youngsters will enjoy it.

The fire company wasn’t the only Cincinnati first. The Reds have claimed quite a few: The 1869 Red Stockings were the first openly all-salaried professional team in baseball history, transforming baseball from a social-club pastime to a professional game. The Reds, who are turning 150 this year, also hosted the first night game, were the first team to fly to a game and participated in the first game to be televised (against the Dodgers at Ebbets Field in Brooklyn).

A tour of the stadium is interesting, but the best way to see it is to go to a game – and tour the Cincinnati Reds Hall of Fame and Museum. Look for tributes to Oklahoma’s own Johnny Bench everywhere. Exhibits are colorful and informative – and you can even make your own baseball card. A tour ends in the Championship Room. The Reds have won the World Series five times – 1919, 1940, 1975, 1976 and 1990. The first championship trophy was given in 1967. Replicas of the modern trophies have been created for the ’19 and ’40 wins.

And here’s where my Shoeless Joe Jackson connection comes in. Mounted on the 1919 trophy is the last ball hit in the infamous series – a ground ball by Shoeless Joe was the final out.

Following the tour of the stadium and Hall of Fame, our press group was met by a guide from American Legacy Tours to take us on a walking tour titled “1919: The Year That Changed Baseball.” Among the sites pointed out was the location of the hotel where the White Sox stayed, and where some of the players (not Jackson) met with a representative of the mob to set up the fix. The Reds stayed at the Metropole Hotel, one of Cincinnati’s finest accommodations. That 1912 building still stands, but its severe Neo-Classical Revival original exterior now includes two bright yellow penguins standing atop the corners of the marquee. The old classic is now an ultra-modern hotel – the 21c – where I was staying. What a way to end my story!