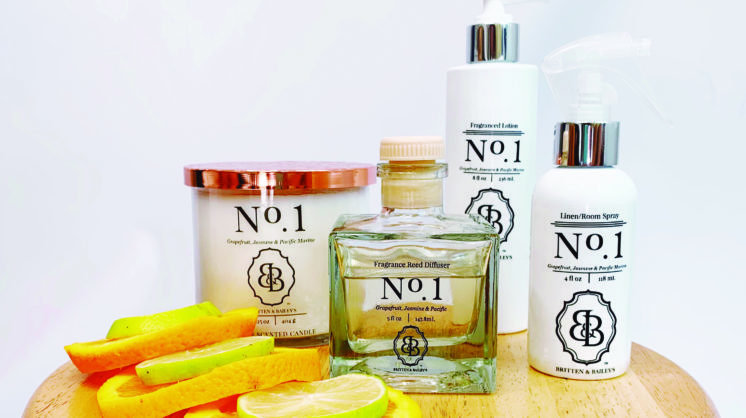 Processed with VSCO with au5 preset

Tiffany Webb is serious about candles. And fragrances. She was the candle buyer for Hobby Lobby stores for almost eight years and because of her foresight and keen decisions, that department’s sales grew by about 90 percent. Other large companies pursued her. She had other ideas.

Rather than move and uproot her family, she and her husband Heath decided to sell everything they own and start a business, Britten & Bailey’s candles and home fragrances based in Bethany. “We sold our house and moved into an apartment with two kids and launched the brand in October of 2018,” she said.

She created seven fragrances available in small tins with a plan to offer subscriptions, and the company does do that, but almost immediately she was approached by local boutiques for wholesale orders. Her decision? “Well, let’s do it. I can learn to do wholesale, I used to be a buyer.” Two months later she started wholesaling and sold out in one week. “I knew we were onto something.” 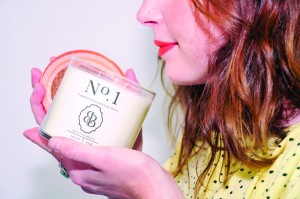 This spring, Neiman Marcus became interested. Webb had sent an email to a buyer suggesting the brand and quality would be a good fit for the stores. She was told not to expect to hear back for a month or so. Only a few hours had passed when she received a response and a request for samples. Webb is excited about the possibility.

Britten & Bailey’s products are different in many ways. First, they’re named with numbers. Webb started with fragrances No. 1 through No. 7 and a few months ago launched No. 8 through No. 12. Along with the small candle tins, the company has two-wick jar candles, natural lotions, linen/room sprays and diffusers.

The idea to use numbers as names came from her Hobby Lobby experience. She knew people couldn’t always remember the names of the candles they love. Most can recall a number. “It’s been really fun to see life experience translate into a new brand,” Webb said. Premium fragrance notes also help set her candles apart from others. Some lower-end fragrances have been known to trigger headaches for those with sensitivities. “Fragrance is the heart and soul of the candle,” she said. “I have high standards.”

That’s also why she uses coconut wax instead of the more typical soy and paraffin blend or palm and paraffin. Coconut wax is sustainable, consistent, and not as many additives are needed. It burns clean, is natural and fragrances work well it. “I’ve been able to make decisions for my brand that are best for the customer,” Webb said. 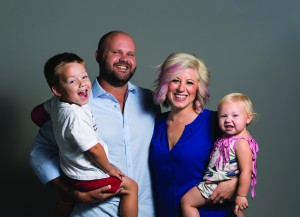 And customers are responding. All her fragrances sell well, and she loves each one she offers. The goal always was to introduce people to new fragrances and blends at an affordable price. No. 3, for instance, is peony, magnolia and plum. No. 9 is sea salt air, lavender and sandalwood.  Prices range from $15 to $30.

Diving into fragrances and developing them into her line is what she says drives her. “No one is looking at fragrance the way I do.”

While diffusers, other flameless options and room sprays are popular, Webb said she thinks there’s renewed interest in candles, especially more natural varieties. “I think people missed the ambiance of a burning candle.”

A candle scent can conjure up memories. “One lady picked up fragrance No. 6 and she almost started to cry. She said it smelled like her grandmother. It’s a memory trigger. I love that about fragrance,” she said.

Numbers 1 through 7 tend to be more herbaceous. Eight and 9 lean more toward masculine, while green citruses envelop 10 and 11. No. 12 was created with the Webbs in mind. Tobacco, vanilla and clove. Very spicy, sexy and masculine. “It makes me think of a leather study. Very warm,” she said.

Next up is a solid cologne using the brand’s fragrances. She wants to make sure the fragrance plays well with the formula and that the quality they want is there.

Husband Heath, the business arm of the company, has a put in a request, too. He would like a shave bar in the No. 12 fragrance. And maybe a shave foam and a natural deodorant.

The brand’s lineup has 41 products. Forty have scents and No. 0 is an odor eliminator that works on mold, pet smells and urine. 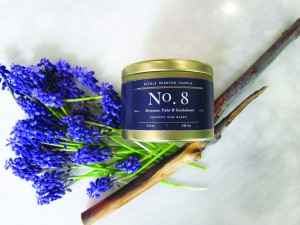 Britten & Bailey’s, named after two Beagles the couple got when first married, is now available in more than a dozen stores across Oklahoma, as well as locations in Louisiana, Texas, Kansas, South Carolina, Missouri and Indiana.

The subscription service planned from the beginning is popular, too. Customers have two options — one candle for $12.99 or two for $22.99 a month. Webb randomly chooses the fragrances so customers can experience the entire line. If someone wants the same candle each month or requests a specific scent, no problem.

“Subscription was the plan,” she said, and it’s working great. “But you’ve got to roll with the punches when you’re opening a business. You’ve got to listen to your customers and follow their lead.”

She did that by jumping early into the wholesale end of the business and then again by adjusting her subscription plan.

“That’s why we did the one candle a month … that suggestion came from a customer.”