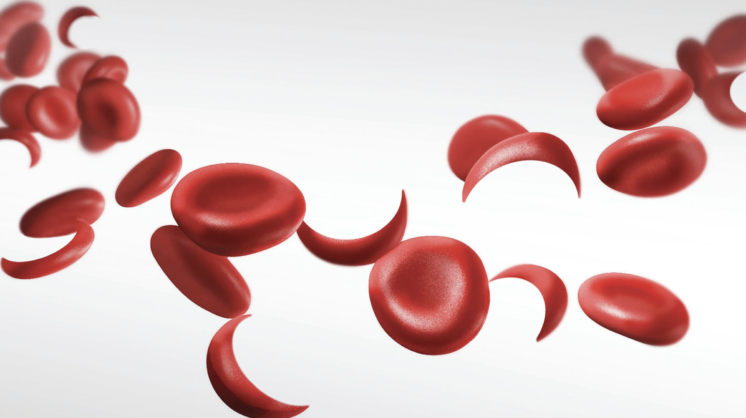 Sickle cell anemia is a painful disease. It plugs up blood vessels, starves organs of oxygen and causes episodes known as “pain crises” that send sufferers to the hospital.

Rodger McEver, M.D., treated many patients with sickle cell while training in Chicago and St. Louis, which have large African American populations that are most susceptible to the disease. 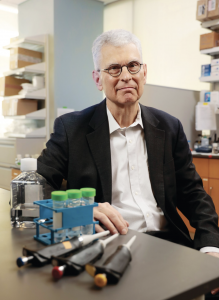 The pain can be disabling, he said. Sickle cell can cause strokes, kidney and lung afflictions, heart problems and organ failure.

So, when 200 patients involved in a clinical trial of a drug developed by McEver at the Oklahoma Medical Research Foundation reported a 45 percent reduction in pain crises, he was “absolutely thrilled” with the results.

“The way you alleviate human misery is to figure out how things work,” says McEver, a hematologist and vice president of research at OMRF. “That’s the important thing about research.”

In November, the drug – purchased from OMRF by Novartis and now known as Adakveo – received U.S. Food and Drug Administration approval. Other remedies treat sickle cell pain crises after they happen, but the once-a-month intravenous therapy created by McEver is designed to keep episodes at bay in the 100,000 Americans who have the disease.

“It’s extremely rewarding to see your own research developed into a drug that will eventually help a lot of people,” said McEver, an Oklahoma City native and John Marshall High School graduate. He joined OMRF in 1987 after graduating from Yale University and the University of Chicago and teaching at the University of Texas Health Science Center in San Antonio.

There was a time when children with sickle cell disease did not make it to adulthood. The prognosis is much better these days, thanks to early diagnosis and medical vigilance, said Arpan Sinha, M.D., a pediatric hematologist and visiting professor with the Jimmy Everest Center for Cancer and Blood Disorders in Children at The Children’s Hospital at OU Medicine.

All babies born in the United States are screened for sickle cell, though it’s most common in people of African descent. About one in 13 African-Americans are carriers, and one out of every 365 black children born in the U.S. have the disease, Sinha said.

About 200 sickle cell patients are currently being treated at The Children’s Hospital.

“Usually, our goal is for them to have their first visit with us before they turn 2 months of age,” Sinha says. “We start them on penicillin and teach the parents how to recognize some of the warning signs.”

Often the parents had no idea they were carriers. “They are very worried, because a baby’s birth is supposed to be a happy thing, and now they find out they have a chronic situation they will be dealing with the rest of their lives,” says Sinha.

Parents are educated about complications that can be life-threatening. The antibiotics help prevent certain bacterial infections the children are prone to because the disease affects the spleen.

“We hammer into them that if there is any fever, they have to bring their child to the hospital, even if they think it’s from a cold or they think it’s because the child is teething,” Sinha says. “We encourage being active, but obviously it’s hard for them to go into competitive sports. Swimming is a problem because cold water can bring on pain episodes.”

Sickle cell is a genetic mutation that causes red blood cells to change from their usual round or oval to a crescent shape.

“Hemoglobins are red blood cells,” McEver says. “Their main function is to carry oxygen. The mutation causes the hemoglobin to form chains. It stacks up, particularly where it is trying to deliver oxygen to tissues. This on and off blockage causes pain.” It also means patients are anemic because they have fewer red blood cells circulating.

Twenty-five years ago, McEver said, “people studying sickle cell disease began to think there was more to the pain crises than just the plugging up of these red blood cells.” McEver began working with P-selectin, a protein in blood platelets that makes white blood cells stick to blood vessels and platelets as an early response to injury. In sickle cell patients, the P-selection causes too many white blood cells to accumulate, creating inflammation and exacerbating the symptoms of the disease.

McEver developed an antibody that blocks the ability of P-selectin to recruit white blood cells and platelets. It was tested in clinics across the United States, Jamaica and Brazil.

Little did McEver know that one of his own co-workers would likely benefit. Mary Long has spent 34 years as a housekeeper at OMRF. She was 22 and pregnant with her first child when she was diagnosed with sickle cell, though the pain had been with her since childhood.

“My body would ache like it’s all the way to the core,” Long says.

She battled on and even played basketball and softball. But some days she couldn’t get out of bed. The doctor who diagnosed her told her to get plenty of rest and to cut back on sugar. Her daughter was born healthy, and she and her husband had two more children.

“I don’t dwell on it,” Long says. “I try to stay busy. Probably if I had dwelt on it, I probably would have passed on a long time ago.”

Hearing about the approval of a new pain medication “was one of the best days I’ve had in a long time,” says Long, who is 69. “I just hope my insurance will help pay for it.”

Long had confided in an OMRF receptionist about her sickle cell, and the co-worker mentioned it to the administration after the drug was approved. Long said it’s pretty amazing that a solution was found in the very building she works in.

Sickle cell, Sinha says, “is something that evolved over time in Africa. These mutations evolved because they provided increased immunity from malaria. Just having the sickle cell trait improved the survival rate from malaria.”

Sinha saw sickle cell while in medical school in her native India.

“They have a slightly different genotype,” she says.

Sickle cell will go away someday, McEver said, but for now he’s just excited about Adakveo.

“Until we can get a cure for the genetic abnormality, we can block the platelets from sticking where we don’t want them,” he says.

Most drug development is funded by taxpayers, McEver explained. “The National Institutes of Health, the vast majority of their budget is competitive grants to scientists across the country. It’s probably the best use of tax dollars in the federal government.”

The American Society of Hematology, a nonprofit that researches blood diseases, has expanded its sickle cell research.

“This has been an underserved group,” McEver says of people with sickle cell.

Sinha says, “I think it’s finally getting the attention it deserves.”