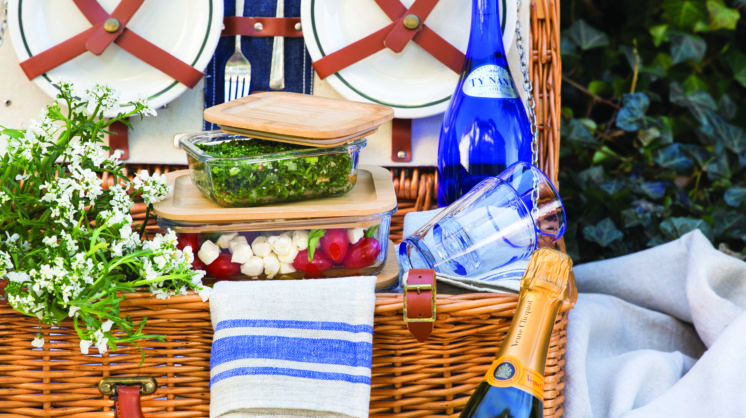 In prehistoric times, every meal was a picnic. Humans just ate outside most days, usually after vanquishing the main course, but as civilization progressed, people started eating indoors more frequently, which made the idea of al fresco dining more of a novelty.

While the French term pique-nique was in use since the late-1600s to describe relaxation after hunting, a ritual memorialized in François Lemoyne’s 1723 painting “Hunt Picnic,” most historians agree that the modern concept of a picnic began shortly after the French Revolution, when the newly enfranchised citizenry would lay out blankets and dine on formerly royal grounds.

The accoutrements of picnicking have not changed much in a couple of centuries. If a table is used, most people think of gingham cloths, sandwiches and bowls of fruit salad, all passed around in a bucolic setting. If it’s done reclining on the grass of a park, a sturdy blanket is spread to keep the dirt and bugs away and a sumptuous feast of cold fried chicken and sides is brought out from a woven basket and served with lemonade or, for picnic brunches, champagne. 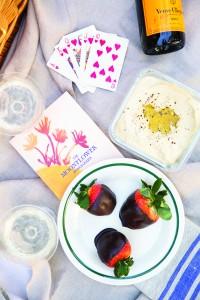 But recent evolutions in picnicking come down to two elements: developing palates and food science. The United States Department of Agriculture (USDA) established a “danger zone” for food between 40 and 140 degrees. If the food is supposed to be cold, it can be left at room temperature for two hours before returning it to the refrigerator, and no more than one hour if, like it often is in Oklahoma, the temperature rises above 90 degrees.

“In truth, this happens all the time, particularly with home cooks,” said Kamala Gamble, who operates the catering service Kam’s Kookery and serves fresh food grown at her suburban farm, Guilford Gardens. “It’s basically meat and dairy are the things. I think onions can eventually go bad and kill you and stuff like that, or there’s botulism from home canning, though I don’t know if it happens that much. Butter can have an effect, but if you go vegetarian, you’ll probably be using olive oil anyway.”

Oklahoma State University’s Food Demand Survey (FooDS), an online study that measured food trends from 2013 to 2018, found the number of self-identifying U.S. vegetarians rose four percent during the reporting period, from just under five percent to nearly nine percent. As such, food companies are responding to the demand increase by rolling out transitional vegetarian foods like Beyond Meat and Impossible Burgers — burger patties that mimic the taste and texture of ground beef. As more people choose vegetable-based diets, concerns over food safety are diminishing in some areas, although USDA still recommends food safety measures to ward off viruses and contaminations such as staphylococcus aureus, salmonella enteritidis, escherichia coli O157:H7 (E-coli) and campylobacter. 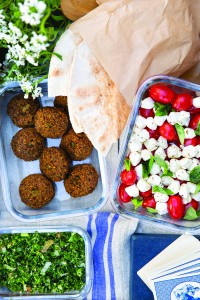 Gamble recommends roasted or grilled vegetables, including indigenous Oklahoma vegetables like okra, summer squashes, green onions, tomatoes, corn and grilled potatoes for a spring or early summer picnic. In addition, there are elements of the vegetable-rich Mediterranean diet. One of Gamble’s outdoor dining staples is the panzanella salad, an easy-to-make Tuscan dish.

“The panzanella salad, which is one of my favorites, has the tomatoes, the cucumber, the feta, basil and all that good stuff, and you just keep the feta in the cooler and serve that at the last minute and you’re good to go,” Gamble said.

A panzanella salad also includes toasted bread (the pan in panzanella), red onion and bell peppers. Those with a taste for them can include capers, and the salad can be prepared either sauteed or baked. Fresh mozzarella can be used in lieu of feta and a packaged medium texture or homemade tofu can be substituted for vegan diets.

Corn is also a mainstay for picnics, and a lot of people love to throw corn on the grill and get some good roasting on the kernels before serving. However, corn really does not have to be cooked to enjoy.

“I eat corn just right off the cob,” Gamble said. “When the corn starts coming into the farmers market, I just pull it back and eat it.”

For those who cannot imagine a picnic without cold chicken, Gamble said the best preparations are either fried or smoked, then cooled before serving at room temperature. In addition, potato salad and coleslaw were favorites for outdoor dining for years, but then people started becoming wary of egg-rich mayonnaise. Eggs do not do well outside of controlled environments, but Gamble said picnickers just need to be smart in order to be safe.

“You make it and put it in a cooler,” Gamble said. “Those are your mayonnaise-related dishes.”

For picnic enthusiasts who still love a good coleslaw, there are the oil and vinegar versions, but if creamy is still desired, there are products such as vegenaise that are remarkably close in taste to traditional mayonnaise but contain no eggs. One of the dominant brands of vegenaise is made by Follow Your Heart, which began marketing its vegenaise over 40 years ago. Ingredients include safflower oil, brown rice syrup, pea protein and apple cider vinegar, but prepare to be fooled — the resulting vegenaise is almost indistinguishable in taste, color and texture. It could be a picnic saver for people who get scared around traditional preparations of coleslaw and potato salad.

If something more spicy is preferred, guacamole and salsa served with chips can fill the bill nicely. Guacamole is best made with medium-to-ripe avocados with lime juice, garlic, onions and tomatoes, and cilantro can be included for those born with the gene to like it. Many people worry understandably about guacamole turning brown when it is exposed to oxygen and have turned to remedies like leaving avocado pits in the dip or increasing the amount of lime juice used. However, Real Simple magazine did some tests last year to find the best way to keep guacamole attractively verdant, and the pits and lime juice produced little change. However, if guacamole is covered in a half-inch of water that is poured out before serving, the guacamole can stay green up to two days.

But do not forget watermelon for an Oklahoma picnic, which is available locally via the large number of watermelon growers in Rush Springs.

“We did some stuff with 612 and Commonwealth Urban Farms, people who we admire and respect,” Gamble said. “I did a big ol’ platter of watermelon salad with feta and basil. Everyone will relate to panzanella salad and watermelon at a picnic.”