A Q&A On Birdwatching with Local Photographer - 405 Magazine 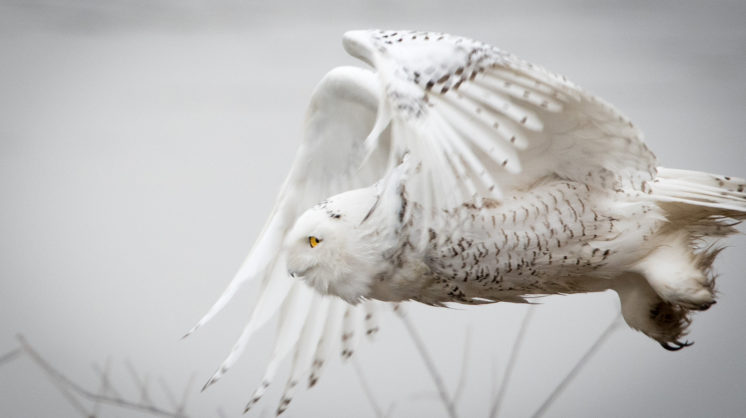 I was halfway through my lunch one December Saturday in 2017 when I heard on the news that a snowy owl had been spotted just off a runway at Will Rogers Airport. Sandwich abandoned, within minutes I was in my car and headed south on the Hefner Parkway, trying to figure out how to finagle my way onto airport property to see this rare arctic visitor. I’d photo- graphed many species of birds passing through Oklahoma’s central flyway, but this was definitely not one of them. A snowy owl hadn’t been spotted in Oklahoma in years— so to a lifelong bird photographer, this was the opportunity of a lifetime. 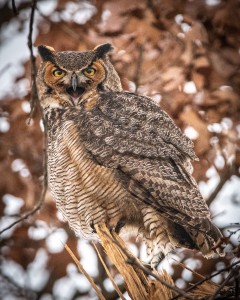 Growing up, each spring my father and I would head out to local lakes to look for colorful migrant warblers. The trails around Lake Hefner came alive with the mostly yellow migrants, and with minimal effort, we could find the famed painted buntings and a variety of tanagers and orioles in the oaks around Lake Arcadia. By winter, the same lakes were covered in ducks looking for unfrozen water. Snowy owls, however, rarely made it farther south than Minnesota, so finding one would typically require first buying a plane ticket.

Through a Facebook birding group, I learned that the owl had more recently been spotted at Lake Overholser. While the task of a finding a small white raptor at a giant lake was daunting, it was less daunting than trying to breach the runway at Will Rogers—so instead, I made my way to Route 66 and the three-day search began. At first, when looking for a single bird, you think every seagull and every plastic bag might be the visitor you’re looking for. As the day went on, though, the likelihood of spotting the bird seemed less and less.

On day three, ready to surrender, I walked across the dam to my car when I passed a gentleman with tell-tale binoculars. I asked if he’d seen the owl, then gave him my number and said, “Call me if you do.” Three minutes later, my phone rang.

Running with a giant camera and tele- photo lens on a frigid cold day is brutal, and getting to the spot where the owl was before it flew off required a sprint. But I made it: There was the owl and it was majestic. Terrified it would fly off, I pulled out my camera and fired as many photos as I could. As quick as I’d arrived, off the owl flew, disappearing into the lake’s wintry gray.

The moment happened so fast that I barely paid attention. And while my photos were good, I felt empty.

On the way home, I dropped by Lake Arcadia for a sunset photo. As I reviewed the image, I noticed something white contrasted against the shore’s rust-colored rocks. It couldn’t be … I zoomed in and couldn’t believe my eyes. More than 30 miles away, on the same day, there was another snowy owl. Time stopped as I watched the mystical bird. I went to swap lenses, hoping for a better image, but then I paused and put the camera down.

As birders, we seek moments like these, but in that moment, it felt that nature had sought me and I wanted to be present for it.

Learn from esteemed nature photographer and Oklahoma native, Matt Payne, about one of his favorite pastimes.

Q: How did you get into bird photography?

A: Birdwatching was a part of most activities I did with my father as a child. You could birdwatch while fishing, golfing, etc. It added an extra layer of fun to look for bald eagles or migrating warblers while fly fishing in Broken Bow. When I moved back to OKC in 2015,
my wife and I moved onto a farm. It was the middle of spring migration, so there would be painted buntings on the bird feeders and yellow warblers in trees. I had a Nikon P900 with a huge built-in zoom, so I just started trying to capture images of these birds because they were so beautiful. Quickly it became an obsession.

Q: Why do you consider this a desirable hobby?

A: Photographing birds is very meditative for me. I like to find a spot where I know a particular species might be and wait for it to arrive. I not only try to capture the bird for its appearance, but also I like to try to capture behavior: Cedar waxwings eating berries or tanagers chasing wasps. I enjoy going to a local pond or lake, finding a heron, and leaving my camera on the bird until it flies. That’s where you get the really cool shots.

Q: Do you take birdwatching scouting trips or do you let them come to you?

A: Both. I love the search the most, though. It is cool to find a block of oaks and listen for painted buntings first. Then locate them and finally snap a photo. Same for woodpeckers. They have such distinct calls and habitats. Finding them is like finding a treasure and is quite rewarding. You feel like you’ve done something cool. That said, feeders are fun. Particularly when you get a bird you’re not used to on the feeder. I’m always thrilled in the winter when I find nuthatches.

A: Every spring, I set out to find painted buntings.

Q: Are there any shots/birds left on your bucket list?

A: I’ve yet to see a barn owl and I’ve heard but never seen a screech owl.

Q: What tips do you have, and what equipment would you recommend, for people looking to get into bird photography?

A: Telephoto lenses are very expensive, but Nikon makes a point-and-shoot called a P1000 and the zoom is insane. If you want to take photos of birds, this is the best camera to start with, unless you want to get into spending a lot of money.