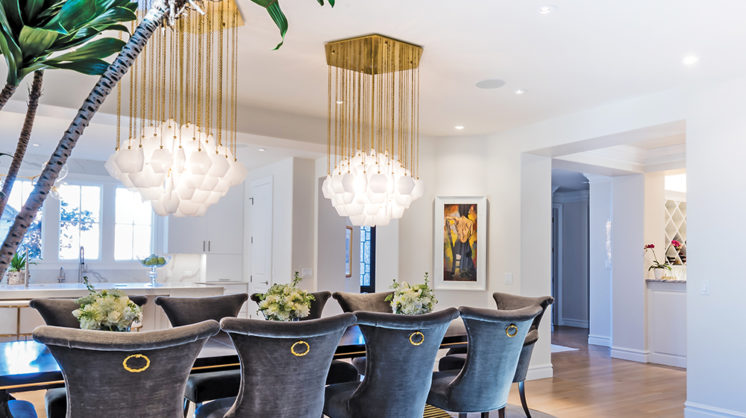 Denver Meacham bought his home a little more than a decade ago, and when he and his wife Patricia Edwards decided to marry, ending a four-year-long-distance relationship, they began to search for a new place to live. “I had lived in Dallas for 25 years,” Edwards says. “Two couples, mutual friends of ours, introduced us. I was in Oklahoma City a lot at that time taking care of my mother, who was ill.”

For some 18 months, the pair looked for a home to share. Meacham’s house was perfectly located in Grand Circle, in Nichols Hills, and the size was about right, too … but the floorplan was less open than the couple, especially Edwards, wanted. “We wanted to be able to have Denny’s whole family, which means about 25 people, over and for everyone to feel comfortable,” Edwards says.

The couple ultimately decided to stay in Meacham’s Grand Circle home, but to radically alter its floorplan and interior design. “Denny told me to do whatever I wanted to the house, which was a sweet thing to do – but I think although he didn’t say so, he had a certain amount of fear. I wanted to make sure he really loved it at the reveal, and I’m happy to say that he did, and does.”

Builder Kent Hoffman moved the couple into a rental for the duration of the five-month project, and interior designer Jennifer Welch went to work. “Patricia and I had so much fun working on this project. She is a design sophisticate, which meant there was no learning curve for her. She intuitively understands why the proportion of a chandelier matters. We were truly in sync,” Welch says.

The magnitude of the project is impressive. Load-bearing walls were moved, an outdoor space was brought inside and three living areas became one. “When the walls were removed, a pole was initially left in the living space, for structural support. Patricia looked at that pole and knew it could not be there,” Welch says. “She was told moving it was impossible. At that moment, everything ground to a halt. The architect said moving it was impossible. We said, ‘It can’t be.’ Long story short, the pole is now in the ceiling, and Patricia was absolutely right!”

At the reveal party, Meacham was incredibly proud, and a little bit shocked, at the dramatic change. “To me, the fact that Denny let Patricia do whatever it took to make this house her home, is an incredibly sweet love story,” Welch says. 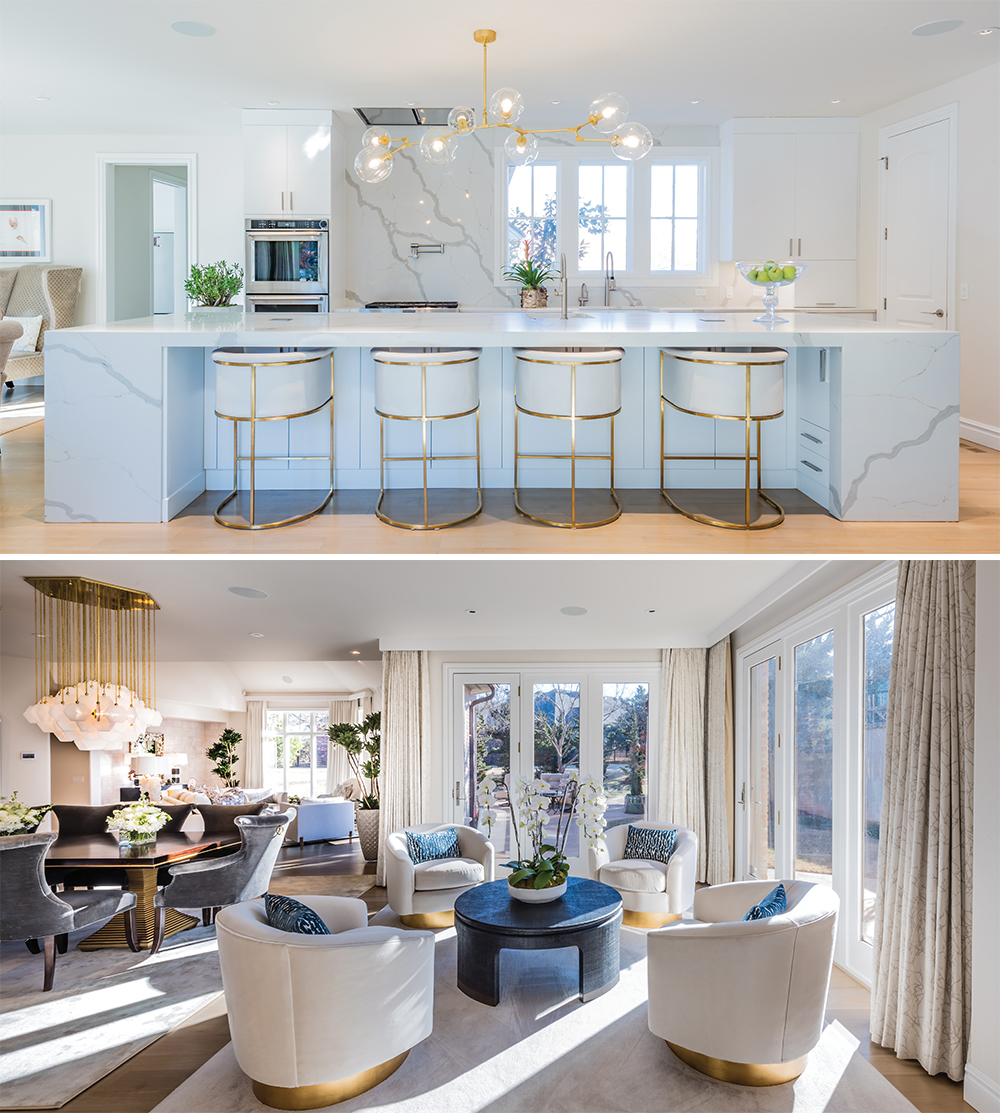 Once a patio, this seating area has the feeling of a club or lounge, and is perfect for cocktails. Edwards chose a lower table height intentionally, to avoid visually competing with the dining table nearby. The club table is covered in lacquered grass cloth for a sophisticated textural addition.

This massive kitchen island is as functional as it is beautiful. It houses the refrigerator and dishwasher, and large storage drawers and cabinets are discreet – their point of access is under the island, so guests in the adjacent dining space have a prettier view. The stone “waterfalls” at the edges, giving the illusion that it’s one huge chunk of stone. The wall behind the island is Calcutta quartz. “Patricia was not interested in traditional pendant lighting in the kitchen. She intuitively understood that this space needed something special,” Welch says. 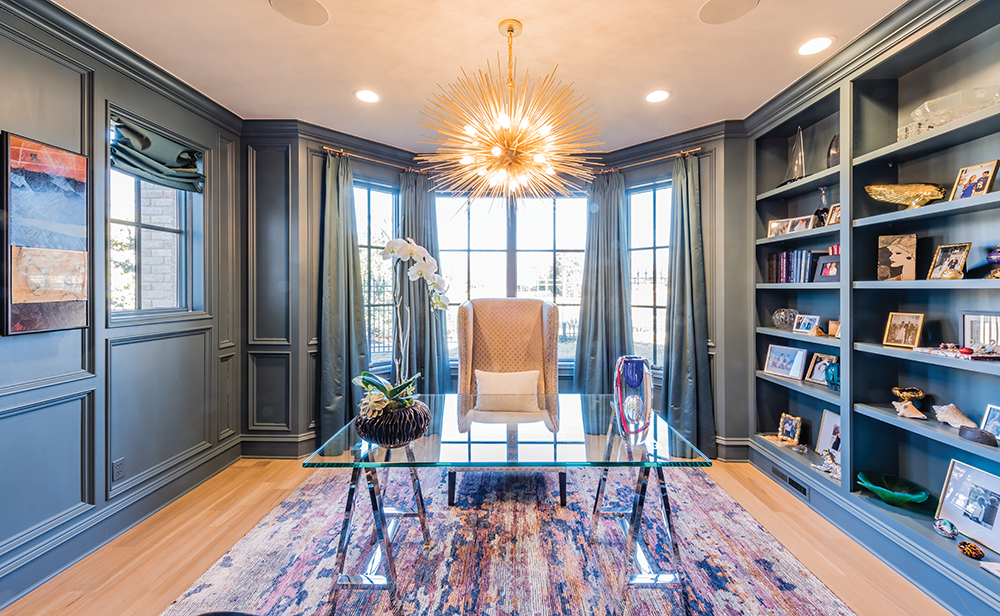 Edwards’ office is bold and simple. Walls and drapes are monochromatic, with custom paint created to match the silk fabric. A Kelly Wearstler chandelier adds drama overhead. There is a secret door in the room’s paneling that leads to Edwards’ dressing room. The couple sets up “exercise stations” throughout their home, turning the whole space into a gym. 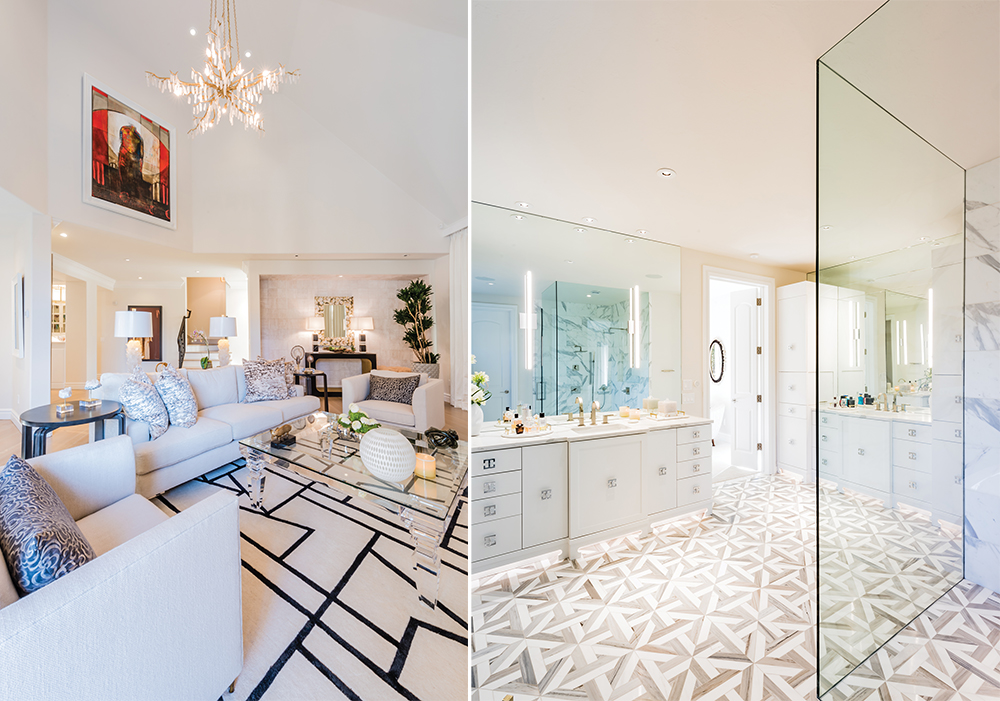 In the formal living room, all of the furniture is Edwards’ own from her Dallas home. Here, fabrics take center stage. Fortuny pillows, Holly Hunt upholstery, Shine chairs and sexy silk chenille make this room a tactile wonderland. Calcutta Gold marble surrounds the fireplace and perfectly complements a custom-stained wood floor. In the niche, ingenious lacquered burlap by Elitis covers the walls.

If this home had a mantra, it might simply be “clean and bright.” In the master bath, two extra feet of space was added. A striking floor tile was admittedly a splurge, but well worth it. The floor is heated, and a zero-entry shower allows the beautiful geometry to continue uninterrupted. Custom cabinetry has a clever feature: Soft, motion-activated lights are strategically placed underneath its lowest edge, so nighttime visits to the loo are gently illuminated.