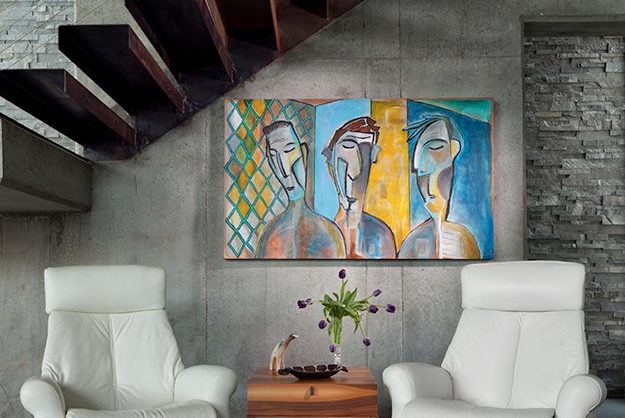 Interesting Architecture Occupies The Land
Along And Around Lake Hiwassee.

Late 1940s bungalows mingle with tidy ranches and traditional two-stories, all nestled near the picturesque man-made lake. Winding around the waterfront and past the mostly low-slung living quarters, you eventually come to the lakeside retreat of Rob and Patti Lewis. With a vision of escape in mind, the Lewises sourced structural and design components from around the world to craft a contemporary gem. “We both like modern,” says Patti, a partner with the law firm of Barnes & Lewis, LLP. “We worked to have something sleek and cool with an element of warmth,” she explains,
“so this is a combination of our vision.”

And the Lewis residence is a vision to behold. As one of the newest members of the neighborhood,
it represents a quantum leap in terms of local residential construction. This is no ordinary home, literally starting from the ground up. Instead of traditional wood-frame construction, the home’s walls are constructed of poured concrete panels with a core of insulation. While that sounds simple enough, the process created some unique challenges for the construction teams.

The cantilevered patio roof mimics the property’s gradual descent from street level to waterfront. Retaining walls around the patio provide plenty of casual seating options, and landscape flora minimizes the visual impact of mechanical systems. “We kept as many trees as possible,” says architect Bobby Newman.

“Anything that needed to be inside the concrete – conduit for electrical wiring, audiovisual, data ports, ductwork – had to be in place before the concrete was poured,” explains architect Bobby Newman of Oklahoma City’s 3 Level Design. The innovative approach earned 3 Level Design the Project of the Year – Above-Grade Concrete Home Award from the Concrete Foundations Association of North America.

Huge windows, nearly floor-to-ceiling, provide views of the entire shoreline from the living room space. The two-pane set on the right-hand wall was a late change to the plan, presenting the design team with some challenges. “Concrete doesn’t like to be skinny,” Newman said of the thin corner column separating the banks of windows. “We found a way to make it work, and I can’t imagine not having those windows there now.”

The choice of concrete walls helped meet the owners’ goals of creating a peaceful sanctuary. “There are no windows on the street side of the house,” says Newman. “There’s a reason for that.” The main landscaping feature in the front of the house plays on the tranquility theme. A solid red concrete ball sits in the center of concentric rings of stone, creating a ripple effect on solid ground. The outermost ring laps up near the pathway to the front door. Although the result is an arid sea of serenity, achieving the desired end was a challenge.

“The delivery truck couldn’t get [the concrete ball] where it needed to be because of the limited access,” Rob laughs. “So we had to figure out how to get it from there to here,” he continues, pointing to a spot about 20 feet from the sphere’s final resting spot. As befitting Mr. Lewis’s nature as an entrepreneur, they found a way to get the job done.

Viewed from street level, the house obscures the view of the lake. Once inside, the interior provides panoramic views of the water while completely obscuring any view of the street. The stone panels and custom cut glass accents help soften the concrete exterior walls.
Each ensuing “ripple” in the landscape increases by 30 percent in size as they move away from the center.

“We had a lot of meetings,” adds Bobby.

Walking from the street-level parking area, a pathway descends gradually toward the entryway. A small footbridge spans the walkway to the threshold. “That outside-to-inside transition is a symbolic cue that we are entering a different place,” Rob explains. A “moat” of smooth Mexican beach stone dotted with holey limestone boulders quarried from Kansas creates a break between the façade and the landscaping. A thin onyx panel, positioned on a wall to the right of the entry door, serves as the porch light when backlit at night. The various materials’ points of origin are just the start of a lesson in geography – and geology.

Artwork and artistic installations soften the concrete walls inside
the home. The steel panels forming a near circle separate the entry landing from the main floor. The feature focuses your attention on the lake view straight ahead without the claustrophobic drawback of a traditional wall.

When the front door opens, the transition from the street is complete – huge banks of floor-to-ceiling windows frame the lake. “We wanted the entire shoreline to be visible [from the great room],” says Rob. Immediately to the left, two steel panels rise out of a concrete bed to create a break in the space. The artistic feature was a latecomer to the plans. “We couldn’t decide if we wanted to put a planter or a water feature there,” says Rob. The steel panels, weighing in around 1,700 pounds each, represented another challenge. “We had to figure out how to get them in here after the house was built,” Rob continues.

The U-shaped bar gives everyone a view of the lake. The blocks supporting the bar are actually bricks of pink Himalayan salt cut and shipped from Pakistan. LED backlighting creates an inviting glow and shows off the beauty of the natural crystal. The glass-enclosed office above serves as a fourth bedroom for guests, and white acoustic panels hang from the ceiling to minimize noise bouncing around the large open space.

“That was another meeting,” Bobby jokes.

Functionality merges with style as you step down into the main floor. The Lewises envisioned a home where they could entertain parties of 30 or more comfortably, and the interior design is unified to meet that goal. The open kitchen includes a long island space to allow the hosts to prepare and serve food without abandoning guests. A large, U-shaped bar and abundant living room seating provides a place for everyone to meet and mingle or just gaze at the lake.

The enclosed patio room is tucked away behind the house where guests can be served conveniently from the indoor or outdoor kitchen. The barbeque features two separate grills. “You can’t cook fish and meat on the same grill at the same time,” Rob points out. “The temperature requirements are too different.” The second cooking surface is also useful when hosting large gatherings.

The backyard beckons with plenty of patio space and breezy waterfront resting spots.

Like the architecture around it, the Lewis’s Hiwassee hideout is a study in contrasts.

Large, open spaces encased in glass, steel and stone invite cozy conversations and nights by the fire. The vacation house is close to home with materials sourced from around the world and is a structure simple in appearance but complex in nature. “It started out simpler,” says Bobby.

“Then I got involved,” laughs Patti.

Ensconced in a bamboo nest, the master suite features louvered overhead vents for directional air flow. Six geothermal wells control the internal climate. Vents positioned in the floor and ceiling function together to keep air from stagnating. Bathroom cabinetry is made of recycled rubber tree wood. The lush appearance of the exotic lumber
is also waterproof, making it the perfect material for the purpose.

“We just wanted something for ourselves,” muses Rob, “and you hope it turns out.”

Bobby agrees, albeit from his perspective as architect. “In construction, you get one shot and you hope it’s right.”

Inside, outside, lakeside or street side – this project turned out all right. 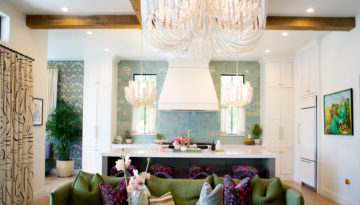 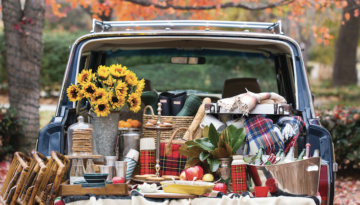