A Savory Soup to See Winter Off - 405 Magazine 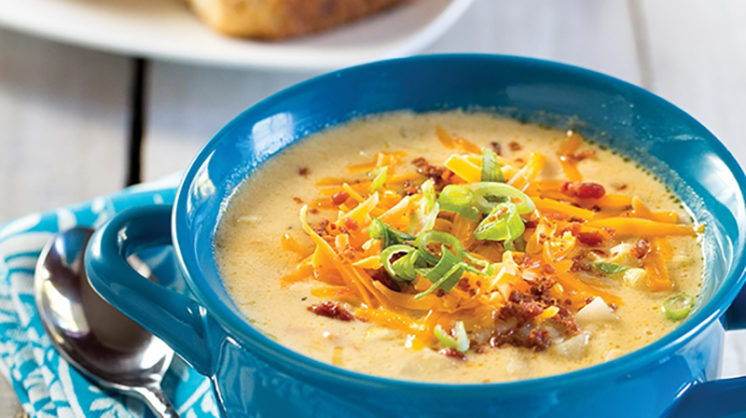 Spring Is Almost Here. The birds are back to singing their hopeful, happy tunes. Crocuses and daffodils are beginning to peek out. The thought of more days outside rather than in warms my soul. With all of that said, let’s face reality: it’s still chilly.

What better way to enjoy a nippy evening than with a hearty bowl of soup that comes together in less than 30 minutes? No fuss, no mess. This particular soup is perfect to serve to a crowd – double or even triple this recipe, then make a “fixings” buffet with assorted shredded cheese, chopped green onions, crumbled bacon or small ham cubes for guests to customize their helpings.

My “cheater biscuits” (so called due to using an all-purpose baking mix) are another crowd-pleaser that’s really the simplest thing on the planet to make. Feel free to experiment with this recipe. I have used ginger ale, club soda and even a Coke once when I made them with cinnamon sugar. The combinations are endless, and they turn out perfect every time.

1 can cream of chicken soup

1 pint half and half

► In a stockpot, sauté onion and celery in butter over medium heat. Cook until onion is translucent and celery is tender. Add leek, hash browns, cream of chicken soup, half-and-half, whole milk and cheese. Heat gently until warm. Serve and garnish with suggested toppings.

► Preheat oven to 400 degrees. Place a stick of butter in the bottom of a pie pan and melt it in the oven. In a medium sized bowl, combine the biscuit mix, sour cream and soda until it comes together. Stir in the bacon and cheese. This dough will be sticky. Put the biscuit dough on a well-floured board and knead gently until it is no longer sticky. Form the biscuit dough into a rectangle and cut into 9 squares. Remove the warm pie dish with melted butter and place the biscuits in the pan, filling it. Bake for 20 minutes or until golden brown.