A Tale of Two Performances - 405 Magazine 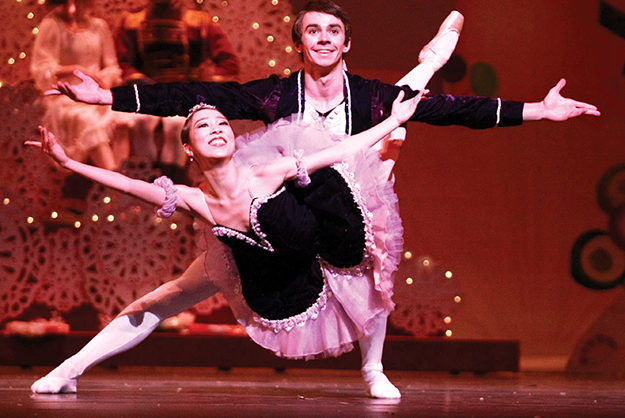 Visions of sugar plums, dancing snowflakes, evil mice, exotic characters and gifts from around the world leap to life in Oklahoma City Ballet’s “The Nutcracker,” set to Pyotr Ilyich Tchaikovsky’s enduring score performed by the Oklahoma City Philharmonic. In this annual holiday tradition, the Oklahoma City Ballet masterfully preserves E. T. A. Hoffmann’s story, written in 1816 and later adapted in 1892 with ballet choreography by Marius Petipa and Lev Ivanov. Join young Clara as she takes a magical journey with her favorite Christmas toy, the Nutcracker, which comes alive to defeat the evil Mouse King in battle before whisking her away to fantastic faraway kingdoms.

“Our version of the Nutcracker evolves each year,” explains Robert Mills, the ballet’s artistic director. “Often the changes are subtle, such as updating costumes, which we have done. More apparently, however, we have a larger company this year, so we have added more dancers to the production, which makes for a fuller, more exciting performance. For the true fans of ballet, it is always exciting to see a new dancer interpret a new role in a performance, which the Nutcracker always offers opportunities for us to do.”

This year, Oklahoma City Ballet’s principal dancer, Miki Kawamura, shares the role of the Sugar Plum Fairy with company member DaYoung Jung, who has also performed the roles of Clara and a dancing doll, as well as the sensual Arabian Dance. The 2013 holiday season marks Kawamura’s fourth year performing the Sugar Plum Fairy in Oklahoma City. “Sugar Plum is most technically challenging,” Kawamura says. “The role requires tremendous stamina and a lot of subtle foot movements.”

Yui Sato, Oklahoma City Ballet’s other principal dancer, performs the role of Cavalier this year. Sato, who has also been featured in the Arabian and Spanish Dances in past productions, has been continuously concentrating on strengthening his upper body in preparation for the spectacular lifts. “I especially enjoy the solo variation of Cavalier,” Sato says. “It is a great opportunity for me to challenge and prove myself in the pure classical technique of the piece.”

Sato shares the Cavalier role with Alvin Tovstogray, a company member from the Ukraine, who explains that the Nutcracker is a much bigger tradition in the United States than in the Ukraine. “I believe since The Nutcracker is such a strong tradition here that audiences have huge expectations,” Tovstogray says. “Many people have seen the show numerous times performed by various companies, so I feel like I owe the audience my best performance every time I come on stage.”

The central role of the young Clara is shared by two company members, Amanda Herd-Popejoy and Callye Crespo, both with extensive experience performing the part. “I love to embody a child and express the innocent joy of Christmas time,” Herd-Popejoy says. “I think audiences relate to the role even more now that her character is performed by a professional dancer rather than a child or student.”

Many ballet companies commonly cast professional dancers in the role of Clara. So Oklahoma City Ballet’s decision to elevate the performance level of the role in recent years is not surprising, particularly as the company grows in both the number of dancers in the company and also their technical abilities. “It is a challenge to balance the innocent, whimsical nature of a child while maintaining a high technical level in the performance,” Crespo says. “But as I perform the role now as an adult, I can return mentally to when I was Clara’s age and I performed the role as a student here at the ballet school, which helps me retrieve and convey that sense of excitement I felt.”

Crespo is one of hundreds of dancers trained at Oklahoma City Ballet’s school that have regularly appeared over the years in the ballet’s productions such as The Nutcracker. In a bold and unprecedented initiative for the school, the Oklahoma City Ballet recently formalized a partnership between its school and American Ballet Theatre, America’s National Ballet Company, to become the sixth certified school in the country to offer the ABT National Training Curriculum. The first three years of the collaboration have been underwritten by Oklahoma City native and ABT trustee Christian Keesee. “It is an incredible milestone that will help solidify our company as a regional force,” says Shane Jewell, the ballet’s Executive Director.

Oklahoma City Ballet school students will participate annually in examinations demonstrating that they have attained ABT’s high standard of training in ballet, which will be helpful to students pursuing a professional career in dance or applying to colleges. Jane Vorburger, School Director for The Dance Center of Oklahoma City Ballet, says the ABT training will allow Oklahoma City dancers a unique opportunity to be seen outside of this region by teachers from around the world.

Around a hundred students from the Oklahoma City Ballet’s school are participating in this year’s Nutcracker. As Oklahoma City Ballet’s school incorporates the ABT training, Mills says he is excited about the potential to continue to build the ballet’s professional company by hiring highly skilled students that have trained in the school and performed as students with the company. “When I am standing backstage and I see 10 little angels standing in the wings watching the Sugar Plum Fairy perform, I want the training we offer at the ballet to prepare those students to have the ability to perhaps one day join the company and perform that role. That’s the kind of continuity I want to offer at the ballet.”

In addition to incorporating ABT training into its school, the Oklahoma City Ballet recently accepted an invitation from the Colorado Springs Philharmonic to perform its version of The Nutcracker in Colorado during the upcoming 2014 season.

The Hip Hop Nutcracker offers both subtle and also dramatic variations to the classical tale. While the traditional story follows Clara on her fantastic voyage to exotic kingdoms around the world, this new interpretation of the Nutcracker, conceived by Race artistic director Hui Cha Poos is more rooted in reality. The Hip Hop Nutcracker follows Carlos, a young man who seeks to find a missing piece of his life. After Carlos receives a Nutcracker as a gift, like Clara, he also embarks on a magical journey. However, in this version, instead of battling a Mouse King, Carlos’s Nutcracker battles Ninja Mice, defeating them with an army of dancing robots. As Carlos weaves his way through the Land of Possibilities, he discovers the endless opportunities and potential life has to offer. In the Land of Hidden Treasures, he meets members of his family who reveal to him the greatest Christmas gift of all.

“I wanted to do a classic show but with a twist to showcase a style of dance that Oklahomans are not accustomed to seeing on stage,” Poos says. “Oklahoma has a huge hip hop culture, and I wanted to use this as an opportunity to showcase some of the variety and talent we have to offer. Since the only time we had free was winter, it was a natural fit. I wrote the synopsis and everything else fell into place.”

RACE, an acronym representing “Radical Application of Creative Energy,” is Oklahoma’s first professional jazz/hip hop/contemporary company. Since its founding in 2008, this non-profit organization has produced and participated in over 50 performances throughout the city. In 2010, the company was selected as one of the “Oklahoma Gazette’s” top 5 performance companies in Oklahoma. In 2011, they received the Great Inspirations Award from Creative Oklahoma.

“Race’s mission is to bring about social awareness and change through dance performances and dance education,” Poos says. “I felt it was important to involve local kids in schools who are not likely to be a part of a production like this and use it as an opportunity to mentor them. What ended up happening was more powerful and important than any of us could have imagined.  Communities were brought together, students learned to hold themselves and each other accountable and dance programs are thriving. We hope to be a staple in bringing these communities together for generations to come and continue to improve and expand on this idea.”