A Toast to New Hotspots - 405 Magazine 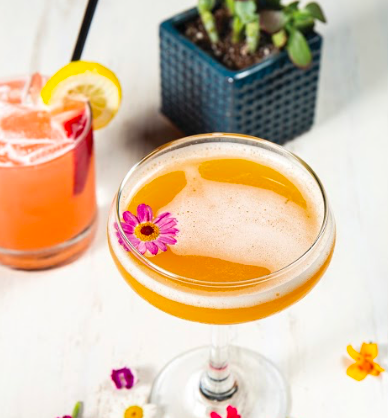 The development of Oklahoma City’s bar culture has historically been tied to restaurants and hotels. Much of that is no doubt due to the late date at which this state (or at least most of our counties) legalized liquor by the drink. Private clubs dominated, as did restaurants with “membership lists” that allowed guests to drink on the premises.

With the boom in OKC’s development in the 2000s and 2010s, the focus – driven by young, savvy entrepreneurs, industry veterans and creative bartenders – changed to a bar for bar’s sake mentality. Yes, Oklahomans will likely always ask, “Do they serve food?” That’s the culture we grew up in. But just as the COVID-19 shutdown was starting, three new bars that show great promise for OKC’s growth as a booze city were ready to open.  In May, they finally did. 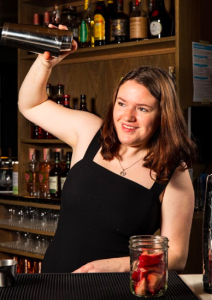 1884 at the Railyard (23 W 1st, Edmond) is a bi-level cocktail bar with a cigar lounge on the mezzanine. The cocktail program was developed by Emily Brake, who has since moved on, and features complex, whiskey-forward cocktails that showcase bourbon and rye, as well as what Brake described as “the underappreciated and undiscovered.” With a bit more than 60 bottles, the wine list is likely to be a draw as well, especially given that it’s a mixture of tried-and-true favorites and more discovery-focused wines such as Godello, Dry Furmint and Tibouren.

“The ethos of Community Through Beer (the parent company) has always been to create common spaces for shared experience,” Brake says. “Just as with their other concepts, Patriarch and Social Capital, it’s a very non-pretentious, ‘take you as you are’ vibe.”

As wine lists go, The Study, a new wine bar at 701 W Sheridan in Film Row, has the best delivery system in the state. Called “Cruvinet,” the system allows bars to sell wine with zero loss, so glass prices can shrink and selection can grow. Certified sommelier Ian Bennett and his partners have put together a “wine pub,” as he calls it, with quiet nooks, sunny corners and a beautiful bar that highlights the brass and glass of the 64-bottle Cruvinet system.

Bennett’s background in restaurants and wine sales has given him a broad perspective on people’s tastes, so the selection will range from high-profile, affordable brands that everyone will recognize to high-end Burgundies that will bring the Francophiles piling in. He even brought in Barefoot, a value brand stocked in liquor and grocery stores all over the country.

“I want anyone who comes in to feel that there is a wine they’ll like,” Bennett says.

Palo Santo – at 1203 SW 2nd in the Farmer’s Market district – had officially opened when the shutdown order happened. Owner-operators Brian and Bailey Butler moved to Oklahoma City from California to open a bar, and some of that California-casual approach is obvious in the layout: bright colors, dark bar area, plenty of plants, lounge furniture, a pool table and “elevated L.A. street food,” as Brian Butler describes it. But the place is sneaky beautiful, too, and the cocktails are stellar.

The Butlers were able to attract premium talent behind the bar, including Chris Barrett of Clockwork Pour fame; his turns behind the bar include Ludivine and The Hutch, among others. The whole team is creative, smart and cocktail-focused, and the food pairs beautifully with the classic and classic-with-a-twist cocktails. The bar program is an exciting blend of popular, quality spirits and some forward-thinking selections that will make Palo Santo a barometer for where OKC is headed cocktail-wise.