A Trial by Fire of Made-in-OK Salsas - 405 Magazine 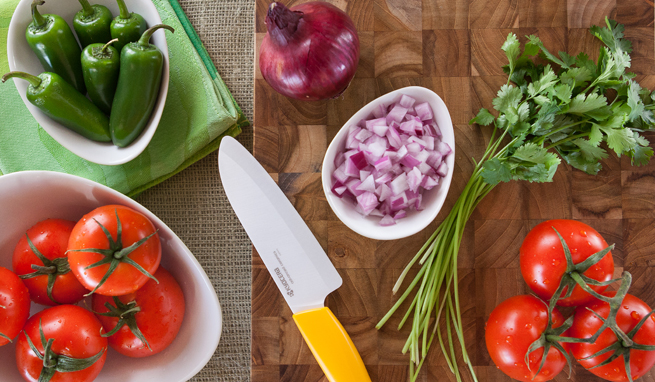 Homemade Salsas Bulging With Garden-Fresh Flavors Are Fabulous. We Decided To Honor July’s Bounty With Another Elemental Force The Month Officially Brings – Heat. In This Case, The Culinary Kind.

Feel Free To Brashly Double-Dip From The Checkerboard Spread Of Oklahoma-Made Salsas Out There: Bowlfuls Of Retail Selections Abound Across The State.

Keeping it simple, we found one local outlet – Forward Foods of Norman and OKC – that carries three local brands. The tomato-based dips in Mason-style jars included ingredients such as cilantro, lime juice, “special spices” and one with mysterious comino. (We looked it up. It’s Spanish for cumin.)
One thing we learned from labels: “Hot” is relative. All three used the word, except for one “extra hot,” which wasn’t actually the hottest.

No. 1 El Rancho Extra Hot Salsa.  This metro-made delight was second hottest, but flavor mostest. Its essence was even, with onion and garlic notes. Texture was on the pureed side, with a nice hint of chili-powder-like savoriness.

No. 2 A&J Hot Salsa, from Ninnekah. It tied with No. 1 for its medium chunkiness, but ay ay ay – muy caliente. Habanero and ghost peppers imparted their spirits for that. We broke the glass on our emergency kit of milk and bread to quench the fire. With all that heat, it was hard to pick out the strongest flavors. The best we could manage was, “It tastes red!”

No. 3 Cocina San Pasqual Home-Style Hot Salsa, from Perkins. A great find for those who love tomato flavors. Relatively mild, it’s a safer pick for the less-masochistic eater. Keep your taste buds on alert for roasted green chilies and garlic.

With only two Okie hot sauces available, we bent the eligibility rules to get a third – the brilliantly conceived Flaming Lips Hot Sauce with label artwork by singer Wayne Coyne and Lips artist/director George Salisbury. But the stuff is made by Big Daddy’s in Houston, Texas. Houston, Texas? Git a rope.

We narrowed down Pepper Creek Farms’ three flame throwers to what we considered the best, then it was on with thermal testing.

No. 1 Flaming Lips Hot Sauce. You know how some people look for a hot sauce with that just-right combination of flavors and spiciness? This is one of them. Check out the deliberately kooky ingredients designed to capture the band’s vibe: pineapple, orange juice, apple cider, St. Arnold Lawnmower Beer and habanero peppers. It screams for anything with fish or chicken.

No. 2 Pepper Creek Farms Serrano Hot Sauce. Takes off with a sweet apple-cider zip, then zings with serrano sizzle. It earns its billing as Pepper Creek’s hottest. Perfect for a few drops of tanginess or a dash in a sauce.

No. 3 Suan’s Scotch Bonnet Flavor Sauce. The battle for second and third was nearly a tie. All three hot sauces were so good that one taster converted from a hot-sauce agnostic to a come-to-Jesus believer. Suan’s combines sultry heat, scotch-bonnet jelly sweetness and a touch of sweet onion. Great as a sauce foundation or direct to your favorite eats.