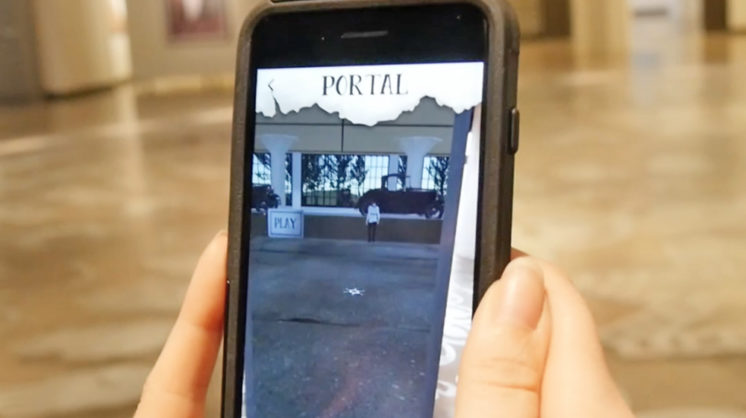 One local business is offering a history exhibition with a difference – bringing Oklahoma’s past to life before your very eyes.

Folk Secrets is a mixed-reality treasure hunt combining a TV-style adventure series on Facebook with an Augmented Reality mobile app. When history hunters aim their device at certain signs, statues or objects throughout the metro, a virtual doorway will appear, allowing the user to step back in time.

The history puzzle is the brainchild of Oklahoma City-based company Trifecta Communications, which released its latest series earlier this month during the deadCenter Film Festival at the 21c Museum Hotel, 900 W Main. It’s set to run until July 21.

“Imagine standing inside the 21c Museum Hotel, activating a virtual doorway with the app, physically walking through the doorway and entering the exact spot 80 years earlier,” says Trifecta Communications’ CEO Brent Wheelbarger. “You would see a Ford automobile factory and have an opportunity to explore a virtual 360-degree experience by moving your phone in all directions.”

Wheelbarger said the idea came to him after helping his daughter study for a middle school history test, a subject which she called “boring.”

“I had to agree that studying endless multiple choice, fill-in-the-blank questions was pretty boring.  It got me thinking, ‘How could we make learning history more engaging?’ At the same time, we were watching this treasure hunting show on the History Channel,” he says.

Combining the two, he created Folk Secrets, which is now in its third season. The first two were released in Cleveland County, where the company was originally based, but the latest season is exclusive to the company’s new Oklahoma City home at 28 NE 28th, with a grand finale planned at the Oklahoma State Capitol on July 21. That’s when the final clue to the treasure hunt – yes, there’s a treasure hunt involved – will be revealed.

Anyone interested can join in every Saturday morning on Facebook or FolkSecrets.com, where treasure hunters can find out which area to visit that week to find the clues. Cash prizes are available for successful hunters.