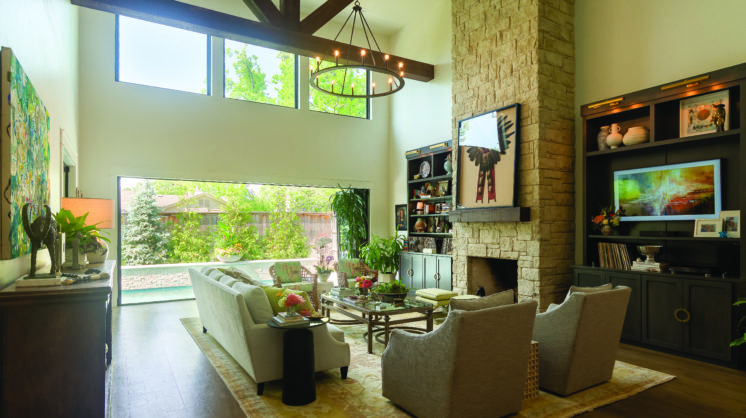 Large glass doors, opening up to the pool, extend the open-concept aesthetic of the home even farther. Photo by Christina Waters.

Surrounded by familiar faces, the Hiersches have the friendliest of homes.

“Tilda” — that is, the Arteriors Tilda chandelier in the dining room — is a piece Smith knows well. After all, she helped the Hiersches choose it, along with other interior design decisions. Today, the fixture is a favorite purchase. It’s artsy, yet approachable, just like the rest of the Nichols Hills home.

“We made compromises here and there, so things like ‘Tilda’ could happen,” Smith said. “I love how Christina knew where every penny was going. They splurged on their lighting and wood floors, but not their kids’ rooms since those will probably change.”

Almost every aspect of the Hiersches’ newly constructed home has a friend behind it. Mike Anderson sold them the lot. Architect Isaac Hines drew up the plans. Jason Gudell was their builder and contractor. That combination made for a great start.

“He helped us figure out what we should do in this great room for a kind of centerpiece fireplace,” Justin Hiersche said. The Winfield Kansas limestone, which reaches up to the 20-foot-high ceiling, was just the right choice.

When it came to making interior design decisions, Christina Hiersche recruited talented neighbors whose homes she admired. Most recently, interior designer Anna Covington has introduced furniture, rugs and accents that complement the Hiersches’ colorful collection of local and Southwest art.

During construction, Smith — a previous neighbor in Belle Isle — helped select lighting, countertops, hardware, paint colors and wallpaper. The storytelling Poem d’Amour Folk print in the powder bath is another highlight in the home.

“I knew I could trust Kimberly so much because she was a friend,” Christina Hiersche said. “It’s one thing to have a beautiful home, but you have to live in it, too. I just thought she made great choices.”

The back wall of the living room has floor-to-ceiling glass doors that open up to the backyard pool, a concept the Heirsches saw and loved while living in San Diego.

“I liked the idea of water around our house and the sound of water fountains, so I knew that these [doors] were a non-negotiable item, something we just had to have,” Justin Hiersche said. “People think you live in Oklahoma and you can’t use them because it’s 100 degrees in the summer and 35 in the winter, but you don’t realize how often you can use these doors. I open them a lot of mornings and evenings.”

“We’ll sit in the [living room] chairs and open those doors on a Friday night and — while the kids are upstairs playing — we’ll sit and have a cocktail,” Christina Hiersche added. “It’s really nice.”

To maximize space for the open-concept living room and kitchen, the Hiersches decided on a floorplan with a smaller primary suite. Accommodating togetherness took priority.

The kitchen features two large islands, one for cooking and one for dining — a unique and practical idea presented by Hines, their friend and architect. Eight wicker barstools surrounding the island seat a steady rotation of friends and family. For the Heirsches, sharing their beautiful home with others is a dream come true.

“Sometimes I can’t believe we live here,” said Christina Hiersche. “We are crazy happy, and working with so many friends made it fun.”