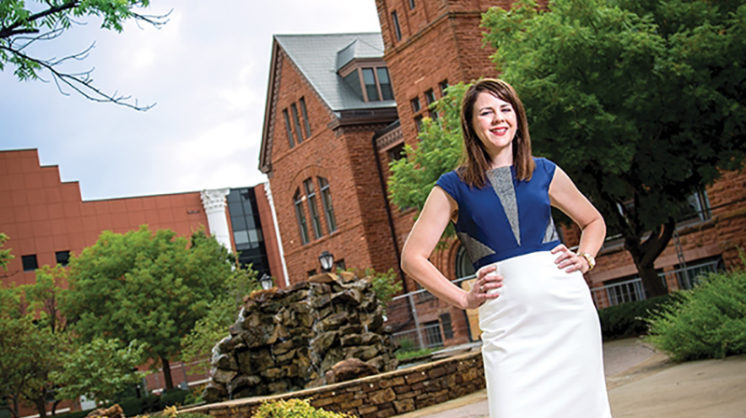 When Asked About Famous Stunt Doubles, Adrienne Nobles Pointed Out That She’s Often Likened To Wonder Woman, in terms of appearance, but anyone who knows the stunning and confident assistant vice-president for UCO’s University Relations knows that the Leukemia and Lymphoma Society’s Woman of the Year could pass for Wonder Woman any day of the week.

Oklahoma City, although my family moved to Nashville when I was 13. I lived a few other places before moving back.

Congratulations on your recent recognition as Woman of the Year! How did you get involved with the Leukemia and Lymphoma Society?

Thank you! I have a friend who is a leukemia survivor. She invited me to a meeting, in hopes that I’d take on the challenge of raising funds this year.

Is fundraising something you normally do?

Not at all – it was way outside my comfort zone.

At some point, though, you agreed to do it.

My plan was to hear what the organization needed and then think it over a couple of days before making a decision. Then I got in the car and NPR was doing a feature on the radio about some promising research for leukemia and discussing how their progress is fueled by research dollars. I took it as a sign.

How did the campaign turn out?

I had the support of a phenomenal team and we raised more than $37,000.

What was your first job?

When I was a teenager, my first job was working at Opryland every summer. I ended up working there seven seasons.

Do you own a Minnie Pearl hat?

No. And that signature “Howwwwwwwwdyyyy!” of hers got real old. It played over the speakers about a hundred times a day.

What career did you think you’d have when you were younger?

I wanted to be a movie star, but then I decided that was a hard life, so I wanted to be an anchorwoman. I eventually did an internship for the ABC affiliate in Hopkinsville, Kentucky, where I later became a news reporter.

Do you have any notorious doppelgängers?

I get Wonder Woman a lot. Also, Katie Holmes and Maggie Gyllenhaal.

I can see you in all of them! And how appropriate that you’d be compared to Wonder Woman. Have you ever gone as Wonder Woman for Halloween?

No. I think people have a certain expectation of what that would look like and I’d hate to disappoint them.

What day is your birthday?

Do you think you have typically Taurean traits?

What do you wish you’d never given away?

I once gave away a red Banana Republic pencil skirt that looked great – I’m still not sure why I got rid of it. It was during a serious closet purge. To this day, I pine for that skirt!

What do you wish you’d started doing long before now?

Embracing who I am and not obsessing about what people think.

What’s not all it’s cracked up to be?

Where are you likely to be on a Friday night?

At home, sitting outside with a glass of wine in hand and jazz on the stereo.

What do you most value in your friends?

A good sense of humor, loyalty and mutual acceptance.

What do you think your friends value most about you?

The same – a sense of humor, loyalty and honesty.

Where should I eat this weekend?

Ooooooh, I have some good ones since I have brunch with a group of friends every Sunday. We love the brunch at West, Packards, Park House, Iguana and Whiskey Cake. Also love the queso at 1492.

Is there anything you’d change about your childhood?

At St. Luke’s (United Methodist Church), we were encouraged to keep a gratitude journal for a year, and I wrote about a lot of things I’m grateful for. It was a great experience.

How do you think you’re different after 365 days of memorializing your gratitude?

I think it’s easier now to recognize and appreciate the small moments.

• I used to write horoscopes for a magazine in Scottsdale, Arizona.

• I was once a news reporter.

• One summer, I found homes for 15 kittens, which I marketed as “portable heating systems.”

• I once got to do an acrobatic maneuver in an airplane as part of an interview when I was a reporter. The pilot told me, “You’re the only one who didn’t throw up today.” Luckily, my mom and dad didn’t live in that market!