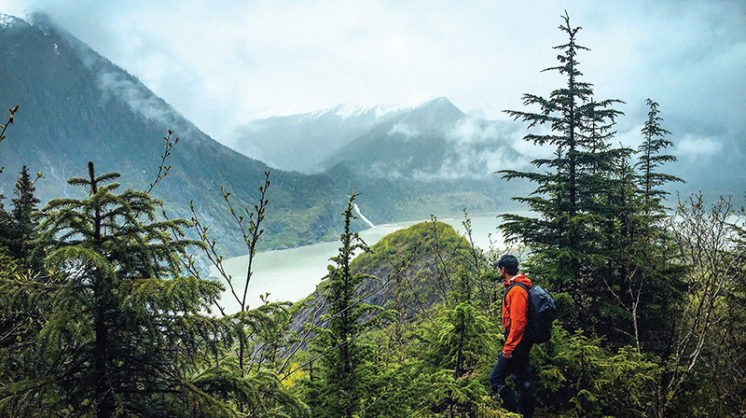 The bald eagle, aside from being one of the avian world’s most formidable predators and our national bird, and whose often-crude rendering is splashed across jerseys and helmets of sports teams countrywide, can do the backstroke.

We’d seen perhaps a hundred eagles on our weeklong journey with Un-Cruise through southeast Alaska’s Tongass National Forest from Juneau to Ketchikan. Eagles riding the thermal winds birthed from the roaring waterfalls that cascade down the glacially carved walls of the mighty Misty Fjords National Monument. Eagles perched upon massive icebergs adrift like wayward sapphires in Alaska’s steely waters. So common in Alaska was this once-endangered raptor that a pair went almost entirely unnoticed as they circled a remote beach, just above a grizzly bear that lazily patrolled the shoreline searching for a midday snack. Just offshore from said bear, a humpback and her calf breached, leaving a bow of Un-Cruise’s nature enthusiasts struggling in “ahh” with which direction to look.

One morning, on the fourth day of my seven-day Alaskan adventure, I saw from the stern of the boat what I thought to be a sea otter flailing 20 feet offshore. Otters aren’t uncommon in Alaska, but they’re rare enough that to see one was a thrill. However, as I watched it thrash closer, I saw that this otter had a very white head, was clad in feathers and propelled itself along the water’s surface not with adorable otter paws, but with mighty wings.

“It’s an eagle,” said Christian, one of Un-Cruise’s five naturalists, as he approached behind me.

“Eagles can swim?” I asked, incredulous.

With Michael Phelps-like skill, the eagle backstroked its way to the water’s edge, hauling in its talons a massive, still-flopping fish. Breakfast.

“Eagles are awesome,” said Christian. We watched as the eagle began to casually tear apart its meal. A moment later, a second eagle joined. Above them, the piercing cries of a third. 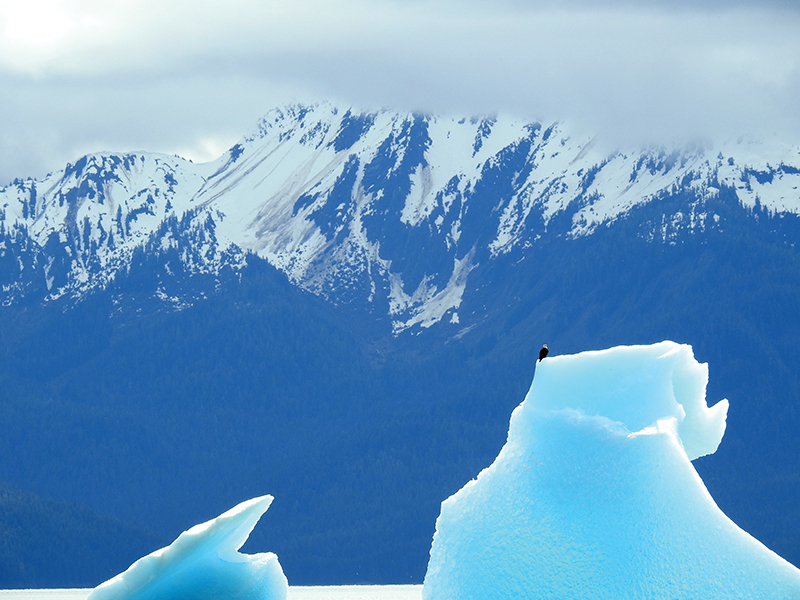 In a couple of hours, I would be going on an eight-hour hike along a raging river through a remote temperate rainforest, en route to a lake just under the island’s snow-capped alpine line. There, too, likely would be eagles – but in this current moment with the swimming eagle before me, like so many moments on my journey through Alaska’s eastern channel, what might be happening later in the day simply didn’t matter.

Transcendent moments like these in this part of the world weren’t anomalies. They were simply Alaska.

For 20 years, Un-Cruise has served as a small, intimate and educational alternative for cruisers and outdoor enthusiasts who love the water but want to avoid the crowds and clichés of so many of the world’s larger cruise ships. Given the smaller nature of the Un-Cruise vessels and the unrivaled insider knowledge and talent of the ship’s captains and guides, passengers have access to virtually untouched wilderness from Hawaii to Alaska; the Pacific Northwest to the Galapagos, Costa Rica and Panama. Each day, boats offer guests a variety of excursions suitable for any age, skill set or physicality. From hikes and long sea kayaks to skiff boat rides and wildlife viewing, each excursion is led by world-class naturalists who offer insight into every aspect of nature from geology to marine biology, land mammals to swimming eagles.

As you embark on an Un-Cruise, the captain tells you the only thing that he or the crew knows is that in seven days, you will disembark. There is an itinerary, but because the goal is to see the best nature and wildlife the destination has to offer, it can be adjusted based on what happens along the way. If there is a pod of stunning orcas making their way across a mountain-lined bay, as was the case on my second day in Alaska, odds are good that the boat is going to stop and allow guests to watch the majestic mammals until they disappear into the horizon. 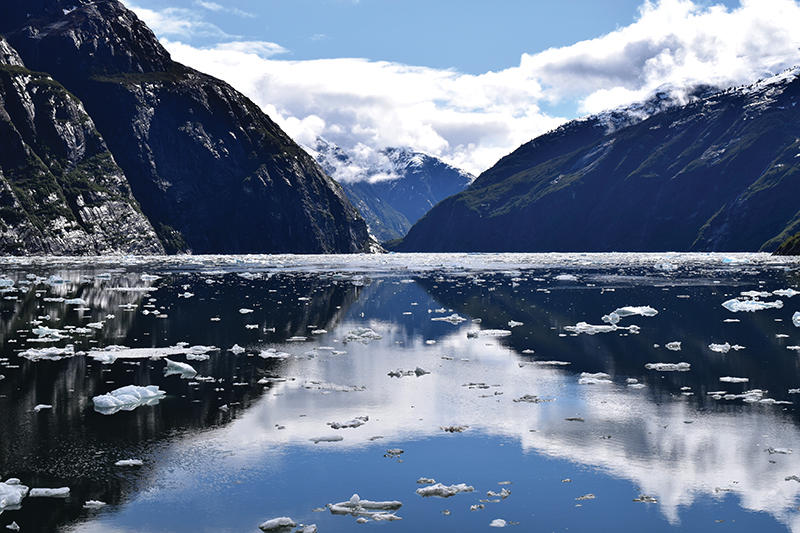 While offering one of the world’s greatest wilderness and backcountry exploration opportunities, Un-Cruise is not without its luxuries, as well. The rooms – which vary in size – are comfortable, and the bar and common areas are spacious, casual but tasteful and complete with books and DVDs about the area. The food is reflective of the region and the menu is playfully and thematically designed, offering wine pairings and outstanding desserts. Dinners are seated, and breakfast and lunch are served buffet style. At night, the ship’s naturalists offer playful, informative, interactive and often inspiring talks over relevant topics – and they encourage guests not only to push their comfort zones during the day, but to share their experiences with others on the boat in optional structured and unstructured discussions.

Our ship sailed mostly at night, so each morning as I opened my cabin door, before me was some new combination of temperate rainforest, sheer cliffs and drifting ice, porpoises, sea lions and remote islands. The Alaska sun was up and bold by 4:45 a.m. Coffee would be served in the bar area by 5, and by the time I arrived to the galley, several others already had gathered to scan the shoreline, watching for wildlife and absorbing the scenery in the peaceful morning light.

Some days I would choose as my excursion a single, more intense activity, referred to as a “hard charger.” Other days, I chose two simpler outings. But every day was something. Every day was incredible.

Over the course of my seven days in Alaska, I hiked a combined 15 miles. I kayaked eight sea miles through a fjord alongside a half dozen waterfalls. I explored invertebrates, eel and crabs during a low tide snorkel in 43-degree water. I rode a stand-up paddleboard until my feet cramped. I read books, took photographs, dove into frigid water in what is known affectionately as the “polar plunge” and watched the sunset turn the sky to a color of purple and gold that exists nowhere else in the world. It was the world in the way it might exist had it never been graced by humans. A world of bears and icebergs; rainbows and roaring rivers. And eagles. Lots and lots of beautiful swimming eagles. 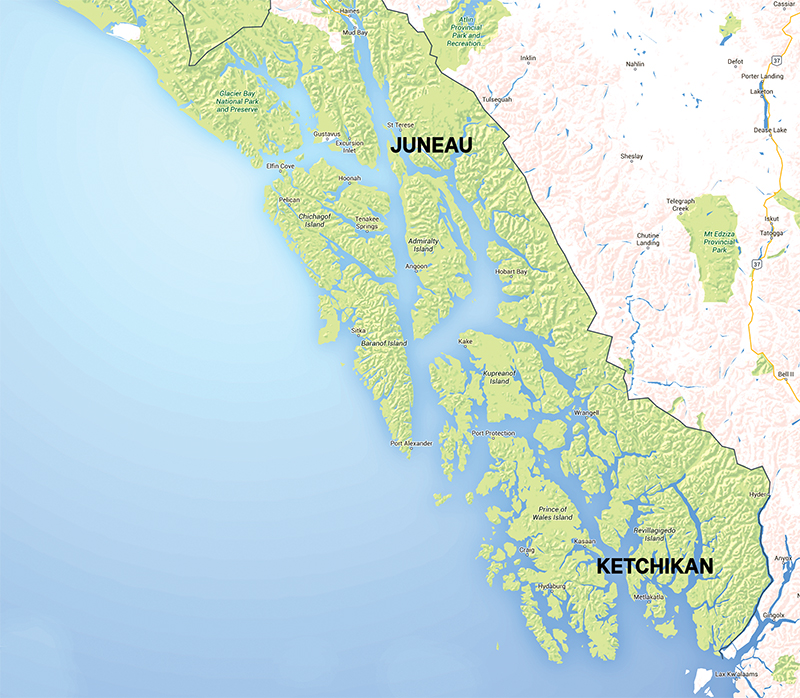 Your Un-Cruise experience on the Wilderness Explorer through Alaska will either begin or end in Juneau or Ketchikan, and while Un-Cruise takes you into wilderness that few get to see, adding a night on either side of your trip will allow you to spend time in two of Alaska’s most notable and historic towns.

Juneau (population just north of 31,000) is Alaska’s third largest municipality, a charming, culturally rich tapestry of a once-prosperous silver mining industry. Rich in native Tlingit culture with endless hiking trails and a kitschy vibe that comes with being a cruise ship port, Juneau is a destination unto itself. From its art galleries, totem poles and terrific restaurants to its waterfalls, rain forests and the impressive Mendenhall Glacier, whether your Alaskan cruise begins or ends in Juneau, it is an area that must be explored and experienced.

This charming inn has a contemporary feel, providing the familiarity, service and ease of a bed and breakfast without, thankfully, the “hovering.” With a rooftop hot tub complete with views of the ocean, The Silverbow is within walking distance from some of the town’s best dining, hiking trails and shopping thoroughfares.

A visit to Mendenhall Glacier with its adjacent roaring waterfall is impressive. Hiking to breathtaking bird’s-eye views of Mendenhall with the friendly, knowledgeable guides from Adventure Flow brings the glacier and the surrounding wildlife-rich rain forest to life.

The Mount Roberts Tramway takes visitors above the rain forest canopy to the top of Mount Roberts, where they can grab a bite to eat, take in the views or take a leisurely stroll above the alpine line. 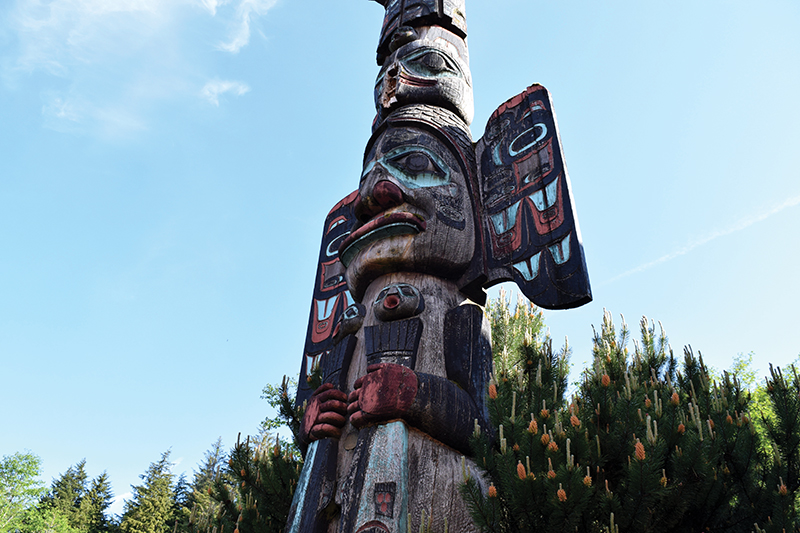 From the once-infamous red-light district known as Creek Street to its vast collection of totem poles, Ketchikan is the embodiment of Alaskan history, kitsch and appeal. A town of 8,000, whose population nearly doubles with the arrival of two large ships, Ketchikan’s waterfront shopping and seaplane excursions into Misty Fjords National Monument make it a fine spot to begin or conclude your Alaskan adventure.

The Inn at Creek Street and New York Hotel

Were it not for the flat screen TV, the free WiFi and the comforts of a well-appointed room, The Inn at Creek Street would feel as though it exists just as it did at the turn of the century – the last one. This small two-story, waterfront hotel is located directly next to Creek Street, Ketchikan’s unique and historic walkway.

Stunning totem poles of the Tlingit, Haida and Tsimshian people are scattered all over Ketchikan, but to really absorb the beautiful towers, you must visit the Totem Pole Heritage Center. Home to dozens of totems dating back to the 19th century, it’s a font of knowledge about the history of the Tlingit people and the area in general.

Known in the ’20s as the local red-light district, Creek Street is actually a boardwalk built on wood pilings over the roaring Ketchikan Creek. Along Creek Street are some of the area’s greatest curio shops, restaurants and the famed Dolly’s House Museum, dedicated entirely to the historic malfeasance of lustful locals.

While many cruise ships take visitors through the epic Misty Fjords, it is another experience entirely to see the fjords by seaplane. These trips depart from Ketchikan constantly and offer epic views of the fjord, as well as creating opportunities to spot wildlife in otherwise inaccessible, beautiful areas.