An Affair to Remember - 405 Magazine 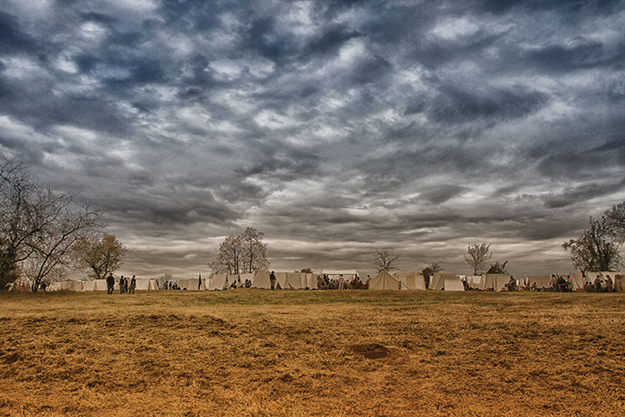 The Sky Over The Rolling Prairie of Eastern Oklahoma is The Color of Pewter. The smell of campfire smoke hangs in the air. Confederate battle flags fly above men in uniform who cluster near white canvas tents. Union cavalry officers trot by on matching chestnut horses. The Confederates around the fire ignore them, laughing and talking of events that transpired 150 years ago in the present tense, as if they had just happened … because they had. It’s the Saturday before Veterans Day, 2013.

Every third year, history buffs from around the country gather north of Checotah like so many chess pieces, acting out parts assigned long ago by the hand of fate. They are there to re-enact a Civil War battle, the largest military clash within the borders of modern-day Oklahoma.

The names used to describe what happened on the site July 17, 1863, have a whimsical ring. Those from the North called it “The Engagement at Honey Springs.” Southerners would call it “The Affair at Elk Creek.”

But there was nothing romantic about that rainy Friday, two weeks after the Battle of Gettysburg.

The forests and fields in the old Creek Nation would see the most important and deadliest fight of the 107 documented Civil War “hostile encounters” in Indian Territory. The stakes were high. The issue being decided, in hand-to-hand combat, was whether the land west of the Mississippi would be controlled by the Union or the Confederacy.

The 3,000-acre Honey Springs Battlefield, between Rentiesville and Oktaha, runs over the McIntosh County line north into Muskogee. About 3,000 Union troops faced off against an estimated 5,700 Confederate soldiers, most of them waiting in the brush north of Elk Creek, stretched in a line a mile-and-a-half long. Incessant rain had turned much of the Confederates’ Mexican-made gunpowder into paste, causing misfires and accidents and prompting some frustrated fighters to resort to using their guns as clubs. Some of the battle was waged hand-to-hand, bayonets drawn. Over a span of six hours, according to Christopher Price, the battlefield’s director, between 250 and 300 men – nearly all of them Confederates – died near the rain-swollen creek and the woods-dotted field.

The toll makes July 17, 1863, one of the deadliest days in Oklahoma history, on a par with the estimated 300 claimed by the 1921 Tulsa Race Riots. But unlike most other fateful events, the Battle of Honey Springs is relived time and again.

The re-enactors are motivated by different reasons, Price said: “Some of them like the history, understanding what life was like then. It’s one thing to read about the Civil War, and another to be right next to one of those canons when they’re set off. Some of them have ancestors who fought. And, well, some of them just like to shoot guns.”

The Union victory at Honey Springs was the first time in history that black soldiers fought shoulder-to-shoulder with Native Americans and whites, and was the rare Civil War battle in which whites were in the minority on both sides.

The 1st Division of the Army of the Frontier, commanded by Maj. Gen. James Blunt of the U.S. Army, included the 1st and 2nd Indian Home Guard, members of the Five Civilized Tribes who did not support tribal treaties of alliance with the Confederates. Also fighting for the Union at Honey Springs: the acclaimed 1st Kansas Colored Infantry, comprised mostly of former slaves. Theirs was the first-ever African-American regiment, and the fourth to be mustered into federal service.

The 1st Kansas regiment, however, defeated the Texans so decisively that Blunt’s official report declared:

“The First Kansas (colored) particularly distinguished itself; they fought like veterans, and preserved their line unbroken throughout the engagement. Their coolness and bravery I have never seen surpassed; they were in the hottest of the fight, and opposed to Texas troops twice their number, whom they completely routed. One Texas regiment (the 20th Cavalry) that fought against them went into the fight with 300 men and came out with only sixty.”

Though markers at the Honey Springs Battlefield memorialize the lives lost, there are no tombstones. The bodies of most of the Confederate dead are interred in mass graves, buried by Union soldiers after the Confederates were driven out. The Confederate Gen. Cooper wrote Gen. Blunt a note of thanks for the courtesy.

The recognition of Honey Springs as a pivotal moment in American history gained ground in 2013 when the National Park Service designated the battlefield a national historic landmark and part of the National Underground Railroad Network to Freedom. A new visitors’ and interpretative center is scheduled to open next year.

At the July 2013 ceremony and memorial service announcing the honor, re-enactor Lynn Shackleford, a member of the Trans-Mississippi Rifle Veterans Reserve, said: “We re-enact to educate, educate to preserve, and preserve to honor … We believe in America. Some people consider what we do playing, but to us it is serious. We get a lot out of it, and we want to give back.”

Price would love to see more awareness of the diversity of the Honey Springs forces. Although there are many re-enactors with Indian ancestors, “We’ve been trying for a long time to get an African-American regiment. A lot of the re-enactors are older now, and we’re trying to get more people interested in it. But it can be a hard sell: ‘Hey, why don’t you spend $400 on a wool uniform that you can wear in the heat and be all sweaty and come hang out with us?’”

For Mike Farrar, the camaraderie is what has made his 20 years as a re-enactor.  A retired Houston police officer and former chief of police of Corrigan, Texas, he made the pilgrimage to Honey Springs for the battle’s 150th anniversary. Though his great-great grandfather Robert Farrar fought for the Confederacy out of Louisiana, Mike Farrar participates as a “Confederalist,” with uniform tweaks that allow him to serve as either a Union dismounted cavalry soldier or a Confederate artilleryman.

What would his great-great-grandfather, who surrendered at Vicksburg the same month as the battle at Honey Springs, and his fellow Civil War soldiers think of 21st century re-enactments of their 19th-century battles?

“They’d probably think we were a bunch of silly assholes. They didn’t go around re-enacting the Revolutionary War, or the War of 1812.”

He cast a glance over at the lines of cars and pickups and trailers parked down the hill in a neighboring field and smiled. “I’ll bet they’d like to see our horses, though!”

Editor’s Note: This is the 17th installment in a continuing series as author and photographer M.J. Alexander chronicles her travels across the state of Oklahoma.