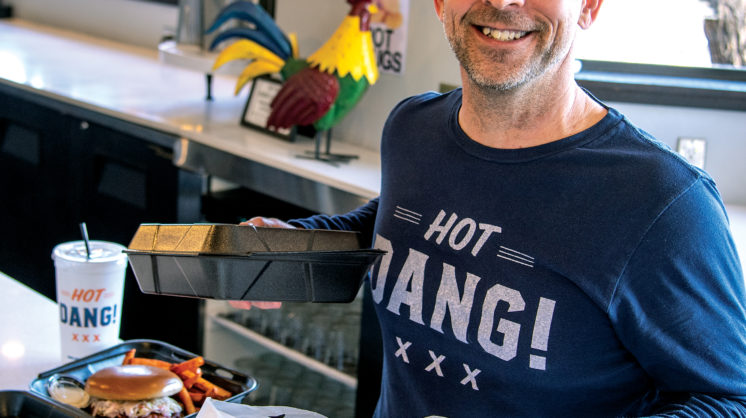 App-based technology has been increasingly disruptive to the food service industry in good and bad ways since Yelp, Urbanspoon and even online menus first arrived on the scene. Now, restaurants are trying to keep up with or regulate the ways in which tech can affect their business models.

Jimmy Mays, operating partner in two OKC and two Tulsa restaurants, said their company is using ChowNow. “The service integrated seamlessly into our website, and they designed an app specifically for us,” Mays says.

The catch? It’s pick-up only. Like many restaurateurs, Mays and his partners are eschewing third-party delivery apps for two very important reasons: customer service and food quality, and Mays said the latter is an important part of the former.

“We didn’t pay the fee to be listed on Postmates, so people had to write it in,” Mays says. “That meant a call had to go from the app to Las Vegas, and then someone in Las Vegas would send the order to a driver and finally to us. It’s a really bad version of the telephone game. We ended up with irritated customers, for things over which we had no control.”

Marc Dunham, chef-owner of Nashbird and Iguana Mexican Grill, said that nearly 25 percent of Nashbird’s sales come via takeout apps or delivery apps. He, too, made a decision to use a single app, and he chose Postmates.

“Working exclusively with them drives down the percentage we pay to Postmates,” Dunham says. “The increased prominence of our brand on the app because of the exclusivity has led to a noticeable increase in the past three months.”

According to Morgan Stanley Research, 11 percent of restaurant sales are expected to come from delivery services by 2022, so Nashbird is already way ahead of the curve.

Still, the percentage third-party apps charge can be prohibitive for businesses – partnering with Postmates can cost 30 percent of the entire transaction.

“I’d have to triple my sales to make that worthwhile,” Mays says. “It’s not financially viable for restaurants running on narrow margins.”

We spoke to Rachel Cope, founder of 84 Hospitality (Empire Slice House, Goro, etc.), just as she was preparing to leave for a pizza expo in Las Vegas, where she will lead a panel discussion on third-party delivery services.

“Easy E (Slice Shop) gets about 25 percent of their sales from Postmates and DoorDash,” Cope says. “It makes sense for pizza. Chef Jeff Chanchaleune and I agree that we won’t use it for Goro, though, because to-go ramen is not ideal. We want to control quality and the guest experience.”

Delivery apps aren’t the only disruptive technology in food service. One of the most competitive areas is point-of-sale technology, the program and hardware that servers use to enter your order.
Dunham has elected to use an Android-based system called Toast. The interface is very intuitive and the flexibility of the system allows for a variety of devices.

“The cloud-based apps are the future,” Dunham says. “I’m pretty sure all [point-of-sale] systems are headed that way. If the Internet service crashes, Toast still captures transactions, much like Square, but it also integrates with back of house, accounting, customer service and customer reward programs.”

As customers come to expect a more tailored experience, restaurants will need to find ways to integrate technology that makes sense for the business and the customer, and that’s a difficult balance to strike.