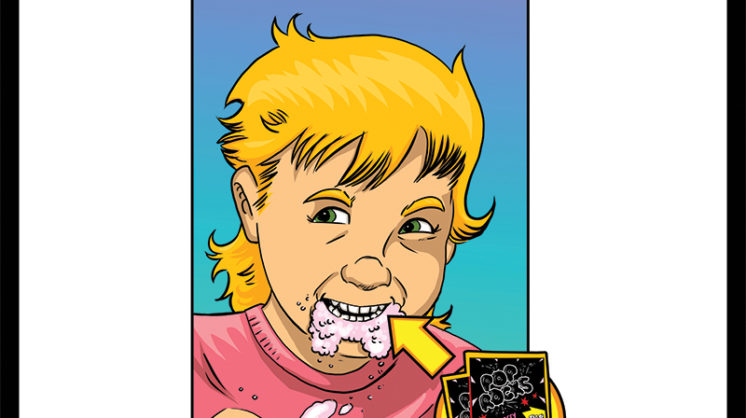 Why isn’t April Fools’ Day a national holiday? I don’t subscribe to the retail-driven theory that you can “keep Christmas in your heart” all year, but I can get on board with any holiday that celebrates pulling one over on the gullible. As long as it’s innocent fun and not aimed at the elderly, I say, why limit it to one day?

With an older brother and sister to initiate me as the doe-eyed target of every stunt, I developed a deep appreciation for tomfoolery and Whoopee cushions at a tender age. Specifically, I recognized early which side of the prank to be on.

My siblings had either seen or plotted every gag years before me, so I resorted to turning my aim onto my unsuspecting parents – that kind couple who gave me life and, in return, found themselves on the receiving end of a continuous loop of pranks that preyed upon their darkest fears. At the risk of revealing too much of my sadistic streak, I confess to reveling in the reaction some of those pranks induced in my parents. Standards: low. Entertainment value: high.

When I was 9 years old, I convinced my dad that the 25 Tic-Tacs I’d just poured into my mouth were really LSD I’d received from a vagrant who was going door to door in the neighborhood, trying to hook kids on drugs. Logic momentarily escaped him and this somehow seemed a legitimate threat. It was my less-than-plausible, on-again, off-again acid trip that weakened the story plot.

My mother was never spared, either. She had barely recovered from the shock of seeing me foam at the mouth during a recent bout with “rabies” (induced by a mouthful of Pop Rocks and the fizz center of ZotZ candy) when my sister and I decided to bake some brownies, place them strategically on the dining room floor and loudly accuse our dog of impropriety. When I ate the brownie in front of our mother, she nearly passed out.

After years of coming home to rubber bands around the handle of the kitchen sink’s sprayer hose, doors rigged with firecracker poppers and tales of the day’s top 10 prank phone calls, my parents were eventually desensitized to our shenanigans. It was time to take the show on the road, which meant moving beyond lying in the street with splattered ketchup next to my head.

Tucking a piece of bar soap under the mouthpiece of the school water fountain never failed to produce the type of reaction that fed my habit. Knowing it would take extra time for my classmates to get the taste of Ivory out of their mouths, I advanced the clock at the front of the classroom, which got us to lunchtime – and, by extension, to recess – 20 minutes earlier than the other classes. In my mind, the benefit of being first in line on Frito chili pie day or cinnamon roll day far outweighed any inconvenience that a soapy mouth caused. You’re welcome.

By the time I was old enough to go away to camp for the summer, I had gladly exchanged a good night’s sleep for some time-tested-but-ever-hilarious late night hijinks like Saran Wrap over the toilet bowl, the drop of green food dye in the shampoo and baby powder in the bed sheets (short-sheeted, of course). Dropping a piece of bologna into the slack-jawed mouth of sleeping campers never got old, nor did stringing the aisle between bunk beds, which guaranteed a gratifying thud at 2 a.m., when the first sleep-groggy camper climbed out of bed and hit the floor on the way to the bathroom to a waiting toilet seat that had been meticulously coated with Vaseline.

To this day, nothing warms my heart more than predicting who will select the caramel onion among a tray of caramel apples, listening for the report from an exploding cigarette banger, or seeing who will gladly accept a glue stick instead of ChapStick.

Is it always April Fools’ Day in my heart? It’s something I’m sure to ponder as I dust off the rubber vomit.