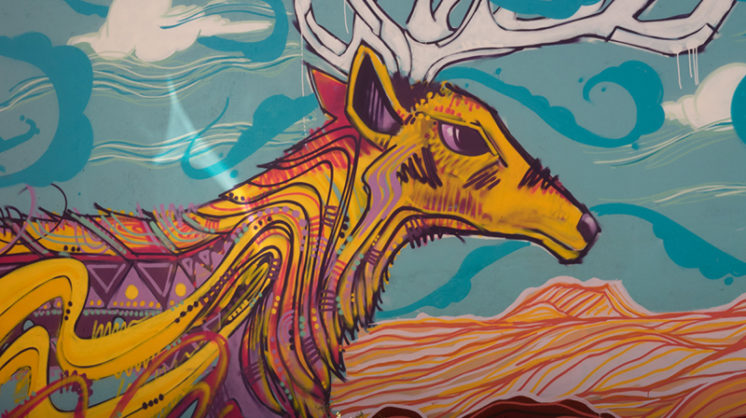 Traffic-calming murals should soon be in place at a number of vehicular hotspots in the city. Current Studio is working with residents in its neighborhood base Classen Ten Penn to create the artworks, in an attempt to help slow traffic down.

“This is the first time, to our knowledge, that this has been done in OKC,” says Current Studio founder Kelsey Karper. She explains, “The idea has been tried and tested throughout the world, and serves as a traffic calmer – as drivers either don’t expect artwork to be there, or associate it with slowing down as a sign of a high-pedestrian area.”

At the request of Classen Ten Penn residents, three busy street intersections have been identified, and Current Studio is appealing for artists to create the right designs for each spot. The project is already fully funded thanks to grants from the city’s Strong Neighborhoods Initiative and the Mid-America Arts Alliance.

Preference will be given to projects that consider the context of the neighborhood and celebrate the cultural diversity of the residents, Karper added.

Last year, Current Studio worked with nearby Eugene Field Elementary School to create a forest-themed mural for the school’s courtyard entrance that incorporated its deer mascot. Current Studio also sponsored artists to teach at the school after it lost its funding for a visual arts program.

This project, which also includes an “artistic bike rack” and colorful trash cans for McKinley Park, is aimed at engaging neighbors through functional art, instilling a sense of neighborhood pride and helping increase safety, according to Classen Ten Penn Neighborhood Association.

An artist forum and information meeting will be held on Monday Nov. 13. The deadline for designs is Dec. 1, with the artwork set to be unveiled in June.