At Home With History - 405 Magazine 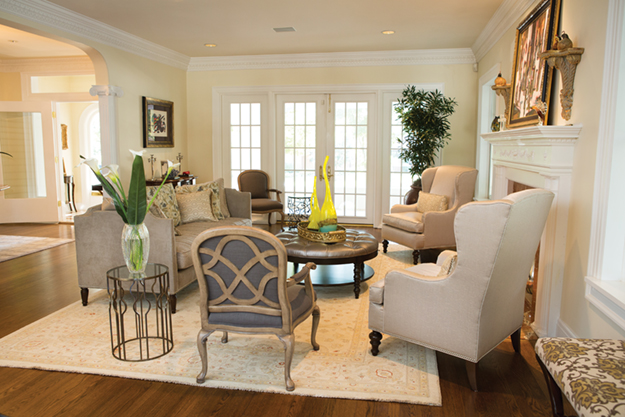 Living in the past can be a good thing. When the comfort and conveniences of modern life are successfully integrated with the lasting architectural elegance of houses whose beauty continues to amaze after nearly a century, the results are wondrous indeed. A neighborhood rich with these marvels invites you to see for yourself, by taking the 47th annual Heritage Hills Historic Homes Tour.

Chair Marsha Funk and co-chair Katy Leffel organized the scenic ramble through one of OKC’s most beautiful neighborhoods. The five occupied homes on the tour are prime examples of the diverse ways residents honor the historic character of their houses (many consider themselves stewards rather than owners) without sacrificing contemporary amenities or style, and visitors will find varied decorative schemes, information about renovations and restorations and historical tidbits along the way. Special treats this year include a Jazz Age fashion exhibit at the Overholser Mansion, vintage automobiles at the homes and an optional narrated neighborhood walking tour, plus deli items and pastries from Ingrid’s Kitchen and even a gift shop.

Wander as you will – it’s a self-guided tour whose stops can be seen in any order – on Saturday and Sunday, November 2-3, from noon to 5 p.m. To see the homes in a whole new light during the Friday night Twilight Tour and enjoy the accompanying gala at the Oklahoma Heritage Museum, call 405.620.1061.

Proceeds benefit the nonprofit Heritage Hills Associate Board of Historic Preservation Inc., dedicated to maintaining Oklahoma City’s architectural and cultural legacy. That’s the purpose of the tour as well; an entertaining and informative event that helps to ensure the protection of cultural landmarks for future generations. Isn’t that a worthy legacy in itself?

One of the most recently built homes on the tour (though still more than 80 years old) has roots in Moorish architecture – and in Oklahoma City history. Shortly after its construction it was home to a U.S. ambassador, and the chairman of the board of Oklahoma’s largest bank lived here for nearly 50 years. Before moving in, the Careys made extensive repairs and updates, but left the character of the home intact, so that it looks much as it did when originally built in 1929.

Don’t-miss details: Carey wasn’t kidding when he said this home’s architectural details reward inspection: it’s easy to be overwhelmed by the magnificence of the two-story great room with its huge ceiling beams, thick curving archways and rich tapestries – but look closer to see that those beams are handpainted, and the sconces in the spiral staircase are winged serpents. Still, Carey says his favorite spaces are the sunny backyard under twin magnolias, and his pecan-paneled library.

This expansive home was built by the renowned dentist-turned-developer G.A. “Doc” Nichols, the most prolific builder in Heritage Hills from 1917 to 1922. With a building permit of a whopping $25,000 for this twenty-room home, it was not only the first home Nichols built in the neighborhood, but also his most expensive. Today the light-filled house still contains original architectural features reflecting Nichols’ love of Southwestern architecture, as well as the tasteful updates and renovations of subsequent homeowners, like Dr. Hampton’s immaculate and inviting kitchen.

Of special note: Observe the almost coral-colored table in the front entryway; it didn’t belong to Dr. Hampton, but the home’s previous owners left it behind because its marble matches the fireplace surround, and they felt it should stay with the house.

Frank J. Wikoff (one of the founders of Stillwater) loaded this 1916 home in the young state’s capital with distinctive architectural accoutrements: stone window sills, a mock tower, walnut paneling in the dining room (supposedly cut from a single tree), copper front doors and more. Decades later, the English manor has amassed a distinguished history of hospitality and graciousness – and it still looks fantastic.

Inspired design: “I love the main floor’s great room,” says Dr. de la Garza, calling it “a concept ahead of its time.” He also speaks highly of that dining room paneling, and the enduring character of the quarter-sawn oak floors.

Home of Kyle and Sara Sweet

This Georgian home’s exterior remains virtually unchanged from 1921, when it was built for a rich cotton buyer from Ardmore, while the interior still houses some examples of cutting-edge (for the Jazz Age) technology, like an intercom telephone system linking the upper and lower floors with the servants’ quarters behind the garage. Later residents, including the Sweets, have seamlessly introduced more current technological enhancements to meet the needs of a 21st-century family.

Homeowner’s favorite touch: When asked, Sara Sweet immediately praised the central staircase that pulls entrants’ eyes upward to a massive wooden pedestal topped by “Buffalo Trails,” a bronze by Colorado sculptor Jim Gilmore. Visitors may also notice that each of the home’s fireplaces has a different surround, all of which are original to the home.

Home of Michael and Katherine Nichols

Maintaining the vintage architecture of this 1937 English manor house is a point of pride for Michael and Katherine – it was Michael’s childhood home, after all – but since they have a family of their own, it required some modernization. The result is a tour de force that weds a snazzy new kitchen and redesigned upstairs with traditional comfort.

Check it out: Katherine enthuses, “The bay window seat overlooking the pool; my kitchen with its big island; the butterfly wallpaper on the ceiling [in the dining room] – I love it all!” The wall covered in black-and-white family photos is a lovely decorative decision as well.

The grand edifice that serves as Tour Central was built pre-statehood, on a grassy hill that was at that point well removed from Oklahoma City proper. Over a century later, it still contains the original furnishings and belongings of the Overholser family – chairs, dishes, silverware, even children’s toys. It’s an unusually clear and fascinating portrait of a bygone age, in a magnificent house that looks right at home among its historic neighbors.

Admission is $15 on the days of the tour but $12 in advance; get tickets at heritagehills.org/hh or at these Oklahoma City locations: