At Peace in the Rodeo Graveyard - 405 Magazine 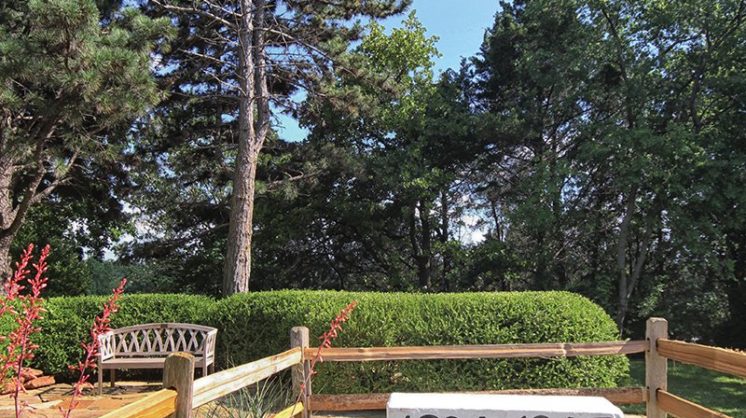 The bones were dug up a half-century ago, removed from their resting place near the Wyoming-Colorado border and transported 640 miles to Persimmon Hill.

On April 30, 1966 – a cooler-than-usual Saturday, marked by traces of fog – they were reburied in side-by-side coffins in a shared grave in what was to become Oklahoma City’s most exclusive cemetery.

Fifty years after its first interment, the south garden of the National Cowboy & Western Heritage Museum is now home to memorials to 11 souls, and the graves of four.

Beyond the lobby statue of a defeated warrior astride the nameless horse of “The End of the Trail,” behind the four anonymous galloping bronze steeds in “Coming Through the Rye” on the Western States Plaza, the museum’s manicured gardens are home to winding paths, towering shade trees, koi ponds, rock-lined waterfalls … and these modest, heartfelt tributes to legendary horses and bulls with names that resonate in cowboy lore as symbols of courage, determination and the spirit of the American West.

MIDNIGHT The first interments were the earthly remains of a pair of jet-black Canadian-born bucking horses that dominated the rodeo circuit between the world wars. Midnight was foaled sometime between 1907 and 1910 on Jim McNab’s Cottonwood Ranch in southern Alberta. Son of a thoroughbred mother and a Morgan-Percheron sire, the 16-hand, 1,300-pound Midnight dominated the circuit for 11 years, receiving top billing at rodeos as “the buckingest horse in the world.” He made his final appearance at the 1933 Cheyenne Frontier Days rodeo and died on Nov. 5, 1936. At the 1937 Denver Stock Show, the crowd stood for a minute of silence in tribute. His Oklahoma City tombstone carries an epitaph penned by Colorado State Sen. Chris Cusack:

Under this sod lies a great bucking hoss.

There never lived a cowboy he couldn’t toss.

His name was Midnight; his coat black as coal.

If there is a hoss heaven, please God, rest his soul.

Sharing a plot with Midnight is a smaller stablemate, foaled in 1924 and purchased from the Tsuu T’ina First Nations tribe of the Sarcee Indian Reservation in Alberta. Tumbling Mustard, as he was first called, also became renowned for throwing cowboys. The question would be frequently asked: “Is that Midnight?’ The answer usually given: “Darn close” – or “Five Minutes To.” Tumbling Mustard eventually was renamed Five Minutes to Midnight. He is said to have been ridden to the bell 14 times out of 1,200 attempts, retired in 1946 and died Aug. 1, 1947. His epitaph reads:

Again the reaper has visited the corral

He took 5 Minutes to Midnight, the cowboy’s pal. 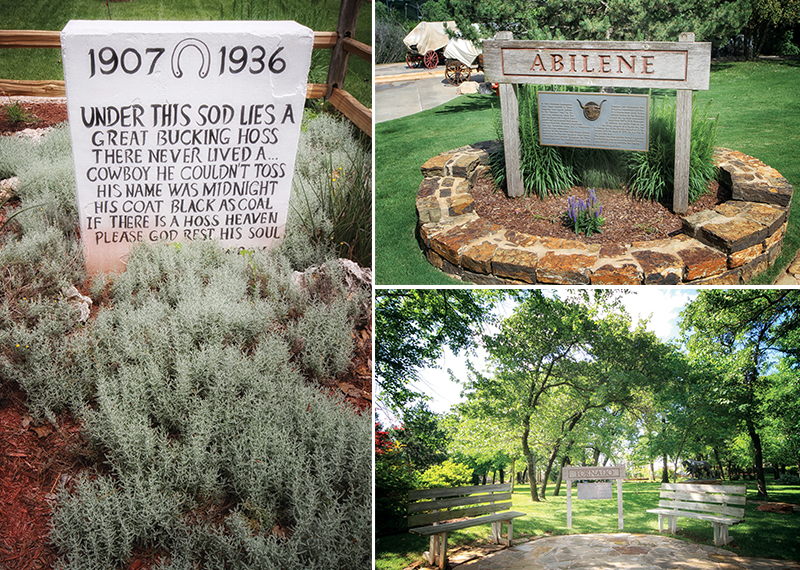 He was unridden in 220 attempts from his 1960 debut in Mesquite, Texas, to Dec. 1, 1967, at the National Finals Rodeo at the fairgrounds in Oklahoma City, when 46-year-old Freckles Brown of Soper drew Tornado in Chute 2 for the final ride of the night. Brown’s successful ride is arguably the most thrilling eight seconds in rodeo history, living on in song and legend.

Tornado was ridden four more times – once more by Brown – and retired two years later. His memorial plaque notes that Shoulders “retired his bull to a well-deserved rest in a lush pasture on his J Lazy S ranch at Henryetta, Oklahoma. Tornado died in 1972 of old age – he was 15 – and is buried here in the shade.”

ABILENE For four years, a Texas longhorn steer named Abilene – Ab, for short – held court as museum mascot from his corral on the grounds. His 2,100-pound frame and eight-foot horn spread was touted as the most massive of any living longhorn. Ab died in 1970 and is buried beneath a set of wood posts with a crossbar engraved with his name and a bronze plaque saluting him as a beloved ambassador and example of a bygone era.

In addition to the four graves on the museum grounds, seven horses are memorialized in cenotaphs around the gardens.

TIPPERARY The bucking horse Tipperary was discovered during a search for World War I mounts, and won by a saloonkeeper in a poker game. Foaled in the Long Pine Hills of South Dakota in 1905, he is credited with throwing more than 80 riders before stuntman Yakima Canute rode him to a standstill in deep mud at the Belle Fourche Roundup in 1920. He retired from rodeo in 1926 and died in a blizzard in 1932. He is buried in Buffalo, S.D., population 330, home to a bronze statue of his likeness by cowboy sculptor Tony Chytka, as well as the Tipperary Motel & Lodge and Tipperary Rodeo Arena.

POKER CHIP AND BALDY Colored a striking dappled iron gray, Poker Chip was foaled in 1950 on California’s Rancho Jabali. He is considered one of the best calf-roping horses in rodeo history, winning at the Pendleton Rodeo, Cheyenne Frontier Days and the Calgary Stampede before his retirement after a trailer wreck in 1962. Baldy was foaled in 1932 in Talala, Oklahoma, and raised on the Cross J ranch near Nowata. He carried riders to world championships in 1944, 1947 and 1949, earning more than $300,000 in prize money, and retired in 1950 after suffering a heart attack.

ELIJAH THE PACK HORSE Elijah, the most famous horse in the nation 60 years ago, is perhaps among the least known today. In February 1956, a wayward horse made international headlines for 100 days after a pilot discovered him snowed in near the top of a 12,800-foot saddleback ridge in the Colorado Rockies. Headlines ricocheted around the world, and an airlift was organized to drop hay to the horse, which a reporter from the Denver Post named Elijah, after the prophet who was sustained by ravens brining him bread in the wilderness. As the weather warmed in late May, a “fat and sassy” Elijah was led off the mountain to parties and parades. Turns out his name was Bugs, and had escaped his pack-trip guide owners the previous fall. Bugs returned to a quiet life and survived until 1971. 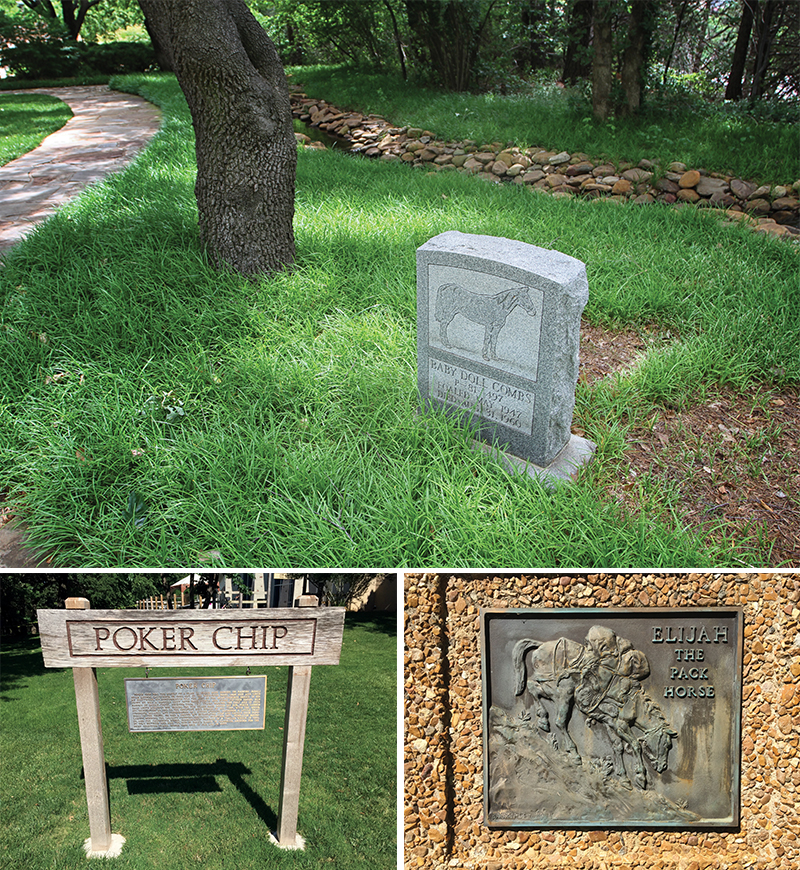 STEAMBOAT Foaled near Chugwater, Wyoming, in 1897, Steamboat was named for the whistling sound he made when he bucked, the result of an injury that chopped a bone near his nostril.  He was prized for stiff-legged, bone-jarring jumps that would boost the score of any cowboy who could ride him out, and became the first famous bucking horse in the world. A 1903 photograph of the flashy Steamboat, being ridden by cowboy Guy Holt, inspired the University of Wyoming logo. He was put down in Cheyenne on Oct.14, 1914, after contracting a blood infection from barbed wire. The whereabouts of his body remains a mystery.

HELL’S ANGEL Foaled near Dillon, Montana, in 1926, Hell’s Angel was a feather-legged, 1,300-pound son of a Percheron stallion and a Pinto mare, known for powerful jumps and high kicks. Over his 1933-1942 rodeo career, he was ridden successfully 20 times. In 1939, bronc riders voted him the World’s Greatest Bucking Horse. While returning from a tour in November 1942, Hell’s Angel was found dead in his railroad car at a stopover in Poplar Bluff, Missouri, and was buried near the tracks.

BABY DOLL Tucked under a shade tree at the far south of the gardens is a marker for Baby Doll Combs, foaled in 1947 out of Miss Boctick and Oklahoma Star Jr. She was purchased by Willard Combs of Checotah, and carried him to the 1957 world bulldogging championships – as well as carrying the cowboys who finished second, third, fourth and fifth, since Combs lent out Baby Doll to others for a cut of their prize money. She earned more than $400,000 for her riders before falling to a ruptured intestine at a rodeo in Salina, Kansas. She died in August 1960 in the arms of her heartbroken owner, who brought her back home to Checotah. The Nov. 7, 1960, issue of Life magazine published a photograph of graveside services for Baby Doll, including a line of grieving bulldoggers. 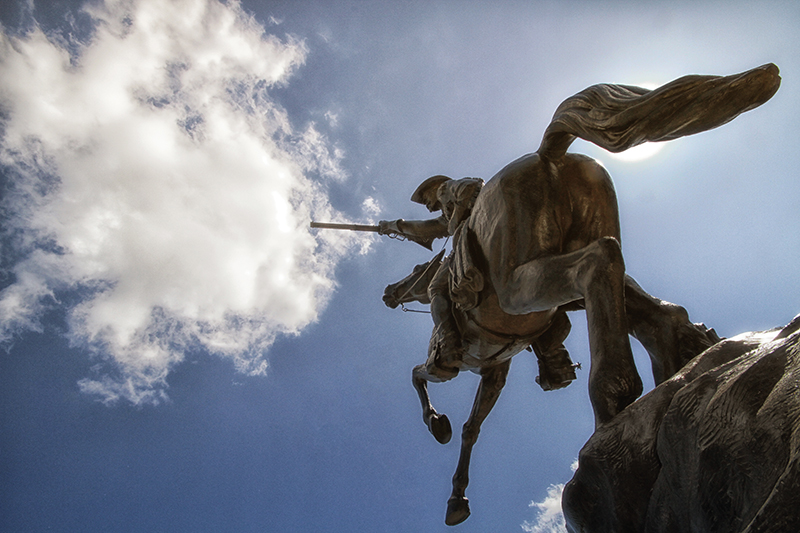 Larry McMurry’s iconic monument to Buffalo Bill Cody and his horse, Brigham, reaches 33 feet tall and weighs 19 tons, dominating the southeast corner of the gardens. Named for Brigham Young, in honor of his origins in Utah Territory, Cody called him the “fleetest steed I ever owned” and reported shooting dead 4,280 buffalo in 17 months from his back. At the end of his contract with the railroad, a 22-year-old Cody raffled off Brigham (10 chances at $30 apiece) to pay for expenses to send his wife and son to Leavenworth for the winter. A proud Cody recounted in his autobiography that Brigham continued to surprise crowds as “his appearance was not very prepossessing, and nobody suspected him of being anything but the most ordinary kind of a plug.” McMurry’s rendition remedies any physical shortcomings Brigham may have had, memorializing him with heroic proportions.