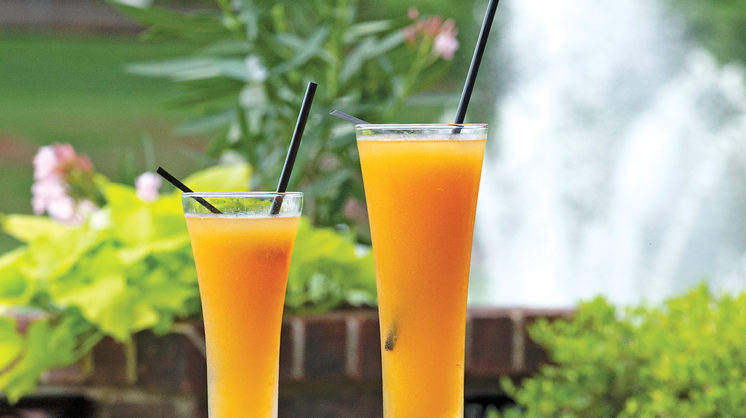 Look, let’s not mince words: It’s hot. Around this time of year, Oklahoma finds itself flirting with or reaching triple digits regularly, and that means the occasional cool, refreshing beverage is more apt than usual to hit the spot. Fortunately, those in search of some liquid satisfaction need only remember one name. The Bellini found at Bellini’s, 6305 Waterford at the corner of NW 63rd and Penn, is a light orange in color, but as a summertime thirst-quencher, it’s solid gold.

The classic version of the cocktail – invented in Venice sometime around the second World War – is peach puree and prosecco; Bellini’s signature variation adds a little white rum for extra oomph. Without going into specific proportions, owner Diana Buthion says it contains “a luxurious amount of alcohol.” And perhaps most importantly for the current environmental conditions, it’s served frozen, a flute filled with frosty goodness and crowned with a rum-soaked maraschino cherry. By the way, the cocktail originally was named for the Renaissance artist, but it’s a happy coincidence that “bellini” could be roughly translated to a little beautiful thing. It certainly applies to this chilly concoction.

And while several of the metro’s more sun-soaked patios aren’t likely to have many lingerers this month, Bellini’s peaceful backyard arbor remains a pleasure, especially when a breeze drifts past from the Waterford’s fountains. Just keep your beverage to yourself; Arthur is gregarious, but he’s under 21, and also a goose. Humans, though? With a Bellini in hand, your summer can be made in the shade.