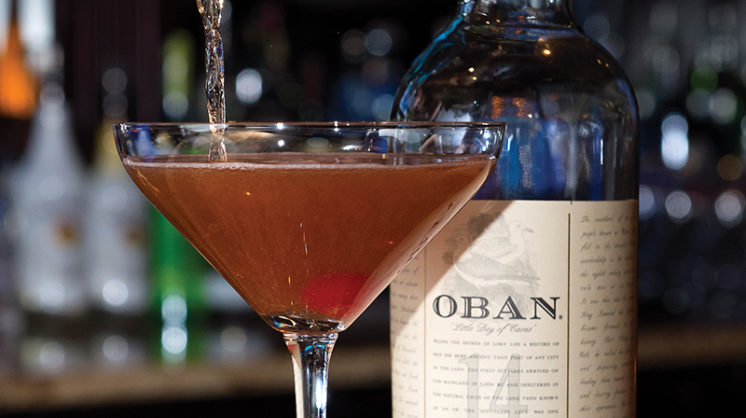 Many a long year ago – full three centuries, in truth – in the green hills of Scotland near Loch Lomond, there lived and died a man named Robert Roy MacGregor of the clan MacGregor. He fought the English throne on behalf of the House of Stuart during the Jacobite uprising, he traded and sold protection for and generally scrapped over cattle, he gained a reputation as a leader and a rogue and a folk hero.

What does he have to do with us, many lifetimes later and half a world away? His legend persisted over the years between, and to mark the premiere of an opera about him in the late 19th century, a New York bartender whipped up a variation on the Manhattan that became a classic in its own right. The Rob Roy keeps the sweet vermouth, dash of bitters and maraschino cherry garnish, but upholds the lineage of its namesake by replacing the Manhattan’s rye with the smoky bite of Scotch whisky.

Even if you’ve nary a drop of Scottish blood in your veins, Oklahoma’s a fine place to toast this larger-than-life figure of legend – this is cattle country, after all – and Opus Prime Steakhouse makes an uncommon fine rendition of this classic cocktail. You don’t even have to have it as the prelude or accompaniment to a meal, although it would be a shame to miss out on the prospect of a filet mignon cut from wagyu beef.

No less a Scots hero than Robert Burns opined that “Freedom an’ whisky gang thegither,” so order a dram and enjoy.