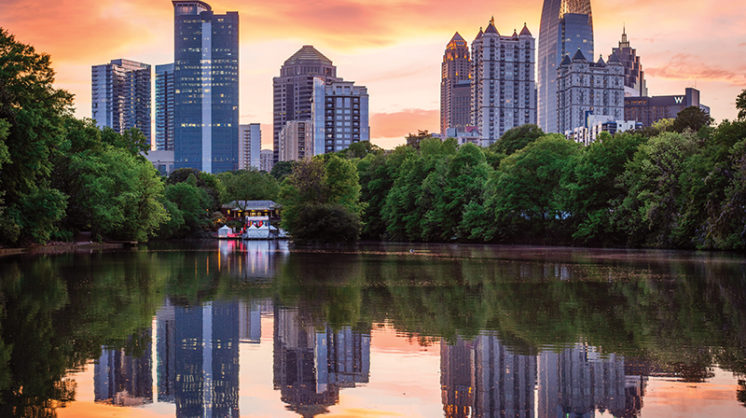 The Atlanta of “Gone with the Wind” is gone with the wind. Today’s Atlanta is a vibrant metropolis with a great economic outlook, historic and entertainment attractions, an exciting food scene and innovative reinvention of older areas of town. A nonstop flight from Oklahoma City, it’s the perfect escape for a great weekend getaway.

My purpose was to see my grandson Calvin, who was finishing a Master’s degree at Georgia State. In his two years living there, he’d been dependent on public transportation, Uber and the kindness of friends, so he had seen some of the sights. I was there to complete his education.

Our first outing was a Segway tour with ATL-Cruzers, a fast, fun way to see a bit of the city. We covered seven and a half miles in two and a half hours. We stopped for photo ops as we rolled past landmarks such as the Georgia Aquarium, World of Coca-Cola, Margaret Mitchell’s house, the High Museum and the Federal Reserve Bank. We cruised through Ansley Park, an early 20th-century residential area now on the National Register of Historic Places, and into Piedmont Park, also on the NRHP, a beautiful green space used in 1895 for an international exposition.

Every Segway company gives preliminary instruction, but ATL-Cruzers did the best job of any I’ve tried. If you’re leery about a Segway adventure, they also offer a 90-minute, 15-mile electric car tour. I’ve done them both and highly recommend them as great introductions to the city.

The two big do-not-miss spots for history buffs are the Jimmy Carter Presidential Library and the Martin Luther King Jr. National Historic Site. The Carter Museum is like the man: unassuming. Exhibits cover his life, military and public service and humanitarian efforts he’s undertaken in retirement. Of all the presidential museums I’ve seen – eight of 13 – I believe this one has the smallest display of lavish gifts given to the president, perhaps another mark of humility. Of course, one of its most precious exhibits is the Nobel Peace Prize awarded to the former president in 2002.

The Martin Luther King Jr. National Historic Site encompasses several structures. Start in the Visitors Center with exhibits and films on King and the history of the Civil Rights Movement. Then take a self-guided tour of Ebenezer Baptist Church, where both King and his father were preachers, or insight-filled guided tours of his birthplace and childhood home. The crypts of Martin Luther King Jr. and his wife Coretta Scott King stand on an island in a pool in front of the King Center for Nonviolent Social Change. An eternal flame burns nearby. 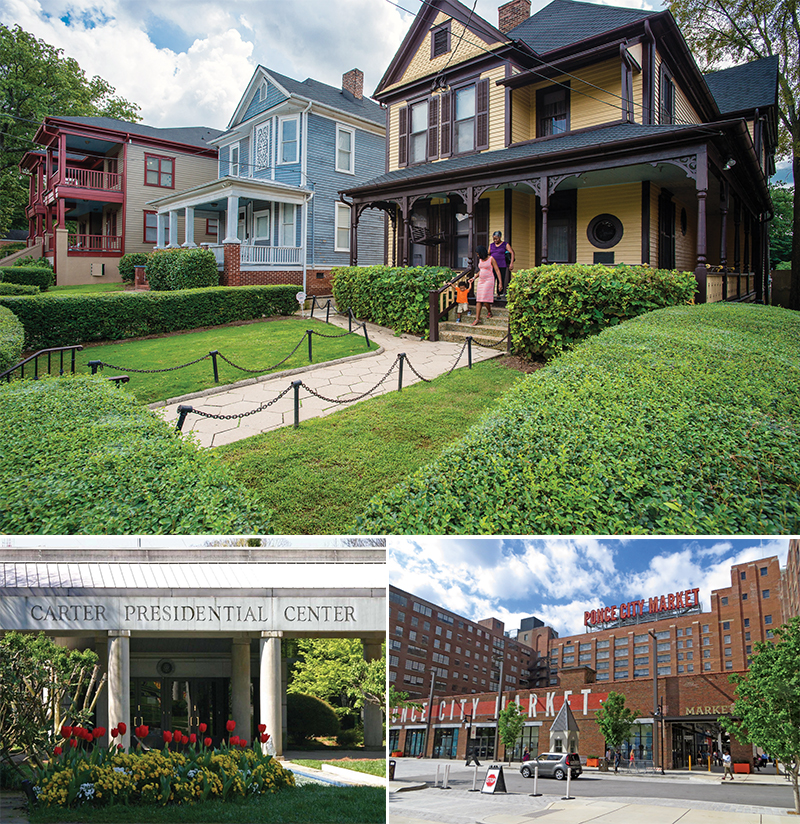 Scarlett would have a fine time in Atlanta today, and turnips would not be involved. Atlanta has it all, from chocolate sea salt Popsicles at King of Pops to elegant dining. Our quick trip was heavy on the Popsicles.

During our Segway tour, guide Laura Castelli pointed out a number of popular eateries, but one in particular caught our attention: Cypress Street Pint and Plate, a favorite stop boasting a big outdoor patio and big burgers.

One of their signatures is the Sublime Doughnut Burger – a creation featuring a half-pound Angus patty topped with cheddar, caramelized onions and applewood-smoked bacon between two Sublime glazed doughnuts. (Sublime Doughnuts, Atlanta, produces the crème de la cruller of doughnuts!) Yes, we had one … and it was delicious. The only problem was getting it into our mouths.

Atlantans are geniuses at repurposing old buildings. Krog Street Market was a warehouse in the 1920s. Now it’s a hip and happening mart with a variety of vendors and restaurants. One of the most superior is Superica – owner/chef Ford Fry and chef Kevin Maxey are a couple of good ol’ Texas boys who really know their frijoles. Their Mex-Tex menu promises and delivers the goods.

The largest redevelopment project is Ponce City Market. The 2 million-square-foot space opened in the ’20s as the world’s largest Sears Roebuck store. Today it’s a popular mall with super food selections, interesting shops, residential and office space. This was where we got our first Popsicle fix. We probably spent as much time eating as sight-seeing; Atlanta is great for both. 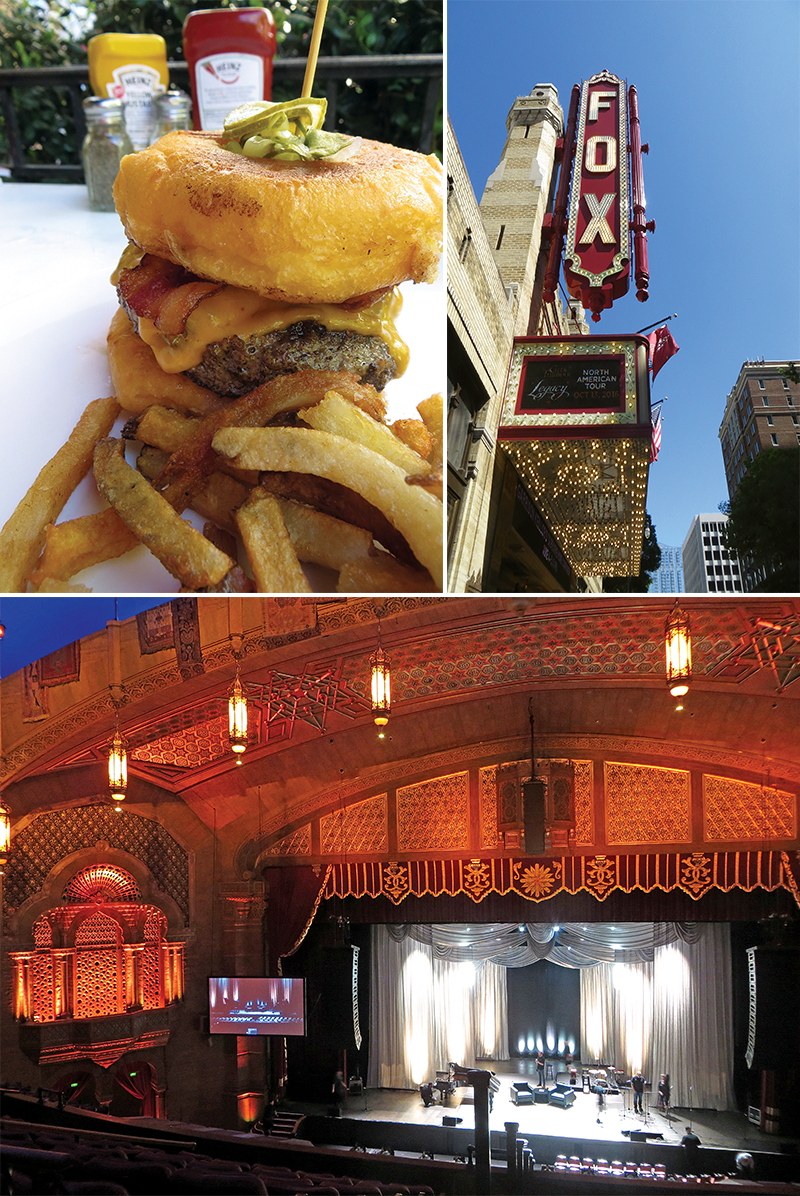 We barely scratched the surface of Atlanta offerings in this quick visit, but there was one last stop I wanted to make – the Fabulous Fox Theatre. I love movie palaces, and this is probably the most palatial I’ve ever visited.

Originally built as headquarters for Atlanta Shriners, the group began construction in 1928, but their plans were so grand they ran out of money and had to sell the building to movie mogul and theater owner William Fox. The building is a fantastic pastiche of Arabian nights and Egyptian temples. Sitting in the main auditorium is like being in the courtyard of an exotic palace. The sky overhead is a deep blue dotted with stars. Persian carpets draped over the parapets hide speakers. The custom-made Moller pipe organ is the second largest in the world. A tour of this magnificent structure is definitely worth the time and money.

You can have a great time in Atlanta in a short time. But why settle for an appetizer? There’s a whole menu of entertainment to be had in this great southern city.