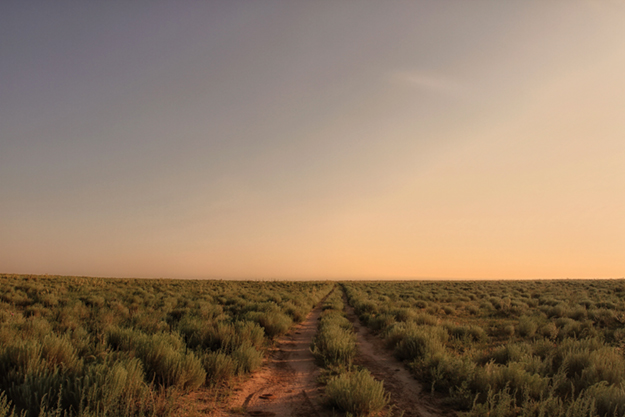 Imagine That Route 66 Was Reclaimed By The Prairie, And That I-40 Ran Not Parallel With The Old Highway But Instead Had Been Built Miles Away. Aside from the occasional rut, imagine there was no evidence that the road had once been the busiest route of its day. Imagine there was only one vestige of the travelers who had come before: the grafittied names of those who had passed by.

That is the tale of Autograph Rock, on the northwestern edge of the Oklahoma Panhandle. The names carved into its surface are the only clue this corner of Cimarron County was once a key stop on the famed Santa Fe Trail, which snaked nearly 900 miles from Franklin, Missouri, to Santa Fe, capital of the northern Mexican provinces. From 1821 to 1880, when the tracks were completed on the Atchison, Topeka and Santa Fe Railway, the trail was the gateway to the American West.

Today, the sandstone slab – about 20 feet tall and 700 feet long – bears the names of more than 300 pioneers, soldiers, traders, gold-seekers and adventurers from the Santa Fe Trail. Hundreds of additional inscriptions have been found around Cold Spring Creek and nearby at the lesser-known Signature Rock. 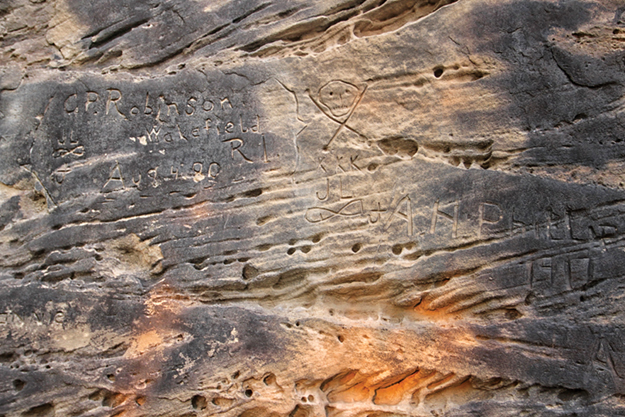 The Santa Fe Trail was cobbled together in 1821 by William Alexander Becknell of Missouri, who had been jailed for debt and released on bond with a deadline to pay what he owed. The Virginia-born son of an American Revolutionary War veteran, a determined Becknell set out with a party of six and enough mules to haul $300 in goods. He arrived in trade-hungry Santa Fe in 77 days, just after Mexico had won its independence from Spain, and headed back to Missouri with $6,000 in silver coins from buyers so eager for goods they would pay $3 for a yard of calico.

Bucknell’s second trip used a shorter route – which came to be called the Cimarron Cutoff – and took 48 days, earning $91,000 from $3,000 worth of goods. The shortcut shaved 200 miles and 10 days off the longer mountain crossing through Colorado’s Raton pass. The trade off: fewer water sources and more attacks from Indians unhappy by continued encroachment on their territory. Over time, however, the Cimarron Cutoff would carry three out of four Santa Fe travelers. All of them would pause for a drink or a rest at the natural springs and sandstone ledges of Autograph Rock. 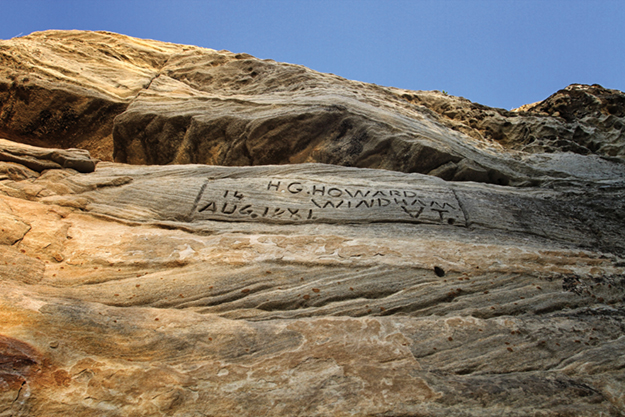 Tens of thousands made the trek. Kit Carson, who operated Fort Nichols outside modern-day Wheeless in the year after the Civil War, liked to wait until 500 wagons had arrived at the Rock before he allowed them to continue, four abreast, as protection against Comanche and Kiowa raids. The caravans would stretch across the frontier, sometimes in lines more than three miles long.

While resting and waiting, some travelers scratched their mark into the soft sandstone. In addition to names and initials, there are crosses, hearts, a five-pointed star, cattle brands, a double-pointed arrow, a reference to the American Expeditionary Force, Masonic and Odd Fellow emblems and an elaborate carving left unfinished. Some of the names belong to characters well known in their day. Most of the stories, however, are lost to time. 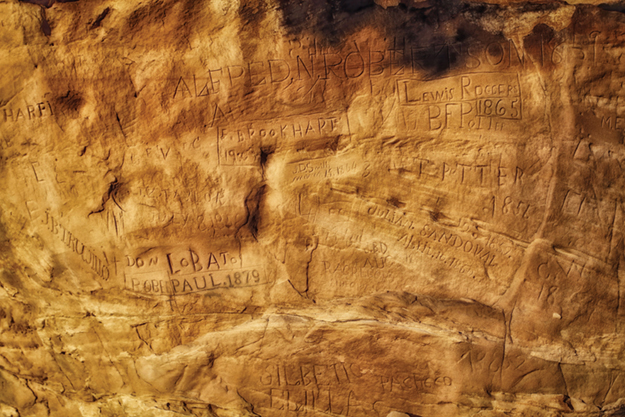 Today, about 2,000 people each year travel the long, windy road on the Sharp family ranch to the site. Admission is free, but visitors must pass muster at the Cimarron Heritage Center & Museum in Boise City to be entrusted with directions.

They see that the very softness that made the ancient stone so appealing to carvers has led to the fading of many inscriptions. Nearly two centuries of erosion from sun and rain and wind and ice have erased the oldest etchings. Some are already unreadable.

It is easy to imagine a time when the curious might pay a pilgrimage to this remote outcropping, its surface worn smooth and inscriptions long melted into oblivion, and wonder how in the world it ever became known as Autograph Rock.