Back to the Broncho Theater - 405 Magazine 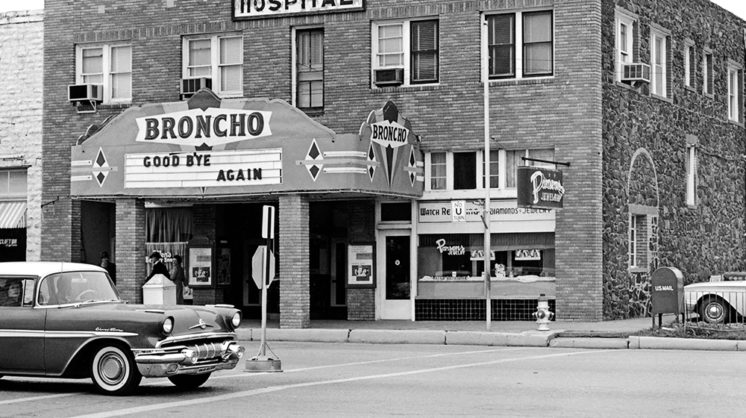 Long before the days of immense, multi-screen theaters with IMAX and ear-blasting surround sound, the local movie house was the place to go for a night on the town – or a Saturday morning with your friends.

Most every community of a certain size had a theater, including what was then the sleepy little town of Edmond. You see, before the sprawling mass of shopping centers, restaurants and auto dealers it is today, Edmond was a tiny little burg home to mom-and-pop shops and a quaint downtown district.

At the corner of Main and Broadway, the Spearman Building was home to a unique combination of businesses: Downstairs was the Broncho Theater, where patrons saw everything from Elizabeth Taylor and Richard Burton in Who’s Afraid of Virginia Woolf? to the shoot-em-up Bonnie and Clyde with Warren Beatty and Faye Dunaway. But upstairs, the scent of fresh buttered popcorn gave way to the stench of antiseptic at what was then Edmond Hospital.

“I remember, in the early ’60s, riding my bike to the theater on Saturday morning to catch the latest western,” says Edmond attorney Barry Rice. “Sometimes we would line all the way up to McCall’s, waiting to get in and pay our 15 cents.”

Rice grew up in Edmond, graduating from the University of Central Oklahoma and then earning his law degree at Oklahoma City University. Like his parents and grandparents before him, he and his wife Arleather raised their family in Edmond.

“Back in the day, my friend Steve Gibson and I used to go to movies at the Broncho,” he says. “Steve’s dad, Hoot, was the proprietor of McCall’s, an upscale men’s clothier just down the block from the Spearman Building. It wasn’t unusual to see a line of kids waiting to get in.”

The Spearman Building was built in 1935, and the Broncho Theater’s first show was held on Jan. 10, 1936. By 1947, the building’s second floor became home to Edmond Hospital, and a generation of baby boomers was born there.

“Not only did I go to the movies in that building, I was also born upstairs in there in 1953,” Rice recalls. “As I grew older, I remember in junior high school going on dates to the movies. It was a fun time in my life. Popcorn was something like a nickel, and a Coke cost about a dime.”

Named after the University of Central Oklahoma (then Central State College) mascot, the Broncho Theater operated until the 1970s, when other larger screens began popping up, including the old Edmond Plaza Theater at 15th and Broadway.

The hospital closed in 1967 when a new, state-of-the-art, 35-bed hospital opened at Second and Bryant.

Eventually, the interior was renovated as a restaurant space, where Garfield’s opened in the mid-1980s. Today the scent of simmering garlic wafts over downtown Edmond from the comfortably posh Othello’s Italian eatery.

“Edmond has grown and changed a lot,” Rice says. “And those of us who grew up here have some fond memories of the way it used to be. My law office is just down the street from the Spearman Building, and remembering the days of the Broncho Theater always brings a smile.”