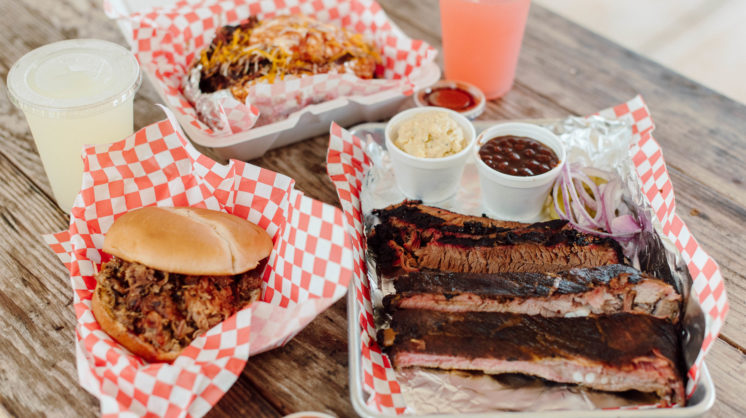 To reduce barbecue to its component parts is simple: It’s smoked meat served with sauces, accompanied by carb-laden side dishes and, depending on what kind of joint you’re in, greens, pickles, white bread and/or coleslaw. That summation of its parts doesn’t really account for the near cult following it has, though. At some places, including The Butcher BBQ Stand in Wellston, people will wait in line for hours for smoked meat, fully aware that the restaurant could sell out before they reach the register.

Regular customers at The Butcher BBQ Stand refer to the burnt ends (the ends of the smoked brisket) as “meat candy,” and that holds some hint as to why people are willing to drive hundreds of miles to stand in line for beef, pork and turkey. Barbecue done right presents those proteins in ways that combine all of our tasting arsenal: sweet, smoky, umami, bitter, salty, spicy, aromas and yes, emotional responses. It makes our mouths happy, and it makes our brains happy. 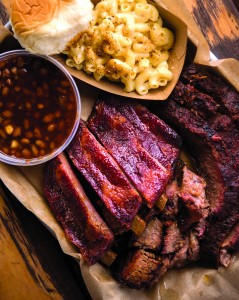 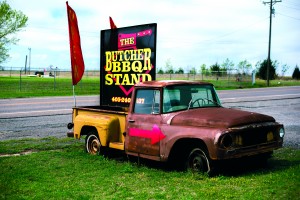 The rubs and sauces do make a difference, of course, but there is a comfortable sameness to barbecue that assures us we know what we’re getting when we walk into a shiny new place, such as Clark Crew BBQ – one of the absolute stars of Oklahoma’s scene – or to an established, comparatively dive-y joint like Leo’s, where the building itself tells us we’re in good hands because no one who has labored this long could have labored in vain.

Equally obviously, that sameness does not mean the quality or skills are the same, but rather than pick “the best” barbecue in Oklahoma (that’s the task of competitions with blind, unbiased judging), we are focusing on what places do well, how an underappreciated protein ended up being pronounced all wrong, and the lure of barbecue to entrepreneurs looking for a second career.

Travis Clark and his team have earned more than 650 Top 10 finishes in competitions, including the Jack Daniel’s World Championship Invitational, the holy grail of barbecue awards. He’s won best sauce, best beans, best brisket, team of the year, etc. To borrow a sports analogy: he’s barbecue’s Tom Brady and the New England Patriots, minus the cheating.

Clark’s Clark Crew BBQ opened at 3510 NW Expressway shortly before the COVID-19 shutdown, but it had been open long enough to realize the numbers the proprietors had expected weren’t optimistic enough. People could not even find parking in a spacious lot, and the line to get in would have filled another restaurant entirely. What’s the draw?

Across the board, Travis Clark is focused on perfecting every component of the meal. The cornbread should be called corncake, and if you drizzled a little glaze on it, you’d have dessert. The beans are world champions, so are the sauces, and even the fried pickles are like no other fried pickle in the world – they’re thick and sweet, with just enough acid to cut the sweetness.

“I like to do things a little differently than people expect,” Clark says. “Building layers of flavor is the key, especially to sides.”

His potato salad is mustard and mayo, so you get tangy, creamy and zippy, all in one bite. Clark swears by Duke’s Mayonnaise, and uses it with mustard and vinegar in his inexplicably good coleslaw. Contrasts and surprises lurk in nearly everything you taste at Clark Crew. And, again, we’re just talking about smoked meat, but the texture, moisture, flavor and consistency of his proteins are spectacular.

This chapter in Clark’s life has been a pleasant surprise. The jump from master on the competition circuit to owner of even a small hospitality enterprise – to say nothing of the massive scale of Clark Crew – has ended the restaurateur dream of many a barbecue expert, but Travis Clark is nothing if not a tireless worker and avid learner. His hours now are brutal: 8 a.m. to 11 p.m. or later some nights. He knows it can’t continue indefinitely, but the lessons are still being learned, and he’s captivated by something he never expected.

“When you’re cooking on the competition circuit, you hand a box full of food to a runner, who takes it somewhere else and puts it in a line to be judged,” he says. “You never see anyone eat your food.”

As he talks, goose bumps spring up on his arms, a visceral response to what he’s saying. “I never knew I missed that part of cooking until we started this,” he continues, gesturing at the main dining room. “I get to watch people roll their eyes like it’s the best thing they’ve tasted; watch them smile, share and enjoy the food. I love it, and that’s what it’s really about.” 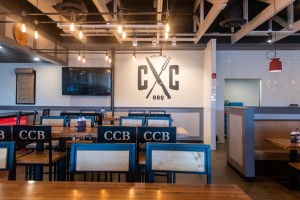 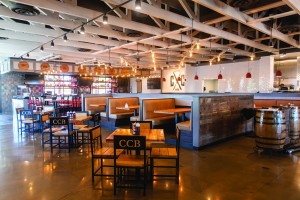 Like so many other pit masters turned restaurateurs, Travis Clark came to barbecue after a first career. He was an electrician; Owen Wilson was a high school football coach and teacher for 20 years. After retiring in 2018, friends and family for whom he’d cooked encouraged him to think about a food truck. Big O’s became a popular destination for fans of food trucks and barbecue.

“I started with brisket, ribs, pulled pork, loaded baked potato and loaded nachos,” Wilson says. “The business took off, so much that I was able to start thinking about a brick and mortar.”

Big O’s Pork & Dreams is located at 285 S Santa Fe in Edmond, very close to where Owens coached for two decades. In addition to the restaurant, he caters, and of the transition to a fixed location he says, “Basically, it’s the same work; I just cook more.”

Along the way, the patience that comes from recognizing how long it took to get good at the first career provides context and perspective for mastering the pit. The process matters; time matters; patience matters.

“Some people walk into the restaurant and we may be out of something,” Wilson says. “They look surprised, and then ask if I can’t just whip them up some ribs or pulled pork. I’d like to say, ‘I’m sorry, but you’re in the wrong building,’ when they do that, but I can’t. Those things have to marinate. It takes as much time as it takes.”

It’s a City in Italy, not Baloney

Sometimes barbecue is the second act in a different way; it’s added to something else, often to great effect. Jamil’s Steakhouse at 4910 N Lincoln is, in the words of owner Greg Gawey, a dying breed. It’s a Lebanese steakhouse, but Jamil’s combines three things in a combination born of happenstance.

In the 1950s, the original Jamil was working in the oil business in Creek County. When the boom busted, as they do with some regularity, he opened a restaurant. “The only other thing he knew how to do was cook,” Gawey says of his late uncle. “He knew tabouli and cabbage rolls, and he could make steak, and because he already knew how to make ribs, he added ribs.”

A Lebanese steakhouse was born in Tulsa in 1954, and the OKC version opened in 1964. In the mid-1990s, Gawey added lunch to his operation in the metro. That’s how bologna ended up on the menu, and it remains a fixture.

“Sometimes it’s hard to be a steakhouse that serves prime steaks and hear people say bologna is the best thing on the menu,” Gawey says, with a laugh.

The bologna is made by a company in Oklahoma according to Gawey’s special recipe: a blend of beef and pork with a proprietary assortment of seasoning. And no, he won’t say what it is. Nor will Travis Clark, and he uses the same process – contracting with a processor to make it to his specifications.

Both Jamil’s and Clark Crew achieve the gold standard for bologna: a fine grind without graininess or grittiness in the meat. Jamil’s smokes its bologna over pecan wood, which gives it a slight sweetness and a less heavy-handed smokiness. As part of its smoked bologna and jalapeño-pimiento cheese sandwich, this delicacy makes for a must-try lunch in OKC, especially if you get there early enough to get an order of the steak fries. Hint.

Finally, while a few places do everything really well, we thought it would be more fun to build a spread from some of the best things we had around central Oklahoma. This is not to say that what’s listed is the only thing a concept does well, only that we really liked what we chose for this part.

Back Door Barbecue, 315 NW 23rd. Get the Beastwich. It doesn’t matter what’s on it; get it, and potato salad.
Bedlam BBQ, 610 NE 50th. Smoked chicken with cowboy beans and corn on the cob.
Big O’s Pork and Dreams, 285 S Santa Fe, Edmond. Juicy, smoky, wonderful turkey.
Butcher BBQ Stand, 3402 OK-66, Wellston. Burnt ends. No question. Worth the drive to Wellston if you only get one.

Clark Crew BBQ, 3510 NW Expressway. Brisket. It’s prime, and it’s beautiful. Don’t leave without trying the beans, though.
Cornish Smokehouse, 801 SW 119th. Spicy sauce. It’s actually spicy, and along with Roy’s Bar-B-Q in Chickasha, the best slow heat we had.
Earl’s Rib Palace, 6 locations, earlsribpalace.com. Deviled eggs are a staple at several joints, but Earl’s nails them every time.
George’s Happy Hog, 712 Culbertson. Easily the best greens we had anywhere, but they’re just a side, so get the rib tips, too.
Iron Star Urban Barbecue, 3700 N Shartel. The sausage trio is one of the best lunches in the metro, especially the black pepper smoked sausage, and get the corn pudding with it.
Jamil’s Steakhouse, 4910 N Lincoln. As stated elsewhere, you need the bologna sandwich with pimiento cheese.
Leo’s BBQ, 3631 N Kelley. The pork ribs are what everyone goes there for, but get a hot link, too.
Ray’s Smokehouse BBQ, 1514 W Lindsey, Norman. Pulled chicken with fried okra. Good food that deserves more recognition.
Roy’s Bar-B-Q, 309 W Missouri, Chickasha. Best coleslaw hands down. Sweet, tangy, peppery, crisp and delicious.
Swadley’s Bar-B-Q, 5 locations, swadleys.com. Pulled pork, and you might as well add it to the loaded baked potato. We recommend the spicy sauce.

A note on cornbread: everyone likes something different, so we recommend Clark Crew and George’s Happy Hog for the “cakey” type, and Iron Star for more traditional tastes.