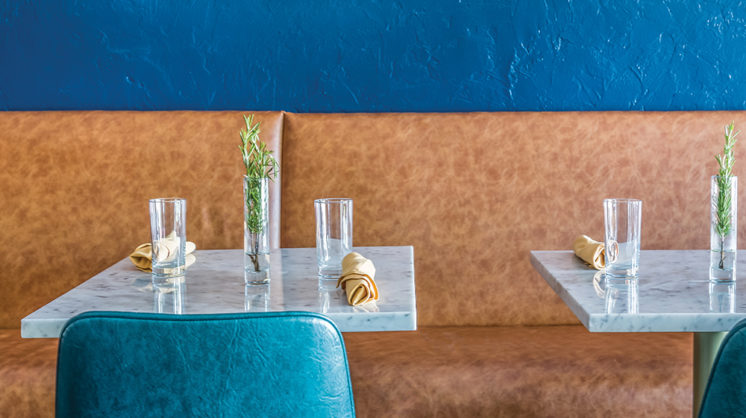 In terms of form following function, the banquette is the perfect example of what happens when talented designers are turned loose on a feature that works primarily because it makes sense within the layout and purpose of the space. But design does matter.

Banquettes first started appearing in American homes in the early 20th century. As family meals moved from the formal dining room to the kitchen, a full-size table with chairs did not make as much spatial sense as it had. Booths, which are technically banquettes, saved space, and depending on construction, were typically more comfortable than chairs.

With the explosive growth of American diners, booths were an obvious way to maximize seating and break up the monotony of a dining room. However, not all dining areas are created alike, and some spaces do better with a linear banquette than a cluster of back-to-back booths.

Crosby Dyke, a co-owner at En Croute in Nichols Hills Plaza, utilized a linear banquette because it maximized the available space. “When I saw the room, I realized it’s a shotgun bistro, so the banquette makes better sense given the layout of the room,” she says. “It helps that it’s also eye-catching.”

Restaurant owners around the metro were unified in their reasons for incorporating banquettes into their design concepts, and the three most common responses were better use of space, flexibility in seating and comfort – which was often described synonymously as “cozy.”

Aimee Ahpeatone is a partner in two popular concepts – Iguana Mexican Grill and The Pritchard – that utilize banquettes. Like many concepts she develops with business partner Steve Mason, both restaurants were revitalizations of existing spaces.

“Those kinds of buildings can be very sterile,” Ahpeatone says, “and sound can be a problem in all the brick and stone. A big, cloth banquette acts as a sound barrier or muffler, in addition to all the other good reasons to choose one.” 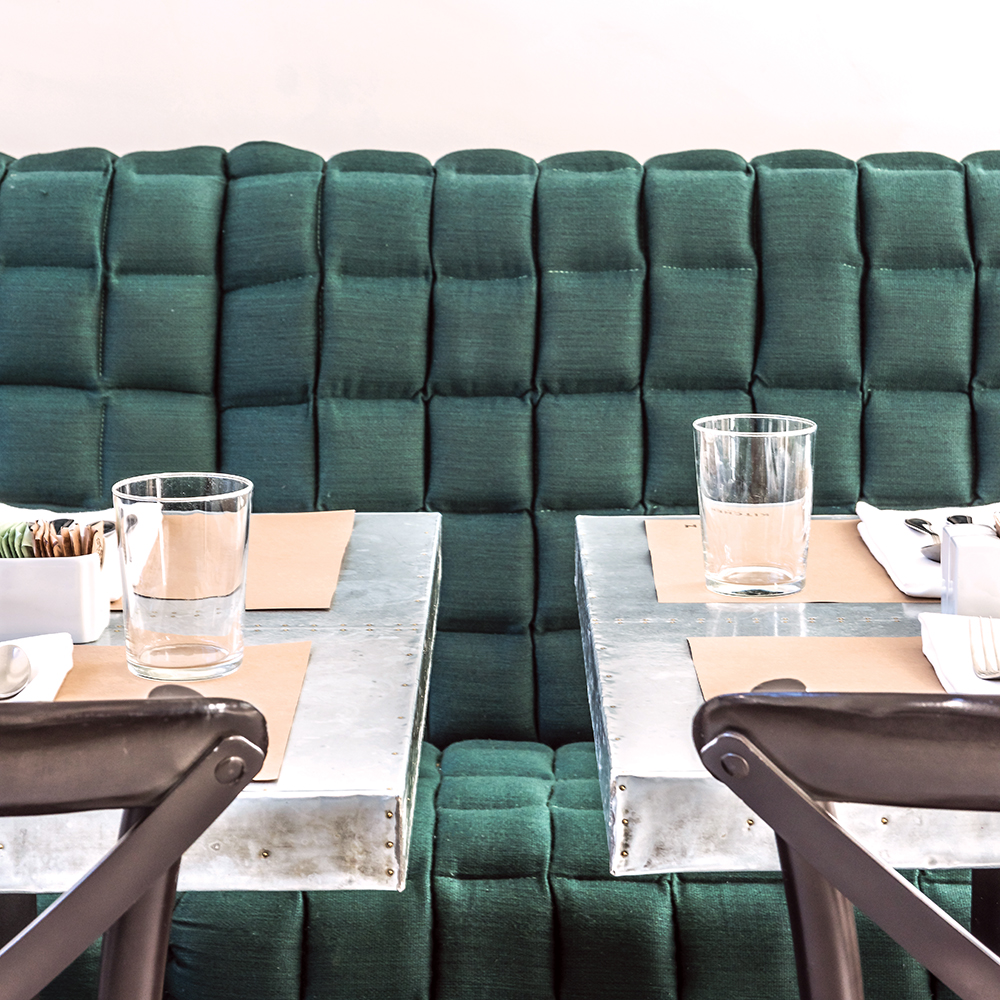 Ahpeatone said that she believes women prefer the cozy bench side of the banquette over the chair side, a generalization that other restaurateurs affirmed.

“Absolutely,” agrees Heather Paul, co-owner and co-founder of A Good Egg Dining Group. “It’s a generalization, but I find it to be true. But in the restaurant business, we find that people tend to divide over seating all the time: some love high-top tables, and some hate them; some sit on the bench side, and some love the chairs.”

Paul recently finished a small remodel at Kitchen No. 324, the company’s popular downtown breakfast, brunch and lunch concept that is seeing expanding dinner customers. As part of that remodel, the emerald green fabric on the banquette had to be color matched to cover new banquette seating in the front of the restaurant. Paul, like many restaurateurs in Oklahoma, turned to Laura Batchelor at Total Restaurant Interiors to do the color matching.

“Working with Heather is always a pleasure, because she has an amazing eye for the details,” Batchelor says. “She knows design, and she’s always aware of what’s happening in the design world. She knows what she wants, and there is nothing half-assed about what she does.”

That includes the biscuit tufting on the banquette at 324. Batchelor called it the next big trend, but Paul had adopted it a few years before anyone else in Oklahoma City. Working with clients such as Paul is an exception, and often Batchelor works with designers, as she did at Iguana Mexican Grill.

“Sara Kate (Little) of Sara Kate Studios did the interior design at Iguana,” Ahpeatone says, “and as part of that, she found these beautiful blankets from Bolivia. We wanted to incorporate them into the banquette, and they worked beautifully.” 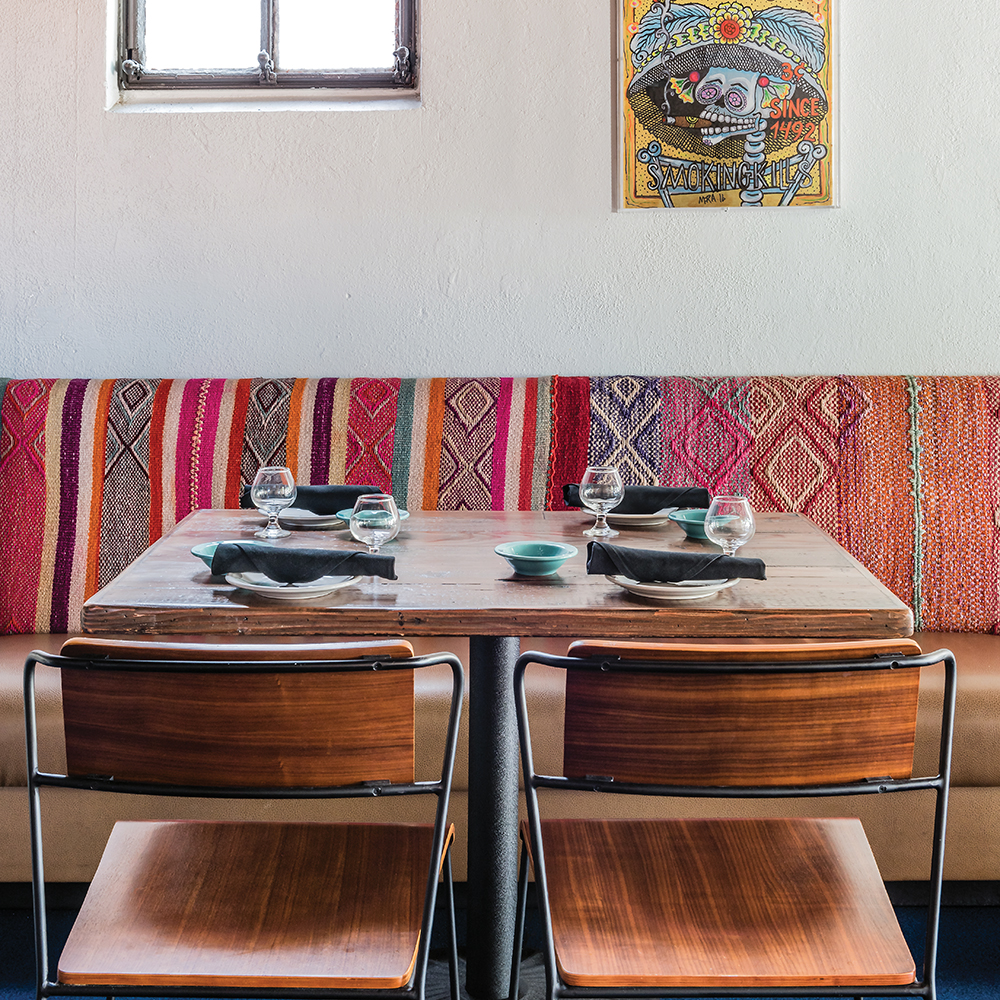 Batchelor said she often gets designs sketched on a cocktail napkin, from which she’s expected to design a whole restaurant’s décor — so working with Sara Kate made the whole project easier.

“The blankets were beautiful, but they weren’t uniform like you’d get with mass-produced items,” Batchelor says. “She brought them by the shop and we laid them out over the banquette frame to see how they would look. Sara Kate decided that if they were too far off in terms of color, she would use the outliers for pillows. It really worked well.”

Because they are part of a restaurant operation, form has to follow function, so most of the banquettes are made with vinyl. Crosby Dyke said that makes cleaning so much easier. “I actually have some vinyl cleaner my mom handed me,” she says. “She just gave it to me and said, ‘Use this.’ Because of the construction of the banquette, we can wipe it down easily.”

En Croute added outlets and USB ports to the bottom of their banquette, to make it easier for customers to work or charge their phones. At Iguana, Batchelor used leather for the bottom of the banquette, both to stay consistent with the design theme and to improve durability.

“When we look at the same space every day, it’s nice to look at something that is beautiful,” Dyke said, “and from our perspective behind the counter, the banquette is very pleasing to look at.”

As part of a thoughtful overall design, they’re very pleasing in quite a few ways.