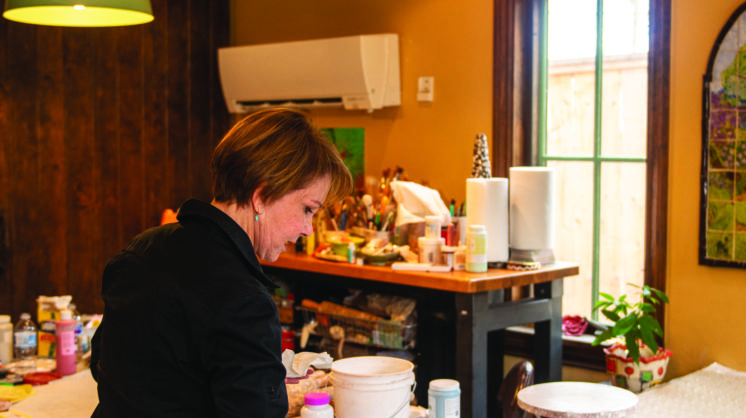 Elements of her artistry appear in every room of Suzi Swinford’s home. When she decided to redo the tile in her kitchen, she made every green-hued square on the backsplash and even tiled her copper range hood. On special occasions, she makes her grandchildren distinctive and wholly original ceramics that reflect their current interests. And when Swinford makes any kind of ceramic work, she never strives for symmetry: each piece in a series is unique.

In 2011, Swinford’s daughter was planning her wedding and asked if her mother could make serving pieces for the reception. That request opened up a new style for Swinford, who began finger-molding roses onto the sides of handmade bowls and other containers, and then glazing the pieces in brilliant white.

“The first piece I made was really wonky, but that’s what I’m all about. I like wonky stuff,” Swinford says. “I saw all of [Dale] Chihuly’s glass, and that became my inspiration.”

Her work dates back 34 years, when Swinford decided that store-bought dinnerware was not going to work in her home; she wanted to create her own plates. She bought greenware – clay creations that have been shaped but not yet fired – at House of Clay, the venerable pottery and ceramics store that has operated at 1100 NW 30th for more than half a century. Swinford painted the pieces and brought them in for firing, but eventually the proprietors proposed that she go for full self-sufficiency in her work.

“They suggested, ‘You should go take a clay-making class – you like this so much,’” Swinford says.

That love of ceramics and her innate creativity pushed Swinford through several phases and series of work, and examples of nearly every turn and twist of her artistic career can be found in both her Edgemere Heights home and the striking, Tuscan-style studio her husband John had built for her at the far end of their backyard. Inside the two-story workshop, Swinford keeps a high-end kiln at the ready, and nearly every surface is covered with bowls, trays, containers and tiles she created. These include several green-hued pieces with textured gold overlay, a design reminiscent of the lower-level detail in Austrian symbolist Gustav Klimt’s classic painting, “The Kiss.” 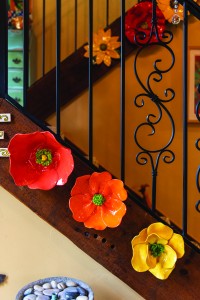 Swinford often creates such textures using grandmother lace or pressed paper patterns, placing the lace or paper on wet greenware to create depressions and relief on her objects. But beyond such devices, Swinford’s most important tools are her hands – specifically, her fingers. Each piece is formed manually. Groups of pieces will have the same color combinations or designs, but individual pieces have character. She was never particularly interested in using throwing wheels.

“I’m not big on the wheel throwing, because it’s too symmetrical for me,” Swinford says. “It’s hard to do that, but it’s just never been my thing. It’s so funny, because people who like me tell me that they feel my fingers in their pieces. And I think, ‘Well, that’s good, because they’re going to be there.’”

In her kitchen, Swinford picked up a bowl and, for comparison’s sake, held up one of its siblings in a set.

“I would 10 times rather have a bowl like this than a perfect bowl,” she says. “And I’ve got a set of them, but they certainly not all alike.”

On the first floor of her workshop – a floor made of two-foot terra cotta tiles, each of which she stained with its own individual pattern – Swinford keeps 25-pound blocks of raw clay in a variety of earth tone shades. Currently, she is working with mid-fire clay, which has a 4 to 6 cone level. 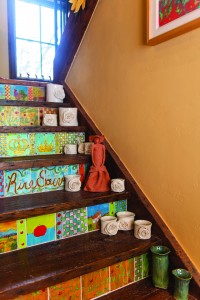 This is where the technical aspects of Swinford’s work come into play. A cone is a pyrometric measure of how much heat a clay can endure before it deforms inside a kiln. These are literally cones or, more specifically, clay pieces shaped like check marks with diagonal stems rising from a wider base. Rather than measure a kiln’s heat based on Fahrenheit degrees, ceramicists measure heat based on how cones react to that heat. If a cone deforms in such a way that it completely loses its shape and dimensions, the kiln is set too hot. A kiln with a proper adjustment for the clay being used will bend a cone in a perfect arc.

Swinford’s goal with each piece is for it to vitrify, so that all pores in the clay seal together and the piece is considered food-safe. When a piece achieves vitrification, it will not absorb food particles, with or without glaze, though Swinford glazes all her work so that there is never a question of whether a buyer could fill one of her bowls with soup and risk it seeping through the surface.

“I always glaze mine,” she says. “I just think there are too many things that could go wrong. That’s just a thing that I do.”

Many chapters of Swinford’s career are represented by the pieces in her studio. Vividly glazed ceramic flowers on her wall will likely never be made in quite the same way again; Swinford created them before lead-based glaze was taken off the market. Lead is responsible for the shine on the flowers, making these Swinford originals rare, irreplaceable pieces. 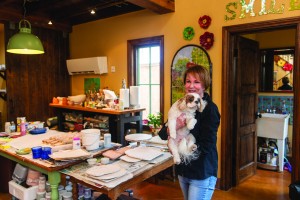 Still, she continues with other representations of nature, like a series of ceramic leaves she made using enormous sycamore leaves pressed into clay, and her bright studio – which is also a favorite sunning spot for Swinford’s constant companion, a cavalier spaniel named Ollie – features staircase tiles painted several years ago with sunflower designs.

Swinford is never sure how long it takes to make one of her ceramic pieces, though she said that each one spends a lot of time in her hands.

“It’s like those clay tiles,” Swinford says, referring to the hundreds of individual, copper-green tiles in her kitchen’s backsplash. “I’ve thought, ‘I’ve picked up this tile how many times?’”

If a piece has too much thick glaze that obscures the relief patterns, Swinford might be less proud of it, but even if it does not turn out like she envisioned it, the artist would rather flaunt the imperfection than call it a mistake. When she describes the creation of the white roses that adorn the pieces she started making when her daughter married, she does not speak of inconsistencies as if they were errors.

“The ideal way is to make little circles and gradually put it together, but it falls apart on me,” Swinford says. “So, I’ll take a strip of clay and just start going around and stick that on, and then I’ll go around it with another strip, then I’ll make a little hole (in the body of the piece) and stick it in there.”

Swinford pointed inside the piece, where she could still see a slight bump where the rose was pushed through the hole. But that bump is simply part of the character of her work.

“I could probably trim that off, but why?” she says. “I’ve been in workshops with people who, in a three-day workshop, they will get only one piece of work done. And I just think, really? I mean, who cares?”