Behind the Music City - 405 Magazine 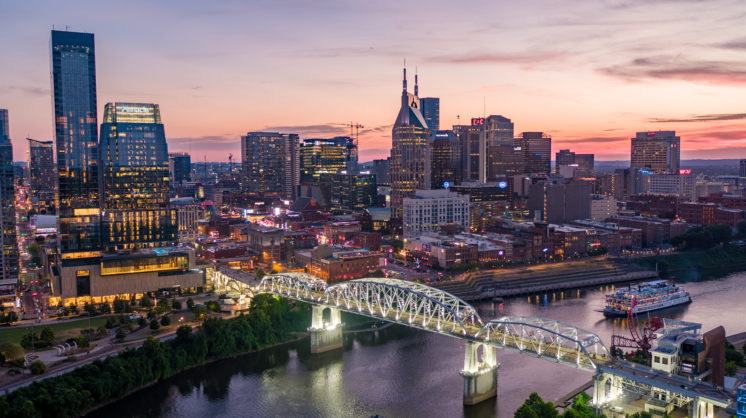 Enjoying Nashville with all the senses.

For too many people, Nashville’s story tends to begin and end with “Music City” references and discussions about how the flatbed party trucks (called barges by locals) are affecting downtown business along Music Row. The truth is, like many cities, there are many stories happening in Nashville, most of which have nothing to do with Music Row. Tucked into a bend of the Cumberland River, downtown Nashville is the heart of the city, but much of what is great about this city lies outside downtown. While it can be a sports destination — Vanderbilt Commodores, Tennessee Titans, Nashville Predators — it’s also an increasingly important food city thanks to Chef Maneet Chauhaun, Chef Sean Brock and a plethora of James Beard awards and nominations. Nashville is also home to art galleries, fascinating landmarks like the full-scale replica of the Parthenon, independent music creators … and yes, Goo Goo Clusters.

For one of the most spectacular views of the city, Nashville’s 21c Museum Hotel features rooftop suites and a bar that provide a stunning panorama of downtown and the Cumberland River. As with all 21cs, the hotel also features a large gallery space with a portion of the company’s modern art collection on display, as well as a modern American restaurant with excellent food at Gray & Dudley.

The newly opened Four Seasons offers a luxury experience of the city just a block from Broadway. Many of the rooms provide floor-to-ceiling windows with gorgeous views of downtown and the river, plus its location guarantees easy access to all the nightlife you want.

Chris Blair opened The Listening Room Cafe in 2006, and it’s since become one of the city’s top venues, with acclaimed singer-songwriters performing live music in a setting that includes delicious food and drinks. Nashville is a magnet city for musicians, songwriters and singers, with a much-deserved reputation for great music everywhere; The Listening Room is one of the main contributors to the culture.

Nashville used to be the place to stay if you were planning to visit the Jack Daniel’s Distillery in nearby Lynchburg — which is still a great idea — but now the city has its own collection of stellar distilleries, and Nelson’s Green Brier Distillery is a standout. The pre-Prohibition distillery is a family-owned operation that produces excellent whiskey and fantastic stories, thanks to Charlie Nelson. Tours and tastings are Monday through Friday.

The National Museum of African American Music opened in 2021 right on Broadway as a brilliant example of what a modern museum ought to be: interactive, truthful, informative and committed to a great mission. In this case, it’s the preservation of more than 50 genres and styles of music that were “created, influenced and/or inspired by African Americans.”

Where to Eat (and Drink)

Located in the historic Germantown neighborhood, Chef Julia Sullivan’s oyster bar and vegetable-forward concept Henrietta Red isn’t a vegetarian restaurant, but it does take vegetables seriously, making them the star of several dishes. The food, like the interior, is simple, lovely and fresh. The bar turns out excellent craft and classic cocktails in a casual setting.

If you’re going to try Nashville hot chicken, Aqui Hines’ 400 Degrees might be the best introduction. Fans of deep-fat-fried chicken will love the restaurant’s emphasis on fried, not just hot, chicken, but the warning is in the name. If you order the hottest level, remember: You asked for it.

Peninsula is a small spot — under 40 seats — but if you can get a reservation, you’ll be treated to delicious specialties from the Iberian Peninsula, including octopus, Spanish toast and stellar vegetable-forward dishes. It’s not an easy reservation to get, so call well in advance of your trip.