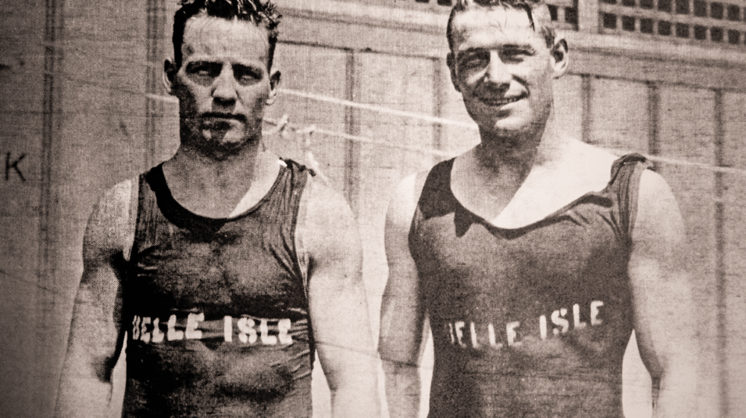 There’s nothing quite like a refreshing dip in the pool on a hot summer day. A century ago – long before White Water Bay – Oklahoma City residents flocked to the ever-popular Belle Isle Lake and amusement park.

“It offered a break for the hard-working class in Oklahoma City in the early 20th century,” says David Riesenberg, partner and owner of Belle Isle Restaurant and Brewery in 50 Penn Place. “Belle Isle Lake and amusement park offered swimming, dancing, a beer garden, boating and fishing, as well as a carousel and other rides. It was a big difference from what we need to entertain us today.”

The lake offered picnic areas, sandy beaches and, of course, swimming. A dance pavilion was built on the island, and “Honeymoon Bridge” became a favorite place for young couples on warm summer evenings. The Great Houdini appeared one Fourth of July, and thousands of people attended his show.

By the 1930s, Oklahoma Railway sold the entire site to OG&E, which built a new power plant. The amusement park closed, the carousel burned and the glorious Belle Isle site faded into memory.

Today, Riesenberg helps keep the memories alive. His restaurant and brew pub, which opened in the summer of 1995, is furnished with photos and mementos from the bygone era.

“When we decided to put a brewery in 50 Penn Place, we struggled for a name,” Riesenberg says. “After many attempts and a lot of research, we decided on the name ‘Belle Isle’ and used the old Belle Isle theme. The lights hanging over the tables are old lights from the power plant that we had rewired. We have two old trolley control boxes, and of course, all the old pictures hanging on the walls remind our customers of what was on this site a century ago.”

The restaurant and pub is open six days a week, and features steaks, burgers and salads.

“Our menu has evolved over the past 23 years,” Riesenberg says. “We have added some south-of-the-border favorites, and a heavy bar food appetizer section.

Our most popular item is our brick oven pizza. We also brew our craft beers right on the premises, and we have other domestic and import beers, as well as liquor and wine. We also have a patio for al fresco dining on the lower level.

“The lake and park may be long gone,” he adds, “but we are doing our part to keep the memory alive for a new generation.”