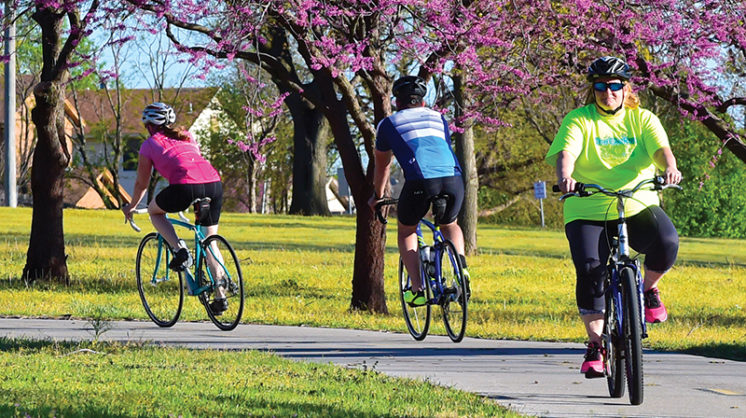 Ours used to be a community built for cars. Its 5,000 miles of streets and its sparse patchwork of sidewalks set a menacing tone for anyone without four wheels and an engine.

But health and fitness are taking on greater importance in Oklahoma City’s culture, and City Hall has been leading the charge – encouraging residents to walk, run and pedal their way to a better quality of life.

It started near the elephant exhibit at the Oklahoma City Zoo on New Year’s Eve 2007, when Mayor Mick Cornett acknowledged the community’s (portly) stature as one of the nation’s fattest cities. He drew national attention with his website thiscityisgoingonadiet.com, and called on residents to drop a combined 1 million pounds.

Cornett made his point, inspiring tens of thousands of people to log in, sign up and lose weight. Perhaps more importantly, he started a conversation about healthy living and how that can improve quality of life, as the city launched a new set of proposed projects under the 2009 MAPS 3 initiative.

The $777 million measure passed, and much of that money was dedicated to making Oklahoma City a healthier place to live through construction of new amenities such as sidewalks and trails.

Nearly $40 million in MAPS 3 money is being used to pay for the construction of 27 miles of new paved trails for cyclists, pedestrians and anyone else who is not driving a car. When complete, Oklahoma City’s trail system will be 30 percent larger and have segments stretching across the city.

The West River Trail opened in 2015. It stretches 8 miles from trails along the Oklahoma River through native woods, around shores and over scenic areas, eventually ending at Lake Overholser on the city’s west side.

In October 2016, the city broke ground on the Will Rogers Trail, another 8-mile stretch connecting Lake Hefner with the Oklahoma River. Tankard said the trail is scheduled to open in 2017, and serve as the spine of the entire trail system. The urban route will link northwest Oklahoma City with Will Rogers Park, the State Fairgrounds and the Oklahoma River. It will provide a safer route for bicycle commuters to reach downtown, Bricktown, City Hall and a multitude of neighborhoods. 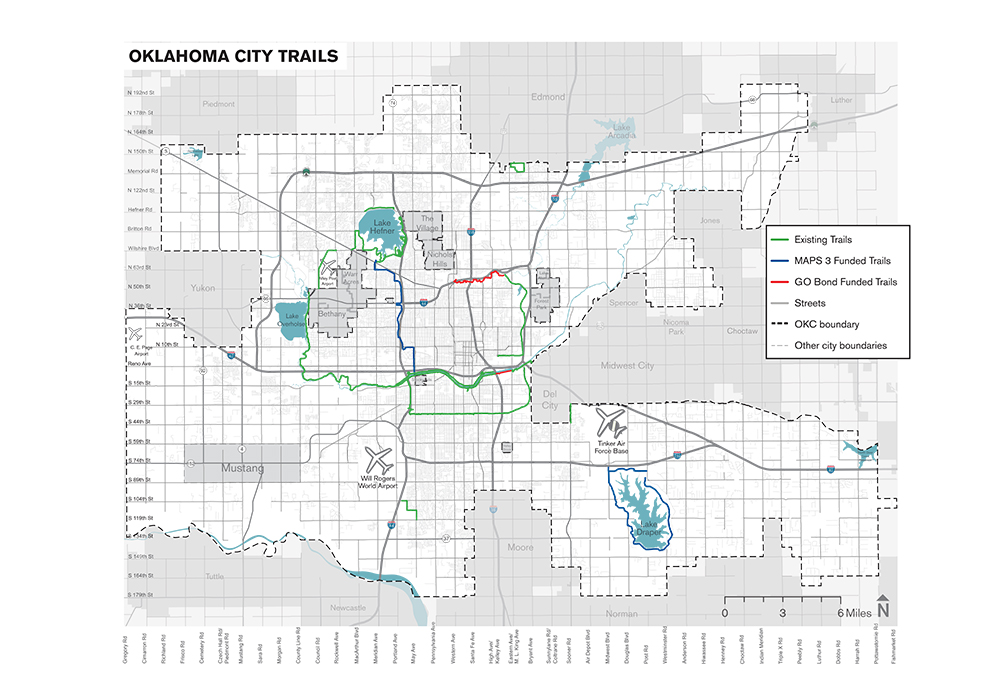 Finally, construction of the Draper Trail could begin by the end of the year, allowing cyclists, pedestrians and others to follow a 12-mile loop through a hilly landscape of woods, grassland and wetlands that surround Draper Lake.

Once the three projects are complete, the city will have more than a dozen trails that cover nearly 100 miles, and Tankard said funding for more trials could be added to a general obligation bond issue the city is planning to propose later in 2017.

Tankard explained that the trails are part of a larger initiative called Bike-Walk OKC, a bicycle-pedestrian master plan for building a transportation network that promotes safer, healthier and more enjoyable transportation choices. In all, Oklahoma City has more than 300 miles of trails and bike routes.

If people have opportunities to ride their bikes, run or walk on trails, the city could see reduced obesity, diabetes, heart disease and better mental health, said Tankard.

Hal McKnight, longtime cycling advocate and member of the MAPS 3 Citizens Advisory Committee, said Oklahoma City’s trail system will continue to expand and he is excited about the future.

“Trails have been a strong passion of mine for a long time,” he says. “Within the next several months, we are going to have a trail system that any city would be proud of.”