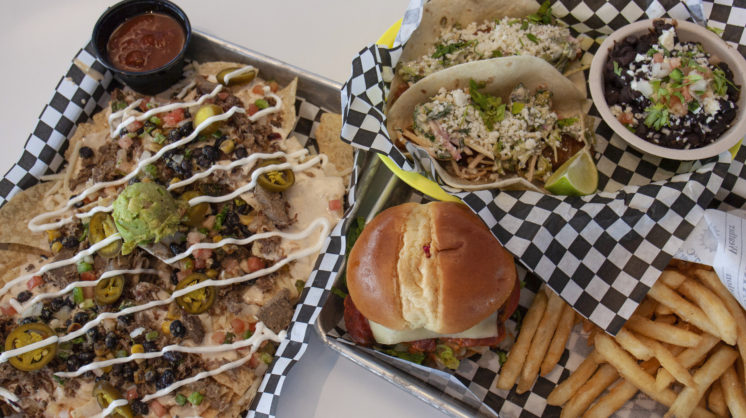 Chef Nathan Frejo assumed the reins of Big Water Grill at RIVERSPORT in 2021, and one of his first tasks was to help guests overcome the notion that he was running an amusement park concession stand.

“Everyone has preconceived notions of what amusement park food is,” Frejo said. “We’re not strictly an amusement park, but people are here to play and be entertained, so we had to avoid the snack bar mentality.”

Walking into an operation where great food had not been a top priority meant that Frejo also had to get people to actually try the food, not just order something that sounded familiar.

“We got a lot of ‘I’ll have the chicken tenders’ at first,” Frejo said, “and I understand, because if everything comes out of a bag or box, chicken tenders would be the best choice.”

But Frejo wasn’t doing frozen food from bags and boxes; he was bringing experienced chef skills to the task, and even when his dining room projections shrank because of the acquisition of a snow ski simulator, he didn’t quit planning to elevate the cuisine. At that point, it would have been easy to throw up his hands and go the snack bar route, but he’d been hired to bring vision and creativity to the menu, so he didn’t give up.

“We’re a recreational facility where people, even when they’re playing, are working on getting healthy,” Frejo said. “That means we had to think about adding healthy options and healthy twists to unhealthy food.”

He reviewed the sales from previous years, kept some top sellers during the transition, and focused on food his cooks could execute easily while he hammered out menus for Big Water Grill and the Trailhead Cafe at Lake Overholser. A year later, the menu is more of a known quantity, as are the top sellers, and bar manager Beth Easterly’s cocktail program is taking off.

What Frejo has done would be impressive at a diner, bistro or casual restaurant, but to do in the context of a “snack bar” is even more pleasantly surprising. The burger is one of the best in the city — under the category of “get ready to make a mess” — and every item on the menu gets a chef’s attention to detail and quality. The result is food worth going to RIVERSPORT for even if you’re not playing in or around the water.

His menu is kid-friendly, too, and that’s important at a place that sees thousands of young visitors every year. Instead of frozen pizzas, he’s making scratch crust for his pizza specials — like his latest with Huli Huli sauce and Hawaiian barbecue chicken — and a cauliflower crust for the build-your-own options on the regular menu. He’s added tacos to the latest menu, the full version of which will be available when RIVERSPORT begins summer hours May 28. For now, it’s Saturday and Sunday only.

Frejo is also adding rice bowls, and to make them a bit healthier, he’s using a blend of Chinese black rice and sushi rice, gaining whole grain benefits from both. He already has a Huli Huli bowl similar to the pizza, and he’s dipping into his Latino heritage to offer al pastor bowls and tacos. The tacos are new, too, and we’re hoping his gochujang chicken thigh taco makes the final menu. Amid all the other pleasant surprises, finding one of the best falafels — made from scratch — in the city was perhaps the capper. He’s also making it in smash patty style for his veggie burger, and it’s magnificent.

If you like bartop service and cocktails, Easterly has you covered. Even working with a limited backbar, she’s producing delicious frozen and traditional cocktails. Her use of Jameson Orange, which is suddenly everywhere, was the best we’ve found so far. She uses Frejo’s house-made cream soda with Jameson Orange to make an impossible-to-resist Irish Creamsicle. Her regular menu has 12 cocktails, and she’s hoping that the two frozen drinks will become four with the acquisition of more frozen drink machines.