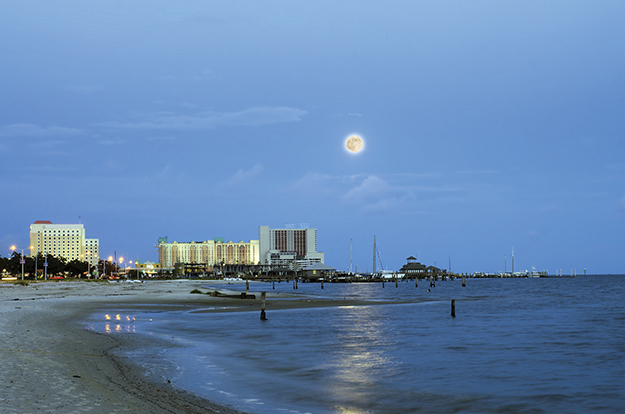 “Occasionally Down But Never Out” Could Describe Biloxi And The Mississippi Coast. They Call Themselves “Resilient” And So They Are – Surviving Hurricanes And The Oil Spill. But They’re Back On Top With Glittering Casinos, Beautiful Beaches, Charming Small Towns And A Booming Tourism Industry. And They Coat It All With That Famous Southern Hospitality.

The first tourist to Biloxi was Pierre Le Moyne, Sieur d’Iberville, who landed on the coast in 1699 … the first European, but certainly not the last. By 1720, there was enough activity in the area to qualify as a settlement but it wasn’t until 1838 that Biloxi was officially incorporated.

Although many early buildings have fallen through decay or disaster, there are still remnants of early days with several buildings claiming birthdates in the 1730s. A brochure guides visitors to interesting historic sites in downtown Biloxi.

Perhaps the most famous old house in Biloxi is Beauvoir, the home of Jefferson Davis, former president of the Confederacy. In 1877, Davis, then 69, was looking for a place to retire and write his memoirs. A family friend owned Beauvoir and invited Davis to work there. Upon her death, she left the home to Davis, who lived there with his wife and daughter until he died. Mrs. Davis eventually sold Beauvoir to the Sons of Confederate Veterans as a home for veterans and their widows. It later became, and is now, a house museum and presidential library.

Biloxi and environs have experienced two horrendous hurricanes in the past half-century. In 1969, Camille came ashore with 210-mph winds and a 24-foot storm surge. Many businesses, attractions and homes were washed away. In 1992, the state legalized gambling and the gaming industry put the town back on its feet.

In 2005, disaster struck again with Hurricane Katrina. Katrina’s winds were slower than Camille’s but the storm surge was worse – 34 feet. Who can forget the sight of Robin Roberts in the wreckage of her hometown in nearby Pass Christian? Destruction and job losses were devastating, but the casinos bet on recovery and rebuilt within the year.

Bad PR, rather than oil damage, during the 2010 BP disaster slowed the tourist influx again. Oil was largely absorbed by barrier islands. The gaming machines at the casinos kept the economy going and now things are back to normal – a new normal but very attractive.

The gaming machines spin and ding 24 hours a day at many of the 12 casinos in Biloxi and nearby towns. Most have headliner entertainment. Jack and I stayed in the huge Beau Rivage, a beautiful hotel/conference center/casino. We were particularly impressed with the fantastic flower arrangements throughout the facility.

Hard Rock is full of memorabilia from stars and Margaritaville is one big party with a definite beach theme. All casinos have a variety of eateries. The IP boasts two AAA Four Diamond restaurants. The Ruth’s Chris Steakhouse at the Hard Rock has a reputation for fine beef. The outdoor patio at Margaritaville overlooks the beautiful Biloxi marina and is a great choice during nice weather.

The Mississippi Gulf coast is 62 miles and three counties wide. We explored over 40 percent of it traveling from Pass Christian to Gulfport, Biloxi and Ocean Springs. All of these towns were badly damaged by Katrina but all have rebuilt and have interesting stops to offer.

The Pass Christian Soap Company was a great recovery story. Started in owner Paula Lindsay’s kitchen, the company had grown into larger quarters and was experiencing good growth before Katrina. Was the company all washed up after the hurricane? Nope. Thanks to faithful customers and great products, they rebuilt bigger and better. Pass Christian bath and body items have been featured in national TV and magazine stories and were included in nominees’ swag bags for the 2009 Grammys.

Another interesting stop was Oak Crest Mansion Inn. Floods have washed away records, so there are various stories about the house’s history. Most tie its first owners to the Dixie mafia and claim the house was involved in production and distribution of booze during Prohibition. Rumors say there are tunnels under the property leading to Bayou Portage and a liquid highway for liquor.

Its most recent owners purchased the house in 2007 and, a million dollars and a year later, opened the property as a bed and breakfast. The furnishings are luxurious and the breakfasts legendary. And it’s a beautiful setting for weddings.

We channeled our inner Dr. Doolittle in Gulfport at the Institute for Marine Mammal Studies. This cool multi-purpose organization – education, research, conservation and rescue – includes a hands-on museum and dolphin encounters.

Ocean Springs, five miles east of Biloxi, features tree-lined streets and interesting shops and boutiques. It’s also a mecca for art lovers. A good deal of the credit falls on a large and unusual family – the Andersons.

Two names you’ll hear often are Peter and Walter, born in 1901 and 1903. Peter founded Shearwater Pottery, still in business and still in the family. Walter, his brother, was an artist who worked in many media. Many of his works can be seen in the wonderful Walter Anderson Museum of Art – both the pottery and the museum are must-sees. Contemporary adaptations of Walter’s works can be purchased at Realizations, a great little shop owned by members of Walter’s family, in the old railroad depot.

Our trip had many highlights but one of the highest was a deep-sea fishing trip with Captain Kenny Barhanovich. The weather was perfect; the seas gentle. Several of us caught fish – a couple of jack crevelle and several Spanish mackerel. The fishing was slow but the day was so glorious, we didn’t care. We breathed deeply, enjoying the combination of salt and warm fall breezes. The name of the boat perfectly described our experience, indeed, the entire trip; Miss Hospitality.