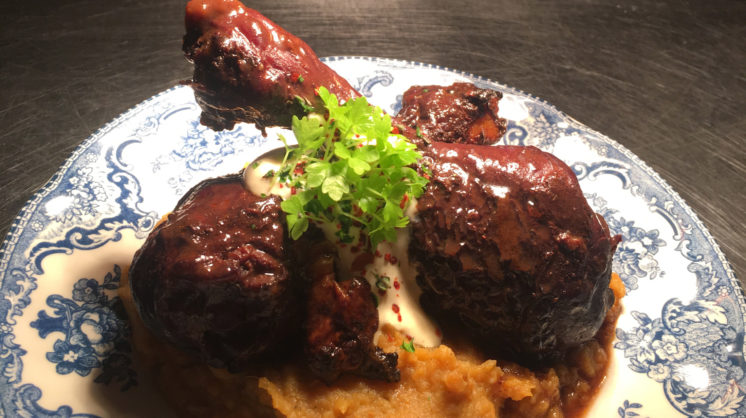 One of the principal gaps in our city’s culinary landscape is late-night dining – that’s local joints, not forays to Taco Bell at 2 a.m. Russ Johnson, executive chef and operating partner at Ludivine, created a new Late Night Blue Plate “menu” to help offset some of that deficiency.

“We used to do late-night food, but that changed when we opened R&J Supper Club,” Johnson says.

“We moved the late-night menu there, partly because our kitchen staff already worked a twelve-hour day without late-night service.”

The Late Night Blue Plate will feature a hot entrée on Friday and Saturday nights after the kitchen closes at 10 p.m.

Johnson kicked it off on Friday, January 20, with coq au vin. Basically, the kitchen will place a crock-pot meal in the bar at the close of dinner service, and the bartenders will be able to put an order together in under a minute.“The idea is to make food in keeping with what we already do without interrupting the flow of the bar,” Johnson explains.

“I have a panini press, too, and we may add that eventually.”

The target price is $10 for the dish for now, so a small meal and a cocktail can now be had for under $20, thanks in part to the new Craftwell cocktail program bar manager Chris Barrett started in December.

“Ludivine has been known as the $15 cocktail place,” Johnson says, “so we wanted to offer quality cocktails that use well liquor instead of our normal top-shelf spirits. You still get our bartenders’ expertise and quality mixers, but at a half to a third of the price.”

The Late Night Blue Plate will feature hot food on Friday and Saturday, and charcuterie on weeknights. Johnson said the change is a trial program for now, and they hope to expand if the demand is present.