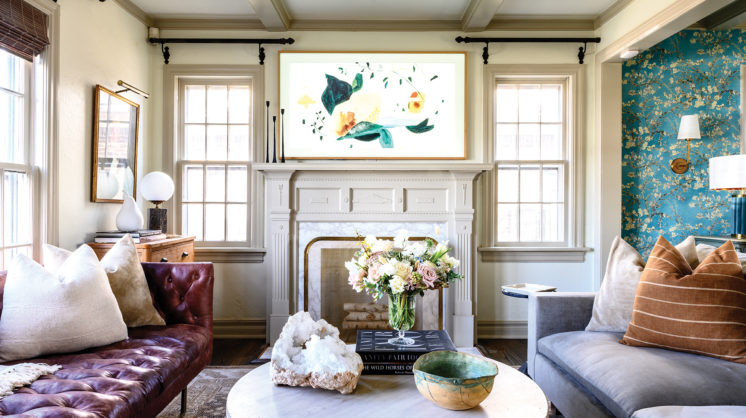 Large windows that flood their living room with a lot of natural light and coffered ceilings make the living room of Chad Previch and Jordan Nichols a comfortable place to gather right off the dining room. A Samsung Frame TV above the fireplace disguises the traditional black screen in favor of their choice of a digital artwork, which they control through the related Samsung TV app. The fireplace has a Cararra marble surround and decorative wooden friezes original to the home. A previous owner created all of the home’s metalworking, which the couple left up without curtains as a decorative detail. The room is painted Dove White with Revere Pewter trim, both by Sherwin Williams. They salvaged the grey couch from the fire and cleaned it; the leather one had been left behind for staging. The coffee table is from McGee & Co. The geode came from NOLA Rock Co. in New Orleans; the handmade pottery bowl came from Nichols’ dad. “The living room is one of the most relaxing rooms you’ll ever be in. it’s very peaceful,” Previch said.

In 2019, Chad Previch and Jordan Nichols had recently moved out of one historic home they loved in favor of another one they loved in the Plaza District. But just as the couple put their vacant two-story Shepherd Historic District home on the market for sale, their Plaza home caught fire amidst ongoing renovations and burned.

So back to the Shepherd district house they moved, finding it the perfect haven as they rebuilt their Plaza home and as the pandemic confined them at home, including for work, more than usual.

“After the fire, it felt safe. It was like a safe place to return to, and it’s really just worked so well for us,” Nichols said.

Nichols is a set stylist for Hobby Lobby, designing project sheets for inspiration and styling items for social media. Previch is external communications manager for Love’s Travel Stops. The two have known each other for years – they met through a mutual friend – and started dating in 2015. In November, they’ll celebrate their third wedding anniversary.

They’re looking forward to their Plaza District home rebuild being complete as early as this spring. But they also have focused on changing things up in their current home, which is nearly 2,000 square feet and built in 1939. Moving back into it after the fire gave them a chance to look at its design with a fresh eye, the couple said.

Both acknowledge that Nichols has the eye for design and detail that has contributed to their home’s charm since they first moved in and joke that Previch has had a lot to learn over the years.

The first time Previch and Nichols moved into the Shepherd district home, they loved the quiet, family-friendly street that was a much better place for their dogs. They loved its charm and the metalworking accents added inside by a previous owner. At the time, though, every wall was a different color – blue, lime green, a brown ceiling, etc., and in one place all the colors came together in one spot where the walls met, the couple said as they laughed. 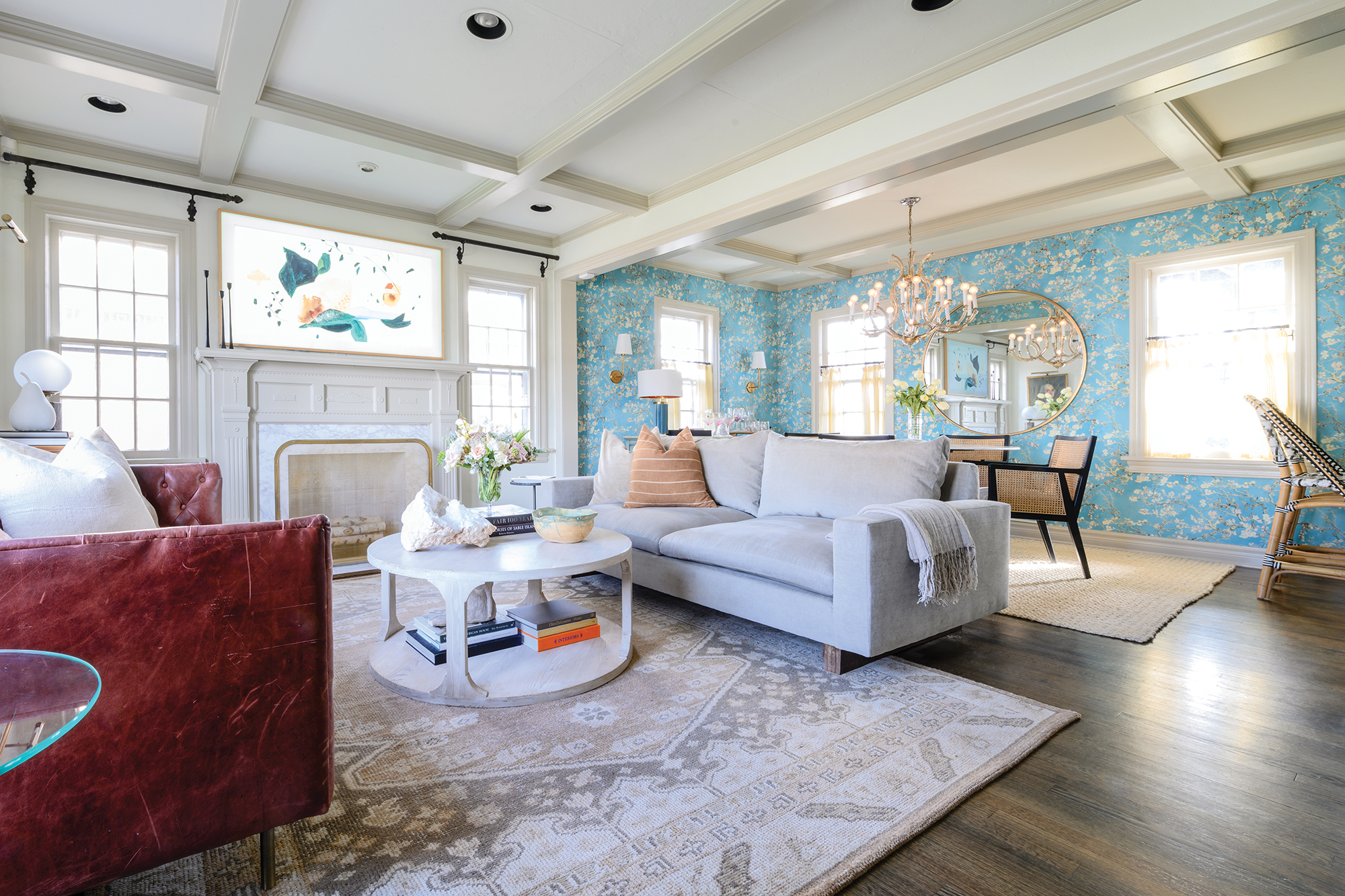 Then color-averse, Nichols painted the interior of the house white and other neutral colors.

“My style is very neutral. I love color. I have like a secret crush on color, but I have never been brave enough to really do it in my own house,” Nichols said. He noted that a visit to the colorfully decorated Bradford House, the newly opened boutique hotel in Oklahoma City, emboldened him to play during their second stint in the Shepherd district home.

At the Bradford House, “it’s like color exploded in your face. And I just loved it,” he said. “And so I was like, you know what? I’m going to experiment a little.”

That’s when Nichols, who once was a floral designer, found the turquoise floral wallpaper he loves – Van Gogh Blossoming Almond Trees from Walls Republic.

But idea of using so much blue freaked him out, and he hesitated at first. Now they both love it.

The openness allows for an easy flow of traffic from the kitchen to the dining room to the living room and also lends itself to entertaining, which the couple loves to do when there isn’t a pandemic. They host small gatherings with close friends as well as a big Halloween party in normal years.

Their cheerful, cozy home, today reflects the life they have created together and memories they have made. A large geode from the NOLA Rock Co. in the French Quarter of one of their favorite cities to visit – New Orleans, La. – sits on the coffee table in their living room. They talk of another New Orleans find – a heavy antique crystal chandelier – that required the strength of both of them to carry through the French Quarter back to their hotel room. It fell during the fire but survived intact (they replaced some of the crystals with modern bulbs), and it now hangs in their dining room, packed with sentimental value.

When they move back into their Plaza District home, they’ll bring with them their dogs, Baker, a boxer mix, who was the only one of their four dogs that survived the fire, and Harper, a golden doodle. They’ll put their current Shepherd Historic District home back on the market. They’ll likely keep broadcasting the “Wild Society: True Crime Podcast” that they do together for fun each week, discussing bizarre crimes with friends.

And they’ll also bring with them to their new house a mix of memories, laughter, old and new items and the gratitude that has carried them through this far.