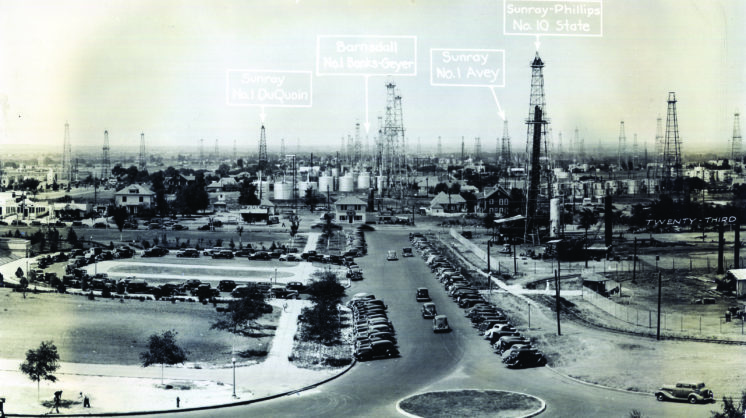 Oklahoma City’s early years were rife with national and international attention. First came the series of land runs beginning in 1889, followed by immense oil and gas production that conferred petroleum superstar status onto the young territory.

By the time Oklahoma reached statehood in 1907, it had become the largest oil producer in the nation, according to the Oklahoma Energy Resources Board.

Then, in 1928, Indian Territory Oil Illuminating Company and Foster Petroleum made a historic discovery with the Oklahoma City No. 1 oil and gas well south of the city limits. It revealed the vast reservoirs of oil and gas that lie beneath Oklahoma City, and would cement its culture and economy for the next century.

“Subsequent development drilling opened up numerous other reservoirs (in the Oklahoma City Field) including the Basal Oil Creek Sand and the prolific Simpson ‘Wilcox’ Sand. Initial flow rates in the ‘Wilcox Sand’ were nothing short of spectacular, often exceeding 20,000 barrels of oil per day and 20,000 MCFD (20 million cubic feet of natural gas per day),” according to the website Oklahoma Minerals.

But by 1930, a seemingly inevitable clash occurred between government authorities trying to set legal parameters and the oil companies that had been on a two-year drilling frenzy with very little regulation.

“Legal challenges and flagrant law violations led to chaos. Gov. William H. Murray declared martial law for 24 hours around the wells on May 5, 1932 (in support of the city council’s decision to limit drilling to one well per city block and restrict drilling activity to specifically designated sections of the city). This intervention was followed by another martial law action on June 6, 1932, followed by another of 10 days’ duration beginning on March 4, 1933,” wrote Bobby D. Weaver for the Oklahoma Historical Society.