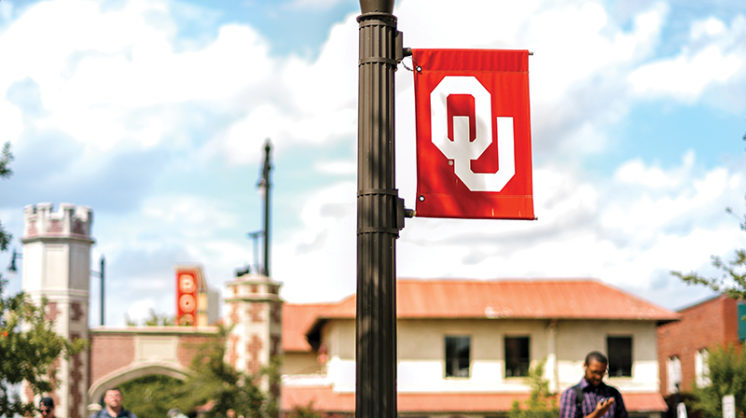 Since Abner Norman first surveyed the area in 1890, the city named for him has found its identity tethered to the University of Oklahoma, creating a symbiotic relationship that often made it hard to imagine one without the other. As the largest employer in the city, OU serves as the commercial and cultural beating heart of the community, and the town surrounding it provides the institution with the residences and services such a formidable university requires.

While OU continues to serve as a one-degree-of-separation first talking point in any discussion about Norman, the city’s recent growth spurt and commercial boom serve as signs of a city coming into its own and transcending its town-and-gown origins. Since the 2010 census, which put Norman’s population at a healthy 110,925 residents, the city’s Planning Department estimates that it welcomed more than 8,000 new Normanites, making it the third-largest city in the state. And with University North Park, the massive retail and commercial center that began on the north side 10 years ago, Norman has positioned itself as a major destination for long-distance shoppers from the southern half of Oklahoma.

“I was out in the parking lot, looking at all the license plates and the stickers on the day the HomeGoods store opened,” says Stefanie Brickman, communications manager for the Norman Convention and Visitors Bureau. “It was amazing to see what a draw it was.”

These developments, along with other arts programs, beautification projects and commercial ventures, serve as part of an overall movement to further improve the quality of life in a community that already boasted strong public education, arts programs and one of the best live music festivals in the state. It’s all part of moving Norman forward, which is what the city set out to do with its successful 2015 bond issue.

In October 2015, Norman voters approved a one-half cent sales tax to fund “Norman Forward.” The initiative, similar in concept to Oklahoma City’s MAPS, was designed to fund $209 million in “quality of life” projects such as improved public libraries, parks, schools and community centers. Only one Norman Forward project is a more traditional public works initiative: the extension of James Garner Avenue as a direct conduit between north Norman and downtown.

Extensive renovations will take place in 51 of 65 existing city parks, including nine new soccer fields at Griffin Park and a new baseball and softball complex at Reaves Park. In addition, five new parks will be constructed on the city’s east side, which will also be the recipient of a new library branch. Because Norman’s population has more than doubled in the 50 years since the construction of the Pioneer Library System’s central branch at 225 N. Webster, Norman will construct a new main library at a cost of $39 million, as well. 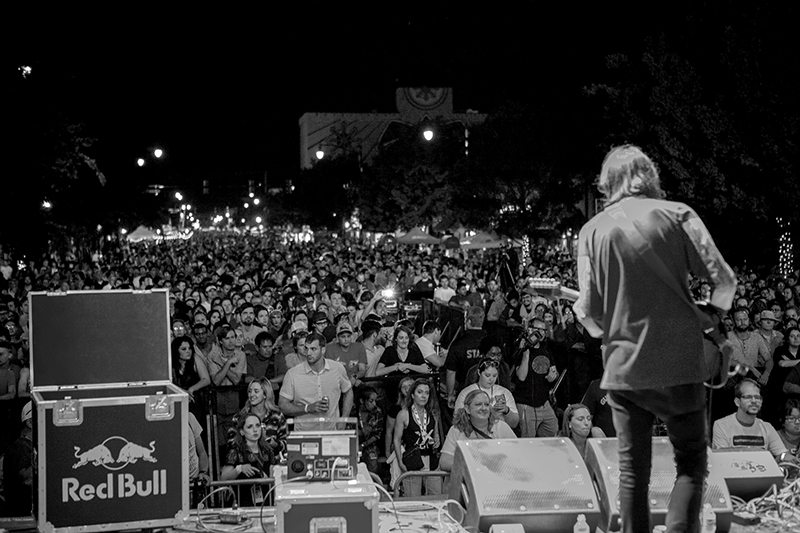 Art Is All Around

Norman’s commitment to fine art can be seen in the galleries of the Fred Jones Jr. Museum of Art, Jacobson House, the Firehouse Art Center, MAINSITE Contemporary Art and other great venues, but that civic dedication to artistic endeavor also helps biking enthusiasts secure their rides. Three years ago, the Norman Public Arts Board began a project to install functional art in the city’s burgeoning downtown Main Street Area, soliciting designs from area artists for bike racks. These were not the standard, gray, utilitarian racks that hold many a Schwinn at public schools and parks, but bright, colorful monuments to uniquely Oklahoman symbols, animals and even hometown heroes.

The first five installations of the project appeared on Main Street in August 2013, including a bison, an oil palette and a bike rack shaped like a bike. The project, funded by Fowler Volkswagen, came in several stages, culminating in April 2016 with artist Jennifer Robinson’s bike rack on Campus Corner paying tribute to Calvin Steves, the helmet-wearing Norman Transcript paper carrier who has sold papers in the area for more than four decades while continuing his battle with epilepsy.

“Downtown Norman is already picturesque, we’ve got these beautiful buildings and historical architecture,” Brickman says. “But now we’ve got these bike racks that add to the unique flavor and ambiance that only Norman can provide. It’s really exciting to be in Norman right now.”

Best of the Fests

In 2008, Norman Music Festival debuted as a single-day event with a headlining performance by The Polyphonic Spree, and while organizers originally forecast attendance at around 8,000 people, the original NMF pulled over 15,000 people onto Main Street. Before that day in April, no one knew whether Norman Music Festival would be anything more than a one-off event, but the day after Tim DeLaughter led his 24-piece Spree off the giant stage, it was on to the next one.

Six years later, in a Huffington Post feature titled “The ONE Thing You Must Do In Each U.S. State,” Norman Music Festival beat out everything else in Oklahoma – everything. On average, NMF added 10,000 attendees each year, reaching more than 80,000 by 2015, and featured a festival roster of more than 300 individual acts, and while the main stage hosts regional, national and even international acts, most of the artists on the festival’s multiple stages hail from Oklahoma. Almost every musical genre gets ample representation at NMF, and for music lovers wanting to hear what Oklahoma sounds like, the festival is a three-day crash course.

“I’m a proud board member of NMF – I’ve volunteered for several years – and we’re in the planning stages for NMF X,” says Brickman, referring to the 10th annual production of the festival, which will take place in April 2017. “It’s had an incredible impact on community pride. It’s helping shape Norman’s image on a regional scale.” 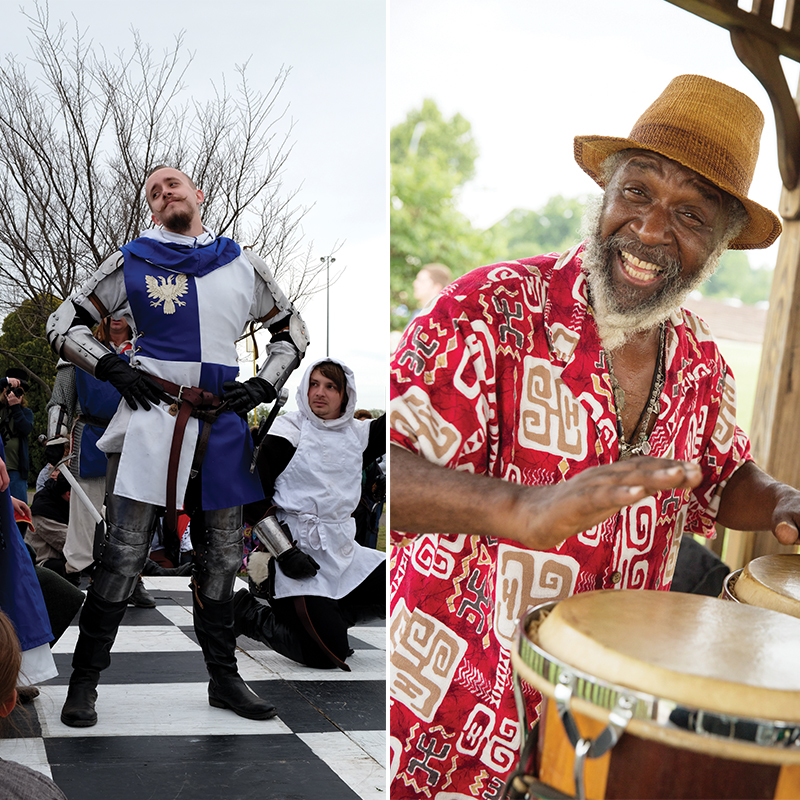 While NMF gets many of the headlines, it is only one of the festivals bringing thousands of visitors to the city. The Medieval Fair of Norman, which returns March 31-April 2, 2017, started in 1977, where it was staged by OU’s English department on the University’s South Oval as a celebration of William Shakespeare’s birthday. Within a few years, the Medieval Fair outgrew the confines of the South Oval and relocated to the OU Duck Pond, where activities such as jousting and the human chess tournament had room to flourish. In 1993, the fair expanded to three days, and 10 years later, it moved to Reaves Park, which was able to accommodate the estimated 350,000 who attend one of the few free renaissance/medieval fairs in the country.

Meanwhile, Jazz In June provides music lovers with a consistently superb jazz and education experience. Started by KGOU-FM in 1984, Jazz In June regularly brings in top-flight musicians and about 50,000 fans annually. The festival is a model of positive economic impact: it receives $40,000 each year from the Norman Arts Council and Oklahoma Arts Council and pours $2,227,500 back into the local economy. Beyond dollars, Jazz In June is one of the few events where Oklahomans can see legends such as David Sanborn, the Dirty Dozen Brass Band, Jeff Lorber and the Ellis Marsalis Quintet.

And there are smaller events, many of them are intrinsic to the character of Norman. Featuring over 60 fine artists and crafters, live entertainment, children’s activities and a 5K run, Brickman points to the May Fair Arts Festival in Andrews Park as an event that provides insight into the innate character of the city.

“It’s been going on since the early ’70s, and it’s a smaller event, but it’s sort of the heart and soul of Norman,” she says.

Add in the 2nd Friday Art Walk, the Firehouse Art Center’s annual Chocolate Festival in January, the National Weather Center’s annual National Weather Festival on Nov. 5 and the Oklahoma Wine Walk on the same day, and Norman offers plenty of opportunities to get together, get entertained, get smart or get full, and they’re maintaining tradition in a city that is growing both at the center and around its edges.

For every generation, Campus Corner has its ghosts: the beloved shops, bars, restaurants and venues that shaped OU students’ experiences before or after class. This means that visitors of certain ages will look up at the old Boomer Theater sign above the Chipotle and remember when they saw Talking Heads, The Specials or XTC there, or hoist pints at Louie’s at the same spot where they clinked glasses at Town Tavern decades before.

Change is difficult, but Campus Corner, which will celebrate its 100th anniversary in 2017, is thriving. Longtime staples of the district such as Victoria’s, Othello’s and Pepe Delgado’s share the block with more recent additions such as Hideaway Pizza, Seven47, Meatball House and Blackbird Gastropub. Retail continues to be a huge growth area for Campus Corner as mainstays such as the Apothem welcome newer neighbors like Lucca and Threads. Originally conceived as a haven for OU students before they were allowed to drive (yes, that was an actual rule in the early 20th century), Campus Corner is often the first stop when a good portion of Oklahoma’s population descends on Norman for Sooners games. 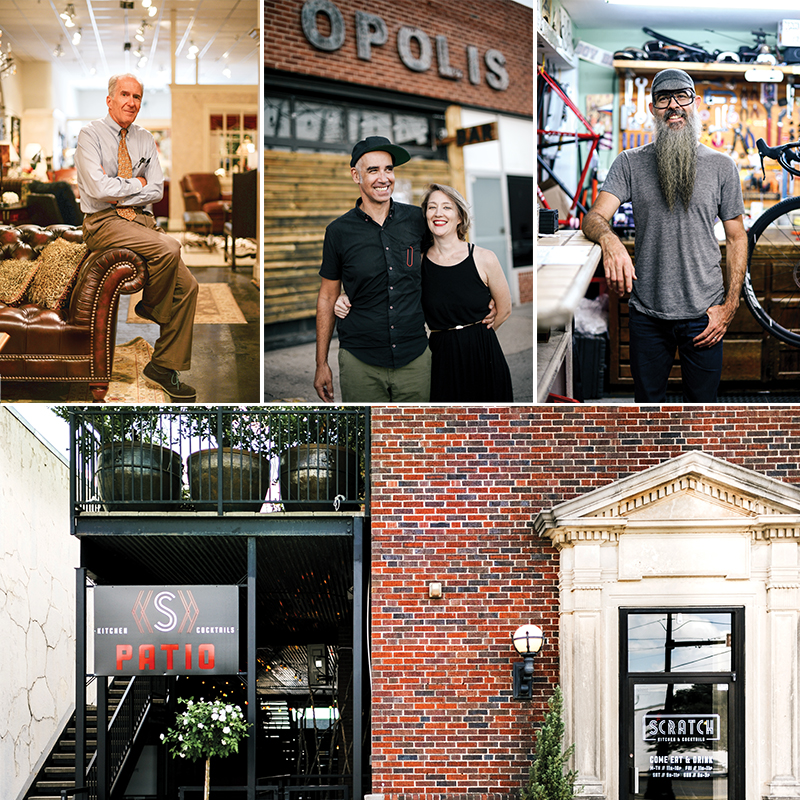 “When we’re talking to the sports writers coming in from Ohio for Ohio State games, we tell them, ‘Be sure to tell your readers to leave plenty of time for Campus Corner for pre-game,” Brickman says. “Not just 20 minutes – a couple of hours.”

While those visitors’ first impressions of Norman might come from driving through the University North Park district or past the towering Norman Regional Healthplex, the city’s center is now stronger than it’s been in decades. In the 1990s, downtown Norman suffered from the same maladies afflicting other small downtown areas: defection of businesses to the exurbs, boarded-up storefronts and disuse. But anchors such as Mister Robert Fine Furniture & Design and The Diner kept Normanites coming down to Main Street, and the past two decades have seen new investment in the district as a slew of new bars, restaurants and shops now populate downtown, with live music venues like Opolis providing a steady stream of national alternative acts and rising local favorites.

“Just in the 100, 200 and 300 blocks, you have Scratch, which is relatively new. You’ve got German food at Das Boot Camp, Puebla Tacos y Tequileria along with The Diner and Bison Witches, Full Moon Sushi, Syrup and Michelangelo’s,” Brickman says. “It really has become a 9 to 5 destination as well as a 5 to 9, along with a 9 until the wee hours. And you have way more than one place to hear live music these days.”

Of course, Norman will always be home to the Sooners and to Oklahoma’s largest state university, and that identity will always be there – forever intrinsic to how Normanites think of themselves and their community. But Norman’s growth and its evolution means that the city is not just a college town anymore, while retaining much of the character that attracted people to live and work there in the first place.

“As Norman has grown, it still feels like a small town,” Brickman says. “We all still work together.”

► Want to see more of the cultural texture that helps define Norman? Accompany photographer Cary Holton on a pictorial tour of Main Street, Campus Corner and more by clicking HERE.