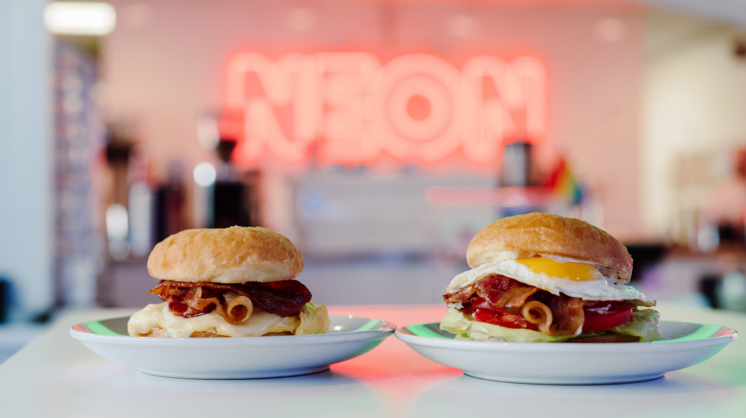 It’s time to talk about the return of the breakfast sandwich. Once America discovered the perfection of the breakfast taco and the delicious convenience of the break- fast burrito, breakfast sandwiches started disappearing from menus. The exceptions were places like New York City, where concepts from bodegas to bistros offer busy commuters foil-wrapped simplicity in the form of white/sourdough bread, orange cheese, egg and bacon, and the consuming public has a long-cultivated reverence for this simple, tasty meal. Fortunately for metro diners, the form is making a comeback in the 405, and we’re here for it.

Harvey Bakery & Kitchen opened at 301 NW 13th St. with two classic breakfast sandwiches on its menu: the BEC and the SEC. Perhaps because it shared a name with the hated (until OU joins) collegiate conference, the sausage, egg and cheese disappeared from the menu board. The good news is that if you walk up to the counter and ask for it, they’ll still make it, and if you ask for it on one of Harvey’s freshly baked English muffins, they’ll do that too. The genius, though, is the blending of American and cheddar cheeses to round out the sandwich.

Hatch’s (1101 N. Broadway Ave.) Incredible Eggwich is incredible because of pepper jam and jalapeño sourdough. Smoked cheddar punches up the flavor, and you can get it with hollandaise or opt for the more handheld route by subbing bacon for sauce.

Neighborhood Jam has its own B.E.L.T., but it’s finished with sriracha mayo and served on ciabatta. For vegetarians, they’ll sub a whole avocado, presumably for the bacon, but pick your own modifications.

Neon, at 1742 NW 16th St. in the Plaza District, is another place where it’s fun (for guests) to play with modifications. The coffee and donut shop from Rachel Cope’s 84 Hospitality offers a few items that aren’t donuts, including a breakfast burrito and two breakfast sandwiches, the latter on unsweetened donut “bread.” The ideal way to order (for the guest) is to add an egg to the BLT or to add bacon to the egg and Havarti cheese sandwich. It can be nap-inducing, but who doesn’t love a nap?

Scratch – Paseo’s (605 NW 28th St.) James Beard Award-nominated Chef Zach Hutton turned his potato bun into a loaf and sliced it into Texas toast for his sandwich. He used American cheese — it’s the meltiest — bacon and soft-scrambled eggs, and he’s thinking about call- ing the bread Oklahoma toast “because Texas shouldn’t get any credit.”

Social Deck and Dining at 1933 NW 23rd St. serves brunch-y fare on its regular menu, in addition to more traditional dinner options. The B.E.L.T. is its version of the classic breakfast sandwich. The abbreviation tells the tale: bacon, egg, butter lettuce and tomato with deviled egg mayo. That last bit is what makes this a must-try option in the metro.

Sunnyside Diner has a B.E.L.T. as well, but the L.A. Ham and Cheese for breakfast also deserves your attention. It’s a delicious combination of cream-cheese-scrambled eggs, smoky ham, spinach, jalapeños and tomatoes, all topped with cheddar and avocado.